A sure-fire way to stand out at the commercial gym as a knowledgeable and athletic trainee is by performing solid, ball-busting sets of Olympic lifts. Nothing else in the lifting game requires as much skill, timing, athleticism, and power as taking something heavy and flinging it up to shoulder level or beyond in one explosive burst.

It's out of respect for the presumed technical demands of the Olympic lifts that many lifters avoid them like post-workout soymilk lattes. "You gotta learn those lifts when you're young if you want to be good" they say, before returning to yet another ass-numbing superset of Hammer strength presses and concentration curls.

To a certain extent, they're right. Sort of.

What about folks who are interested in learning the Olympic lifts but have no intentions of trying out for the next Olympics? The effects the Olympic lifts have on fat loss and muscle growth have been well documented – why shouldn't recreational lifters try to safely implement them into their training programs?

To that end, here's an easy guide to learning two of the basic Olympic lifts: the clean and the snatch.

Achieving the desired catch position for the clean requires considerable mobility through the shoulders and wrists. Exercises like shoulder "dislocates" and static stretching the pecs, lats, and triceps will help optimize the quality of the wanted positions.

The second area of focus should be the thoracic spine. Foam roller extensions and a PNF intercostal stretch are your friends here. Nothing's worse than pulling some cleans with a bad case of the turtleback.

The number one thing to think about with Olympic lift technique is to have strong, responsive external rotators. This is dictated by several key muscles. Activating your rotator cuff muscles through face pulls, YTWLs, and dumbbell external rotations will help prime those muscles and assist in externally rotating the arm sufficiently to achieve a desired catch position.

Another key player in any Olympic lift are the traps. The traps drive the crucial shrugging action that "pops" the bar up to the transition point for the catch phase, and even the smaller, lower traps get in on the action by helping lift the ribcage. This promotes both good standing posture and a proper place for the bar to be positioned for a clean grip and for an overhead position. When programming, think trap-3 raises, pulldowns, and Yates rows.

There are many variations that fall under the category of "cleans":

The easiest to coach and to learn is the hang power clean. It's also usually the most useful to everyday lifters, so we'll stick with that variation.

Next, to make the lift happen, a triple extension of the ankle, knee and hip joints are followed by a powerful shrug action to launch the bar up to shoulder level.

To get the feel of the movement, take an unloaded bar (bigger guys may need to put 10 pounds or so on either side of the bar just so they don't manhandle it) and go through the triple extension drill you'll see in the following video:

Where many run into problems is in the catch phase, "it's all in the elbows." In his DVD Starting Strength, Mark Rippetoe uses a simple drill to emphasize the need for high elbows. Mark uses his hands as a target, and makes the lifter "high five" his elbows into his hands as quickly and sharply as possible. Even if you don't have a partner, you can still try this.

The trick is to focus on the linear path of the bar by using the upper body clean drill. As you can see, there's no lower body assistance – the purpose is to emphasize achieving the correct catch and position while standing tall.

Don't be afraid to pull slowly for this particular drill. Starting with the bar already in the rack position also helps get the right "groove."

The feet should leave the ground briefly, and you should "stomp" the floor mildly to coordinate the timing of the phases.

Unlike the power clean from the floor, most won't be able to pull mind boggling weight from the hang position. For this reason, it can be implemented more readily into your conditioning workouts as a tool for a high tempo, fat burning exercise.

I'll use the power snatch from the floor in this case. When performing a snatch of any kind, remember to grip the bar at least one full fist outside standard bench press grip, if not more. The remaining set-up mechanics are surprisingly similar to the previous lift.

Remember, based on human anatomy and biomechanics, you're not going to be as powerful moving the bar from the floor to the knee level as you will be moving it from above the knee (already in motion) to overhead. So don't intend to have full acceleration before the bar crosses the knee.

Use that landmark on the upper leg (somewhere around where the pockets end in your pants) to serve as a "launching pad" for the bar to blast upwards. There will be a high pull involved, though not as distinct as the one used for the clean.

As the bar transitions upwards, remember to get your head and chest through the "window" you've created with your arms, just as you would in any standing press.

Note: if you don't have bumper plates, using weights that are smaller than a 45-pound plate will bring the bar closer to the floor, which for less flexible lifters could wreak havoc on the lower back. If lifting with regular weights, mount the bar on a couple of steps or low boxes to get the same height advantage as the bumpers affords.

A common mistake I've noticed performed in the snatch is the need to "lock out" the bar at the top of the lift. This can be a product of two things: the weight being too heavy, or not enough "dive" underneath the bar.

Again, in a full snatch (the kind you'll see performed in the Olympics), the lifter will drop right under the bar into full overhead squat position. Since we're just doing a power snatch, this degree of depth isn't necessary, but there still needs to be a transition of slightly "pulling" your body under the bar as the weight moves to the top.

Let me humbly state that there are thousands of articles, videos, and YouTube clips dedicated to aspiring weightlifters who wants to improve their performance of the Olympic lifts. If you're already a semi-proficient Olympic lifter, well, you basically just wasted 10 minutes of your life by reading this.

Yet as informative as these highly detailed articles are, they often neglect the lifter who's just after some athletic muscle. Some guys (and girls) want to incorporate technically sound Olympic lift variations into their programming for strength, power, and fat loss. It might not be the Olympics but it's a worthy cause nonetheless!

A thumbless grip can help you prevent or work around shoulder issues. Here's how to do it safely and effectively.
Overhead Press, Shoulders, Tips, Training
Dr John Rusin November 6
What's the quickest way to take your physique to the next level? Give up? Well, the answer depends on your calf insertion points. No, I'm not kidding!
Training
Don Alessi December 27 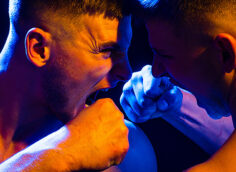 Open your mind and get better results from your training. These topics just aren't worth fighting about.
TJ Kuster August 18