T Nation is deeply saddened to announce that strength coach Charles Poliquin died last night, apparently from a heart attack. We can't begin to tell you what a void this leaves in the strength training and bodybuilding communities.

He trained scores of professional athletes and Olympic medalists, and his methods were widely copied by others. He influenced thousands of clients, coaches, trainers, and readers, and no one was more passionate about weight training.

Perhaps surprisingly, it was the 1975 film, "Hard Times," starring Charles Bronson, that triggered his interest in strength training. He took one look at Bronson's sinewy arms and he knew what he wanted to devote his life to.

He was constantly experimenting. Every gym was his laboratory, and every trainee a guinea pig (ultimately a successful guinea pig, but still, a guinea pig). He was so interested in weight-lifting research that he actually learned German just so he could read the strength-training research articles that were coming out of Germany in their native language.

I was lucky enough to begin working with Charles in 1995 at Muscle Media 2000 magazine. I'd heard about this wildly unconventional, wildly iconoclastic strength coach from Canada who was talking about stuff no one in the mainstream weight-lifting community knew anything about. And when he submitted his first article, it made me, and thousands of readers, start thinking about weight training differently.

Soon after, he published his first book, "The Poliquin Principles," which remains a bodybuilding classic.

Later, he followed me when I went to work for Tim Patterson and T Nation. He became a regular contributor, writing many of the early articles for T Nation. We also became good friends, and he visited me at my home whenever he was speaking or conducting a seminar in the area.

Aside from being the most knowledgeable person I'd ever met on the subject of weight training, he was the consummate prankster, the guy who had nicknames for everybody (that he liked), the sarcastic quipster who didn't suffer fools gladly.

Charles leaves behind his adored daughter, Krystal, his brothers Michel, Daniel, and Louis, his cherished sisters, Isabelle and Stéphanie, thousands of friends, and millions of readers.

We, and the weight-lifting community, will miss him greatly.

Most people shouldn't even try it. It's not for them. It very likely isn't for you. You can't handle it. Check it out anyway.
Bodybuilding, Powerlifting & Strength, Training
Charles Poliquin June 11 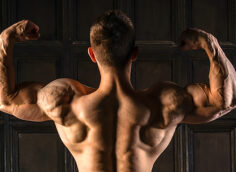