I know, I know, chances are you don't give a rat's patootie about rotary stability.

Hell, chances are you can't even define rotary stability.

Well, Jell-O core, you should care about your rotary stability. Most lifters simply need more of it. I've known plenty of bilateral badasses who were simultaneously unilateral eunuchs. Case in point, at the last commercial gym I trained at, there was a lifter who could good morning 400 lbs., yet couldn't perform a single bodyweight Bulgarian split squat.

When I showed him how to perform Pallof presses, he was shakin' like Shakira. This meathead was lacking rotary stability, and it's no surprise that he was continuously on the disabled list or training through nagging hamstring, groin, and low back injuries.

Initially, most beginners possess the leg strength necessary to perform a Bulgarian split squat, however they often lack hip stability in the frontal (side to side) and transverse (rotary) planes.

This is why full range single leg quad dominant and hip dominant movement patterns should be considered rotary stability exercises – they challenge the body's ability to remain stable under dynamic hip flexion and extension.

The Benefits of Increased Stability 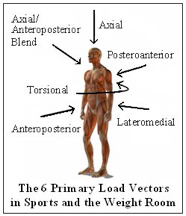 A body in balance is a body that will stand the test of time, and many lifters display imbalances by showing disproportionately low levels of rotary stability in comparison to axial stability. Why is rotary stability so important?

Now I'll be the first to admit that I don't like doing wimpy stuff. I love to move some serious weight. For this reason, performing the big basic bilateral sagittal plane lifts such as squats, deadlifts, bench press, and chin-ups are paramount. These lifts are the most popular strength training exercises for great reason - they work!

But if you only do these lifts, problems are bound to arise because you won't possess optimal levels of rotational strength and stability due to the fact that these lifts don't present sufficient rotary challenges for the core.

Stability is Vector Specific – Squats and Deadlifts Don't Cut it

Furthermore, many people consider the hips to be part of the core. Deadlifts are not very challenging for hip stability, as the deadlift is a simple bilateral hip hinge pattern.

Neither are squats, done the way that most lifters do them, which is only a quarter or half the way down. Full squats do indeed require hip stability, particularly in respect to preventing valgus collapse/knee caving by keeping the knees out, but single leg work trumps bilateral work for hip stability any day of the week. 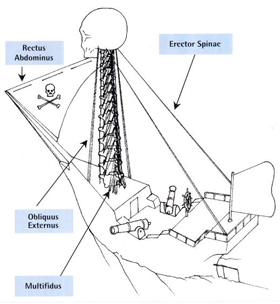 Back to the topic of spinal rotation muscles. To give you an idea regarding how many core muscles are working and how hard the core muscles are contracting during rotation or anti-rotation exercises, consider the following. Legendary spinal biomechanist Stuart McGill measured the compressive loads on the spine when torque was produced from different vectors.

In case you didn't know, when muscles contract, they shorten and create joint forces. Spinal and abdominal muscles are no different – their architecture can be analogous to the rigging of a ship's mast.

If none of this made any sense to you, perform a simple Pallof press with a moderate load and notice how hard the core muscles "clamp down" on the spine.

Lately I've been performing Pallof presses with a sumo-stance, which allows me to go heavier, and it's not uncommon to hear my back cracking from the extraordinary muscle force. Many lifters fail to realize that the amount of external loading is not the main contributor to spinal loading. Muscular contractions create the bulk of spinal loading, and muscle force is highly influenced by lever lengths and acceleration in addition to mass.

The following plan is sure to get you underway to ironing out your deficits in rotary stability. But before I outline the plan, I want to state up front that the strategy here is quality over quantity.

You don't need to take any sets to failure, nor do you need to max out on any lifts. Powerlifting guru Louie Simmons has preached the importance of special workouts for years, and they're a very efficient way to bring up a weak link.

What you need to do is add three "supplemental workouts" to your existing routine, spread at least 48 hours apart.

When you perform the following exercises, try to remain as stable as possible through the lumbar spine and hips. You can certainly load up the exercises and go heavy, but the goal is to groove efficient motor programs, not to move the heaviest amount of weight or induce the greatest amount of fatigue.

Stability is just as much about timing and synchronization as it is about muscle stiffness and strength.

Furthermore, by staying away from maxes and sets to failure, you'll reduce muscular damage and fatigue, which will allow you to train more frequently. This is good for neural adaptations. And since you'll be adding these workouts to your existing program, you'll already be receiving strong hypertrophy, strength, and power stimuli. These special workouts will simply introduce a frequent stability stimulus to the equation.

There's a lot of leeway in this plan since special workouts don't need to be very structured. You're going to pick one or two exercises from each category and perform one to three sets of 3-10 repetitions.

(If you don't like this much freedom of choice, I'll present a sample workout after this lengthy list.)

Here's an example of a special rotary stability workout:

Actually, this is more of a hybrid of a step up and reverse lunge as the elevation is very high. You can do this from a small box or a high box, and the load in the opposite hand places an increased rotational challenge on the glutes. You don't need as much load when you go the contralateral route (in comparison to the two-dumbbell approach) to receive an amazing training stimulus.

This is probably the most difficult bodyweight single-leg hip-dominant exercise there is. If you perform it correctly and control the lateral and rotational forces through a full range of motion – starting from a seated position and rising up into full hip extension – even performing ten quality repetitions is difficult. Squeeze the lockout for a second.

The single arm crossover is a great core exercise that employs a very long lever. For this reason, you don't need as much resistance to elicit high muscle forces. At first this will primarily be a core exercise, but as your core gets stronger you'll receive an amazing pec workout along with it.

Sure, everyone has done this exercise a million times. But this time try to get really good spinal position including some strong thoracic extension. Get a wide base so you can go heavy, and try to keep the lumbar spine completely motionless throughout the movement.

This exercise works the anti-rotation muscles through the opposite vector of the cable crossover, and you end up feeling it more on the posterior side of the body. When your core gets strong this will serve as a good rear delt exercise as well.

Finallly, we end on the half kneeling cable anti-rotation press. This is in my opinion the best anti-rotation core exercise in existence. It's the only strength exercise that makes me feel like I get 100% of my rotary power into the lift, and it hammers the spinal core muscles in addition to the glute. I've gotten very strong at this lift and my glute actually starts burning like crazy when I perform this movement.

Many lifters, trainers, and coaches aren't fully aware of how effective cable chops, cable lifts, and Pallof presses are. They glance at them and write them off as sissy movements. Don't make this mistake. Give them a try and I guarantee you'll love them. You can use a rope but I prefer the Gray Cook bar. The long lever involved in the Gray Cook bar makes the exercise incredibly effective. You have to experience it to really appreciate it.

Shout Out to Cressey Performance

I didn't try many of these exercises for years because I underestimated their effectiveness. I'd rather pile on a bunch of plates and perform some heavy bilateral lifts than perform a bodyweight exercise or an exercise that had me holding onto a light dumbbell.

If I did do unilateral lower body exercises, I'd load up a barbell with 225 lbs. and perform heavy walking lunges. I didn't want to take the time to find an elevated platform, nor did I want to hold onto a load with one hand when I had two perfectly functioning hands to grip with.

Last winter one of Cressey Performance's former clients started training with me. As most of you know, CP trains mostly baseball players and rotary stability is especially important for that population. When looking at my client's former program, I noticed that he had tons of rotary stability work naturally built into the program.

Eric and Tony's (Gentilcore) programs contained plenty of single leg and single arm stuff, which was interspersed throughout the routine.

I decided to give some of these variations a try and I was instantly sold.

Please don't make the same mistake as I did. Just try some of these movements and you'll be sold.

The good news is that rotary stability doesn't take years to obtain. Hit it hard for a month and you can dramatically increase your ability to remain stable during tasks that contain a challenging anti-rotation component.

In the case of the dysfunctional meathead mentioned above who could good morning the house but couldn't perform a single Bulgarian split squat, one month of time is all it took to bring him up to speed.

By adding in three supplemental rotary stability workouts per week for one month, he could perform two sets of ten Bulgarian split squats, which isn't bad considering that he weighed 280 lbs.

Furthermore, he was using 40 more pounds on his sets of Pallof presses and cable chops and lifts than he started with, and with better form. The past year is the first year in the past five that this lifter has trained hard and didn't suffer from a serious hip or back injury.

Now if that doesn't sway your feeble core, I don't know what will. 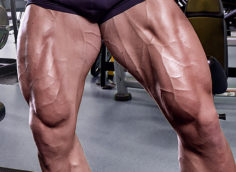 Do this one at the gym, at home, or in front of your ex's house at midnight. (Okay, maybe not that last one.)
Training
Ryan Sapstead January 21

This elbow-friendly exercise will blast your triceps like nothing else. It's like a hybrid between a pullover and an extension.
Arms, Bodybuilding, Exercise Coaching, Tips
Akash Vaghela April 13