The bodybuilding/strength training world is a wild and wooly place.

Prior to the early 90's, hardly anyone used scientific references to support their notions – not in real life and certainly not in the magazines. You just said what you believed and most of the time no one questioned you.

Then some smart-ass named TC started to use references in a good number of the articles he either wrote or published in a magazine called Muscle Media 2000.

Talk about opening Pandora's Box! Now nobody can get away with saying anything without giving at least a dozen references.

I happen to think that's bad. It squelches creative thinking. It put the kibosh on a lot of new ideas.

So, in an effort to take things a step back, I asked 8 Testosterone coaches the following question:

"What do you believe to be true, even though you can't prove it?"

Four of their answers were posted last week. Here are the remaining four:

"On any given set, when force output dips below 90%, your cost-to-benefit ratio for that set becomes disadvantageous." – Charles Staley

I've always believed that anytime you perform a set, the outcome is not purely positive – there are also costs involved. These costs include (but are not necessarily limited to) pain, energy, risk of injury, time, impaired recovery, and immuno-supression.

So like any system, training is a "conveyor belt" of sorts, where the input consists of various resources, which are (hopefully) converted to a worthwhile output, in this case, a training effect.

So the question becomes, how do we ensure that the cost-to-benefit ratio of the system is favorable at any given point? In other words, if you're performing a set of military presses with an 8RM weight, do you get the best output by going to the limit – 8 reps?

Or do you stop somewhere short of that? Many coaches suggest leaving one rep "in the bank," presumably to safeguard against injury or overtraining, or both. Others advice stopping the set at the point of "technical breakdown," meaning, the point where momentary fatigue forces alterations in your posture as you lift the weight. 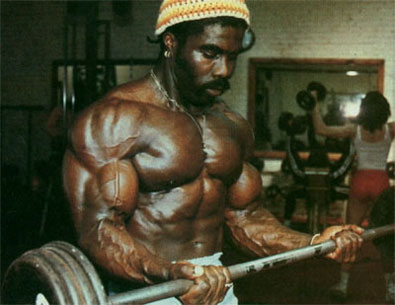 My suggestion is based on my experiences with the Tendo measurement device, which I've been using for over 10 years now. The Tendo unit allows convenient measurement of mean force output (measured in watts) on every rep you perform. Over the years, I developed a protocol where any given set is abandoned when mean power is diminished by 10 percent or more, compared to the athlete's current best efforts.

There are practicality issues involved with this concept of course: do you abandon a set when any given rep falls below 90 per cent of the first rep, or below 90 per cent of the best rep? Or, do you collect mean power statistics for an entire set (of say, 8 reps) and then use that as the absolute benchmark for other sets of 8 for the same exercise?

I've used, and still use, all of the above, and while I can't prescribe an exact procedure that always works across the board, I have become convinced with the idea that work should be (at least temporarily) discontinued whenever quality (defined as power output) diminishes significantly.

I certainly cannot "prove" that this theory is correct or even ideal. I do think however, that the principles behind the theory are credible. In fact, I consider this concept to be "intuitively obvious," meaning, it requires no proof, at least for me.

So I'll continue to scan the scientific journals for evidence that I'm right, but I won't be waiting for science to prove what I already know to be an effective practice: discontinuing the set when force output begins to deteriorate significantly.

"Despite the lack of evidence, neural fatigue exists and is a big factor in training." – Eric Cressey

Imagine you deadlift 500 pounds for the first time and it's a complete grinder. You call it a day and leave the gym right after the lift. The following day, you wake up and have absolutely no muscle soreness. Just for shits and giggles, you go in and decide to test your 1RM deadlift again – because we all know you could bench heavy EVERY DAY when you were a beginner, right?

There was no muscle soreness, and it's hard to believe that a single-rep would impose so much muscular damage that it would interefere with subsequent performance. It's neural fatigue, and there really isn't any way to quantify it other than by saying that there was a decrease in performance.

Great study to check out:

Basically, these researchers had subjects take 1RM attempts for 14 consecutive days. Obviously, performance dropped off. HOWEVER, none of the suppressed endocrine function seen with classic volume-related overtraining studies was present in the intensity-related overtraining group. Neural fatigue just isn't easy to quantify.

Next, imagine that the entire deadlift scenario above was repeated, but this time, between 1RM attempt #1 and attempt #2, you:

a) Broke up with your girlfriend.

b) Only managed three hours of sleep.

As you can see, there are a lot of factors affecting performance, and while we have blood markers of muscle damage, it's very tough to single out neural fatigue.

It's a travesty we don't have more science focusing on muscle growth in humans. I can't blame the National Institute of Health (NIH), though. After all, given the plethora of life-threatening diseases that can surface or invade our bodies, it's probably better that funds be directed toward more humane endeavors. But damn, I sure wish we had more than rats, cats, and cows to demonstrate what's possible in terms of human muscle growth.

But all's not lost. The fact that the vast majority of hypertrophy-focused studies employed four-legged creatures only makes us coaches think a wee bit harder with regard to faster ways to build muscle.

Indeed, people like me are blessed with many clients from all walks of life that have become my "lab rats." And let me tell ya, I think I'm stumbling onto something big – something that no NIH study has effectively tackled, or will tackle, in the near future.

What is this "something big," you ask? It's High Frequency Training (HFT). What I mean by HFT is a system where muscle groups are trained more than four times per week. If fatigue and volume are managed – and that's specific to each person – no method will build muscle faster.

It's been said that science is the act of observing the world around us. And if we follow this example we'll see that the world around us is slapping us in the face with many powerful muscle-building demonstrations. For those who train a muscle group with enough intensity and frequency, hypertrophy always occurs faster than traditional bodybuilding methods.

I've had clients fail to make substantial gains with 10x3, 5x5, triple drop sets, and virtually every other method you can name. But in my world, one thing's for certain: I've never failed to build a person's muscles faster than ever if he follows my HFT methods to the letter.

A simpleton is constrained to the general postulates that were devised by non-training scientists. Specifically, these scientists have attempted to qualify muscle breakdown, fatigue, and recovery by postulating that after a muscle group is trained, performance drops (fatigue sets in), and muscle growth only occurs after a period of recovery and subsequent supercompensation. But what happens if you re-train a muscle group before it's recovered?

What if you performed 1000 calf raises every day for the next month? At the end of the month, do you think your calves would be bigger or smaller? Listen, no scientist on earth would argue that the human body is an organism that adapts to the demand that's placed on it. This is known as Specific Adaptation to Imposed Demand – the SAID principle.

When you starve yourself, your metabolism slows. When you overfeed yourself, your metabolism increases. When you're dehydrated, you hold more water. When you're over-hydrated, your body releases water. When you practice Chopin on the piano, your nervous system builds neural connections that enhance finger control. If you don't practice piano, your nervous system doesn't build those neural connections because there's no reason to.

So when you train muscles frequently, your body must adapt to the imposed demand. What we currently know is that a muscle group becomes more neurologically efficient and grows bigger with training. These processes occur because the nervous system enhances those motor pathways, and new proteins are inserted into the muscles.

What I can't do is reference a human-based, hypertrophy-focused study that incorporates the type of training that I'm talking about. But what I can do is tell you to look at the delts of boxers, the thighs of speed skaters, and the lats of swimmers.

Sure, I can't prove that training with a high frequency results in the faster muscle growth because the NIH doesn't prioritize such information. But I can tell you to observe the world around you. After all, that's what science is all about.

"Fat loss is not a long-term program." – Dan John

Fat loss is an all out war. Give it 28 days, only 28 days. Attack it with all you have. It is NOT a lifestyle choice... it is a battle. Lose fat, and then get back into moderation. There's another one for you: moderation. Revelations says it best:

"You are lukewarm and I shall spit you out."

Moderation is for sissies.

Sure, half a pound of fat added a month will be six pounds a year and thirty in five. This is exactly what happened to me. Yes, I know "I know what to do to keep fat off," but it's really hard to notice 1/8th of a pound increase per week. So, over time, you simply buy a different pair of pants over five years, and the fat adds up.

Don't dare think you can change one thing and reverse five years. I used to think that was true, but it isn't. You lose fat by doing the Atkins Induction for two weeks, the V Diet for 28 Days... something radical, something unbalanced, something crazy.

Moderation does NOT work in the fat loss wars. A little this, a little that ain't gonna work and we know that from walking around the malls during Christmas.

Fat Loss is a short term war and it works. Focus all your resources: diet, supplements, training, on boiling the fat off. It will come off. I can't prove it, but I know I am right.

Few people can handle a long term fat loss program... we can prove that... research is deep on that "truth." The radical fat loss solution... embraced by millions intuitively with 14 day and 12 day and 21 day diets is RIGHT.

Boneheaded blatherings or inspired insights? You be the judge.

Most heavy lifters need better thoracic spine mobility. Here's one way to get it, while also stretching your lats and triceps.
Exercise Coaching, Mobility, Tips
Eric Cressey May 1

High reps and continuous tension can build a mountain of muscle, especially on your legs. Try this workout.
Tips, Training
T Nation March 13