Q: Christian, I really want to improve my biceps development. Do you think that supersets are a good training method to use for that purpose?

A: I really like supersets (which is performing two exercises, one after the other without any rest), especially when training smaller muscle groups like biceps, triceps, traps, and deltoids. While I tend to prefer heavier lifting for basic exercises such as bench presses, rowing, squats, and deadlifts, I feel that in some cases supersets can offer more in terms of muscular development than regular lifting.

Here are the benefits of supersets as I see them. You drastically enhance training density (the amount of work performed per unit of time) and this training variable plays a huge role when it comes to building muscle mass. To be more precise, there are three major factors involved in stimulating muscle growth:

A) Intramuscular tension, which is strongly correlated with the amount of weight lifted or intensity of the muscle contraction.

B) Time under tension, which is basically the amount of time that your muscles are intensely contracting during a set.

Check out this graphic illustrating the impact of those factors on hypertrophy stimulation:

Here's a brief explanation of all the factors involved:

External resistance: Represents the "mass" element of the force production equation. Generally speaking, the greater the external load, the more force one must produce.

Heavier loading increases CNS activation and can lead to an increase in Testosterone production. It can also improve the efficacy of the CNS to recruit muscle fibers. The more fibers you can recruit, the more growth you can stimulate.

Eccentric (negative) actions have a greater impact on muscle hypertrophy by increasing physical loading of the fast twitch fibers, especially if performed slowly or under control. Explosive concentric actions increase CNS activation, which could also lead to an increase in Testosterone production and in muscle fiber recruitment. The best way to execute an exercise is thus to lower (eccentric) the bar slowly and lift it (concentric) explosively.

Density: The amount of work performed per unit of time (higher reps and/or shorter rests). A higher density of work increases lactic acid production, which has been shown to lead to the release of hGH. Density is probably the most important factor involved in strength training as far as modulating hGH release goes.

TUT: Time Under Tension. A greater TUT can also increase lactic acid production provided that it doesn't go beyond 120-180 seconds per set.

Now, to get back to our supersets, this type of training might be the only one where it's possible to stimulate hypertrophy via all four factors at the same time. If you use mostly heavy lifting you can maximize the external resistance factor, but the TUT will be relatively low (you can't lift a near maximal load for a long period of time or for a lot of reps) and so will your training density (heavier lifting requires longer rest periods).

On the other hand, if you rely only on high rep training, you might very well have a long TUT and acceptable training density, but the external loading will be low. As you can see, with regular lifting it's almost impossible to maximize all factors. But with supersets it becomes possible.

For example, you can use two exercises for one muscle group (e.g. biceps), the first one is relatively heavy (4-6RM for advanced lifters, 6-8RM for intermediates) while the second one is lighter and can make use of some intensity techniques like a slower tempo or a peak contraction.

Since there's no rest between both exercises, the same muscle group is under tension for a relatively long period of time, and since you're taking very little rest, your training density is also fairly elevated. Such a set is thus tremendously effective at stimulating muscle growth.

Another benefit of supersets is that they can allow you to fully stimulate the whole muscle group. This is especially important for muscle groups divided into more than one portion. For example, we could say that the biceps has two portions: the long and short heads. But we can also add a third, which isn't part of the biceps per se, but is part of the arm flexor complex: the brachialis.

While all three of these muscle group parts will be active during any type of curling movement, the type and angle of curl can place more stress on one or two of these parts. With supersets you can thus utilize one exercise targeting each portion of a muscle group.

Since your original question was referring to biceps development, here are some factors involved in the targeting of specific portions of the arm flexors:

Since loaded movements (lifting weights) are what interest us, we'll look at the last two columns in the table above. As you can see, during rapid (1-2 second tempo) movement, the biceps itself is the prime mover when using a supinated grip. The brachialis becomes the most important muscle involved when curling with a hammer grip, and the brachioradialis (part of the forearm) is the most important muscle when curling with a pronation/reverse grip. During slow tempo movements, the brachialis takes more of the workload regardless of the type of grip used.

In the illustration above, you can see that grip width can also affect the amount of stimulation placed on various portions of the arm. For example, with a narrower grip the long head of the biceps (outer portion) receives more stress than the inner portion. The situation is reversed when using a wide grip.

When it comes to muscle recruitment, it's important to note that even more important than strict grip width is the difference in the width of the grip and that of the elbows. To target the outer portion of the biceps, the elbows should be much wider than the hands (narrow hands grip/wide elbows position). To target the inner portion we want the hands to be wider than the elbows (wide hands grip/narrow elbows position).

So our first type of biceps superset is the "complete targeting superset." It's composed of three exercises:

A good example of this type of superset is as follows:

* Note: On the way up, try to curl the weight while bringing the elbows even more inward.

* Note: On the way up, widen your elbows by pressing against your knees.

The second type of superset is a "shock" superset. It consists of utilizing two exercises targeting the same portion of the biceps.

That's it for this installment. Hopefully you learned a few things! See you next time with a few new neat tricks!

This loaded carry beats everything when it comes to metabolic conditioning and fat loss. Here's why, plus two ways to do it.
Metcon, Tips, Training
Christian Thibaudeau October 16 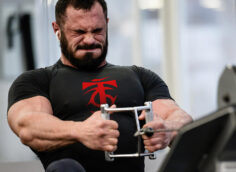 You need to balance your training if you want to build muscle or lose fat. Do this by evaluating your current metabolic state. Here's how.
Bodybuilding, Metabolic Conditioning, Metcon
Dr Jade Teta July 23

A long-time strength coach finally enters a powerlifting meet. Here's what you can learn from his experiments.
Powerlifting & Strength, Training
Charles Staley June 4