How many athletes do you know that train their necks directly?

No, we're not talking about stimulating the neck muscles through power cleans or heavy deadlifts, and we're certainly not referring to a few sets of half-assed shrugs thrown in at the end of a back or shoulder workout.

Proper, direct neck training is about as rare as perfect full squats at Planet Fitness, and it's not just the novices or weekend warriors that are missing the boat. Even very experienced trainers will skip neck training because they deem it scary, unnecessary, or just not worth the effort, and as such the neck goes unnoticed.

That is, until you suffer a neck injury.

Experienced or otherwise, trainees need to start paying the complex musculature of the neck the respect it deserves. The neck region consists of over a dozen intricate muscles feathered on top of each other, all working in symphony to ensure proper head movement and stabilization, as well as assist in activities involving shoulder movement and respiration.

Best of all, from an aesthetic perspective, a solid, strong neck provides the finishing touch to a powerful physique.

Truth is, if you aren't training your neck, you're missing out. This article will show you the safest, most effective way to go about doing it.

But first, a quick, hopefully not-too-boring anatomy refresher. If you don't give a damn about the anatomy of the neck, go ahead and skip to the section that begins, "Pencil Neck = Weak Neck," but do so with great shame over being such a lazy SOB, please.

The most commonly known and subsequently trained muscle among the neck region is the trapezius. The trapezius originates in the spinous processes of the external occipital protuberance and the ligamentum nuchae, and has three points of insertion: upper (lateral clavicle, acromion), middle (spine of scapula), and lower (root spine of scapula) each involving a separate, yet interrelated muscle action.

Movement of the upper trapezius involves elevation and upward rotation of the scapula, whereas scapular retraction and depression are the resulting actions of the middle and lower trapezius, respectively.

Primarily responsible for the lateral flexion of the cervical spine and secondarily serving as a muscle of respiration, the scalenes, similar to the trapezius, are composed of three aspects: anterior, medius, and posterior.(1)

The scalenus anterior originates from the anterior tubercles of the transverse process and inserts into the scalene tubercle on the inner border of the first rib, assisting in the elevation of the first rib during inspiration.

Lastly, the scalenus posterior, which originates from the posterior tubercles of the transverse processes of the lower cervical vertebra inserting into the outer surface of the first rib also assists with inspiration and lateral flexion of the cervical spine.

Its counterpart, the splenius cervicis, originates on the spinous process of the next three thoracic verterbra inserting into the posterior tubercles of the transverse process of the middle of the cervical spine. Individually, the muscles rotate the head and neck to the side of the contraction, whereas they work in conjunction to extend the head and neck.

The levator scapulae originates in the transverse processes of the cervical spine and inserts into the superior angle of the scapula towards the spine of the scapula. Its primary function is elevating the scapula when the neck is stabilized, and when the scapula is stable, it assists in neck rotation.

Both heads share an attachment on the mastoid process of the temporal bone of the cranium. Acting alone, the sternocleidomastoid rotates the head to the opposite side and tilts the head up. Together, the muscles flex the head and neck and pull them forward.

Note: As stated earlier, the trapezius, scaleni, and sternocleidomastoids are also respiratory muscles and in conjunction with their movement functions, are essential in both sport and everyday life.(1,3)

While we're all familiar with the term 'pencil-neck' and how it correlates with being weak and wimpy, we really don't care about the size of our necks...unless of course, its circumference is so great that it requires custom tailored shirts and/or exacerbates sleep apnea.(4)

An explanation some experienced bodybuilders will offer to justify avoiding direct training pertains to aesthetics, namely because they have larger waists or narrow clavicles and a sleeker neck makes their V taper appear more pronounced. However, that reasoning doesn't apply to competitive sports, specifically combat or contact sports.

Recent research showed that neck strength determines head deltaV (the speed change that the head is exposed to as a result of a impact) and head injury criterion, which makes neck training a worthy consideration in helping prevent concussions.(5)

Consider that American football has the highest incidence of head and neck injury at 40 per 1000 athletic exposures, equating to 0.41 concussions per NFL game.(6) Machine-based neck training has been shown to increase isometric cervical neck strength (7,8) and neck training has also been proven to improve the quality of life of women suffering chronic neck pain.(9)

Often used by wrestlers, mixed martial artists, and other combat athletes, neck bridging has stirred quite a controversy throughout the years. Athletes and coaches question its effectiveness and safety, speculating injury caused by the compressive forces placed upon the cervical spine during the hold.

If performed safely following thorough instruction and under subsequent supervision of a qualified coach or trainer, one can reap the benefits of the exercise.

However, neck bridging is not appropriate for some populations, including those who have a history of back and neck injuries. One must also take into account the fragility of the cervical spine. Under these circumstances, coaches and trainers should seek safer alternatives.

Here's a video of a Neck Bridge:

Now that you can identify the muscles of the neck, know their function, and have some scientific rationale, let's examine neck training from a practical perspective.

The Program By The Numbers

Let's get to it! The range of motion and stabilization training is to be done with your dynamic warm up before training, while strength work will be done at the end of a resistance training session starting with two days per week and progressing to four.

Mobility and Range of motion training:

Active-Isolated Stretching: all done for 6-10 reps with 2 second holds at the end of the range of motion (descriptions of these movements are included below in the "Exercise Explanations and Rationale" section).

Manual resistance progressing into Medball and finally into Swissball 2 x 10 seconds- working up to 3 x 20 seconds. When 20 seconds of stability is achieved, progress to the next level of the exercise (i.e. manual to Medball)

During the first two weeks of this program, you'll begin with just the range of motion and stabilization training, unless you've already been training your neck. Doing so allows the body to adapt to neck training without the added stress of weight resistance, thus preparing it for the strength aspect of the program.

Active-isolated stretching restores length to the muscles, activates them in the proper working order, and increases the range of motion in preparation for resistance.

Note: The weight you choose for neck extensions and neck flexion may be slightly more than what you use for the neck lateral flexion. Also, keep in mind that while the demonstrations featured in the videos above are examples of how to train the neck, there's more than one way to skin a cat.

Use Your Head to Train Your Neck

Neck training needs to be an integral part of your program, whether you're an athlete or not. It's important for reducing the risk of concussion, protecting your spine, and ensuring that you can hold your head up when everyone else is staring at the ground. Because in life, as in sports, you have to keep your head held high and you can't hit what you can't see.

A special thanks goes out to Wesley Showalter and Justin Assadinia of the Penn State Rugby team for demonstrating the exercises featured in the videos in this article.

Still trying to be the biggest dude in the gym? Once you've reached your muscular potential, your body will fight back. Here's what to do when it does.
Bodybuilding, Motivation, Training
Christian Thibaudeau January 3
How to Get "Ass to Grass" when Squatting
Training
Ian King July 11 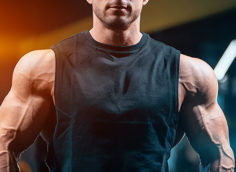 When your go-to shoulder exercises stop working, try these. Then get ready to buy some new T-shirts.
Training
Merrick Lincoln, DPT February 24

This six-week program breaks some of the currently accepted rules for workout volume and duration. That's why you'll do more than 20 sets per workout and you'll train for 60 to 75 minutes.
Arms, Training
Erick Minor October 21