I knew a guy in high school with a single goal in life: to build his back so wide that when he walked on the beach on a sunny afternoon, people would think they were in the middle of an unexpected solar eclipse.

This guy's shoulders were the size of cannonballs, and his biceps were so big he could barely scratch his head. Although I don't know if he ever achieved his goal (my ears still perk up at reports of solar eclipses), the image of having such a wide back and strong shoulders always stuck with me after that. When you've got that powerful V-shape, everybody notices.

The following program is designed to incorporate some vertical pushing and pulling movements to help increase your breadth so that you too may eventually serve as a human beach umbrella.

As much as I love horizontal pressing and pulling, it just can't compete with vertical plane movements when it comes to creating a V-shaped torso and powerful shoulders.

A word to the wise, though, about vertical pressing: some people can get away with it, and others can't. If your thoracic alignment sucks, or your AC joint screams with pain when you comb your hair, you should probably address that issue before getting involved with the military press.

For the rest of us, let's get down to business.

People spend so much time sitting in front of the computer these days, it's important to maintain thoracic mobility in order to safely perform any overhead movements. (Don't worry, we'll get to the juicy training after we do the mobility stuff.) With a hunched thoracic spine (thoracic kyphosis), complete flexion of your shoulder can be very difficult, if not impossible. If the shoulder is forced into an overhead position, an injury will almost certainly result.

To increase mobility, extensions on a foam roller are exactly what the doctor ordered. To perform this movement, place the foam roller at the base of your thoracic spine, and support your head with your hands. Keeping your butt on the floor, arch your upper back around the roller, then bring it back to the starting position.

Roll a small distance up your back, then repeat. It should take three or four rolls to reach the uppermost region of your back. Make sure to stay away from your lower back, and don't pull on your head with your hands.

If you don't have a foam roller, or can't fit it in your gym bag, you can perform a similar movement with a pair of tennis balls. It won't give you the exact same effect, but it does provide much-needed mobility to the upper spine.

Place one ball on either side of your thoracic spine, and lie back on the floor with your knees bent. Reach out with your hands to about 45 degrees (just enough to raise your shoulders off the ground) and hold briefly before returning to the floor.

Move up about half of one ball roll, and repeat at each spinal segment all the way up to the top of your thoracic spine. This not only improves mobility, but feels like an incredible deep tissue massage for the spinal erectors.

Michael Boyle explains the drill in detail in The Essential 8 Mobility Drills.

However, if you're going to do this drill make sure you steer clear of dollar store tennis balls as they'll inevitably flatten if you weigh more than 150 pounds.

All I'm going to say about mobility work is that you should know by now that it's important. The drills below are from Inside Out Warm Up by Mike Robertson and Bill Hartman. If you haven't already, pick up a copy. I wouldn't do an upper body workout without it.

When it comes to shoulder positioning, there's an invisible tug-of-war going on, which greatly affects our injury risk. According to Shirley Sahrmann, the levator scapulae and rhomboids are constantly trying to downwardly rotate the scapulae, while the lower traps, upper traps, and serratus anterior are battling back in an attempt to rotate them upwards.

Unfortunately, bad posture and poor exercise programming is helping most people's rhomboids and levator scapulae win the tug-of-war, leading to downwardly rotated scapulae. Suffice to say that this isn't the position you want your shoulders to be in when you're doing any kind of overhead work.

This drill activates your serratus and combats downward scapular rotation. To perform this movement, place your hands shoulder-width apart, allowing your shoulder blades to glide along your body until they come together in the back.

Be sure not to bend your elbows: the movement should come only from your scapulae. From the bottom position, concentrate on pushing the floor away and try to protract the shoulder blades forward by contracting the serratus anterior. Repeat for 10-12 repetitions.

Once you've got the serratus firing, you want to activate your trapezius muscles. The YTWLI movement is great for battling downward rotation. It also involves the levator and rhomboids to some extent, but I still find that it's great for targeting the lower and middle traps.

Lie face down on an incline bench and point both thumbs up towards the ceiling. From this position, you'll perform 8 repetitions of each of the following motions, with no rest in between.

Don't be surprised if you find this drill very difficult the first time you try it. Try it without weights first, before you think you're a superstar. This one just might crush your ego.

No vertical pulling program is complete without pull-ups. As tempting as it is to introduce something new and exciting, the old methods are often the best. Nothing beats pull-ups for lat development. Don't let anyone tell you otherwise.

If you can do more than 8 repetitions, you should add weight by using a dipping belt or Xvest. If you can't do 6 pull ups, you can practice doing band assisted pull-ups until your strength comes up.

The handstand push-up, like most closed-chain exercises, is awesome. I absolutely love the dumbbell version, for several reasons:

To perform this movement, place two large hex dumbbells on the floor slightly wider than shoulder width apart. Grab one dumbbell with each hand and assume a handstand position against a wall.

From here, come down until the top of your head almost reaches the floor, then push back to the top position. Doing this in socks rather than shoes makes it easier to slide up and down the wall.

I first read about this incredible exercise in Christian Thibaudeau's The Torso Solution a couple years ago. Unlike the conventional pullover that lets you almost fully rest at the top, this movement keeps the tension on the lats throughout a much larger range of motion.

Set up a bench on a decline, and use the rope attachment to perform a pullover motion while keeping your arms almost completely straight. Take your arms all the way back to full extension, but be sure to keep your abs tight, avoiding the tendency to arch your lower back off the bench at the bottom.

Lateral Raises in the Scapular Plane

The lateral raise is a simple and effective way to hit the lateral deltoids. It ain't fancy, but it works. The key to preventing injury, however, is to perform them in the scapular plane. Instead of lifting the dumbbells directly to the sides, make sure to bring them slightly forward, so that they come up in the same plane as your scapula.

Special instructions: on the final set, go straight into a dumbbell shoulder press to increase the volume of work being performed by the deltoids. Because they're primarily a slow twitch muscle group, a higher volume of work is often needed to stimulate hypertrophy.

I could say that the human flag is an incredible way to tax your lats, delts, and pretty much your whole body in an isometric contraction, which, by the way, allows you to generate more force than a concentric contraction.

But let's be honest: nobody really cares about that. The real reason to do the human flag is because it looks friggin' badass. End of story.

If you can pull this one off, you will really mess with people's minds at the gym. You'll even catch them trying to do it when they think you're not looking.

There's really no easy way to learn this movement. All I can tell you is to focus heavily on your lats and delts if you want to even get close. I've also found that the lateral core can be a limitation, so side plank variations are important. When you start trying the movement itself, you'll find it easiest to start with bent legs and progress to the straight leg variation as you get stronger.

If you're feeling really diesel you can go for the world record, which is currently 39 seconds and is held by Dominic Lacasse.

Give the program a shot for four to six weeks. Even if you don't break any records (or cause any eclipses), you'll be much stronger and a good deal wider. 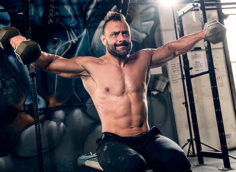 This exercise may not be doing much for your shoulders. Here's what will.
Bodybuilding, Shoulders, Tips, Training
Tom MacCormick August 24

Squat stalled out? Stop pussyfooting around with it. Here's what to do to restart your size and strength gains.
Powerlifting & Strength, Squat, Training
Derek Binford July 21