For some people, building a full, round chest is as simple as doing a few sets of barbell bench press. For those of us who have the pectoral genetics of a mere mortal, it takes a bit more of a precise, methodical approach to build pecs that resemble slabs of striated beef from top to bottom.

Assuming you're not one of the aforementioned genetic freaks (a.k.a. lucky bastards), then this article is for you! You're going to learn some scientific principles, tips, and tricks that, along with some hard work, will serve as your genetic equalizer.

I'm a meathead just like you. So from one meathead to another let's go over the chest muscles themselves and what they do. Then you'll be able to make intelligent choices when it comes to exercise selection and execution.

Because of its position up near the clavicle (collarbone), the clavicular head of the pec major is often simply referred to as the "upper chest."

Although many anatomists refer to the sternal portion of the pectoralis major as the "lower chest," for advanced physique-enhancement purposes we need to further divide this into two regions – the middle chest and lower chest.

When the entire pectoralis major works together, it produces a movement called horizontal adduction. In other words, it brings your arm across the front of your body, as occurs when doing a flye movement.

A lesser-known function of the pecs is to internally (or medially) rotate the humerus. Hold your arms out straight with your palms up, then rotate your arms such that your palms are facing down. That's one example of internal rotation of the humerus.

Now let's look at the actions of the upper, middle, and lower pectorals when they work in (relative) isolation as this is where things get tricky.

The lower portion of the sternal pectoralis is situated such that it helps to extend the shoulder joint – the opposite of shoulder flexion.

Since we've covered the upper and lower chest, let's look at the portion that we'll call the "middle chest." Since the muscle fibers of the middle chest run horizontally, they don't contribute significantly to shoulder flexion or extension. Instead, they simply horizontally adduct the humerus.

Here's a nifty little chart that summarizes the anatomy and biomechanics of the 3 regions of the chest:

"All or None" Confusion

You may have heard of the "all or none" principle of muscle contraction. Essentially, here's what it means: When stimulated, a muscle fiber will either contract or it won't.

This is some seriously misguided logic to say the least.

For starters, although still considered part of the pectoralis major, the clavicular pectoralis is actually a separate muscle with a separate nerve innervation.

Although the entire sternal head of the pectoralis major does share a common nerve innervation, the angle of the muscle fibers varies tremendously from top to bottom. For that reason, the line of pull is different throughout different areas of the muscle.

Luckily for us, your body (or brain rather) will recruit or call upon the portion of the muscle that's best suited to perform the movement in question. So if you were to do a movement in which the lower fibers of the pectoralis major are in the best mechanical advantage to execute the movement, then those will be the primary fibers recruited to do the work –thank goodness!

So yes, you can emphasize different sections of the chest from top to bottom. But notice I said emphasize, not isolate!

Before you can build a bad-ass chest, you have to know the visual strengths and weaknesses of your pecs.

There are basically four variations of chest development:

For the record, variation number four certainly appears to be the most common. However, many people mistake fat in the lower chest region as being great lower pec development. So, if you really want to assess your development precisely, get striations in your chest first, then assess!

Once you've identified your type of chest development, then you can intelligently plan your chest training accordingly.

Training for a Full, Round Chest

More times than not, I'd recommend performing three exercises for chest as part of a body part split in which you train chest every five to seven days. When training more frequently and/or utilizing high-intensity techniques, doing less exercises may be warranted. Likewise, in certain instances doing four chest exercises is a good call.

When selecting your exercises, make sure to take into account the desired outcome of your training. In other words, if your upper chest is weak (and I bet it is), then why in the world would you do two exercises that emphasize the middle chest and one that emphasizes the lower chest? This would only perpetuate the muscular imbalance that you already have!

Instead, consider doing two exercises that emphasize the upper chest and one that emphasizes the middle and/or lower chest. This will help to even out your chest development sooner rather than later.

Another good rule of thumb is to target the weakest portion of your chest with your first exercise, when you're at your strongest.

Chest Routine for Individuals with Even Development

This routine starts off with decline dumbbell presses which target the lower chest but also stimulate the middle chest very well.

The shallow incline dumbbell press is a great way to target the upper pectoralis while making it easier to keep the anterior deltoid out of the movement. To accomplish this, set the angle of incline between 15 and 20°.

Flat dumbbell flyes hit the chest right square in the middle. And contrary to popular belief, flyes can definitely be a mass-building movement. Just make sure to let your elbows bend naturally (about 30 to 45°) at the bottom of the movement. Doing so enables you to reduce the stress on the anterior shoulder and use dumbbells of respectable weight.

Chest Routine for Individuals with Poor Upper and Lower Development

Decline dumbbell presses are a good addition to practically any chest training routine. They've been shown to activate more motor units (muscle fibers) in the pectoralis major than any other chest exercise around.

The incline barbell press is a great exercise for the upper chest... if you do it properly. Make sure to keep your chest lifted "up" throughout the movement. This helps to keep the stress on the upper chest as opposed to the anterior deltoids.

Dips hit the chest, anterior deltoids, and triceps – there's no way around that. However, by using a grip that's slightly wider than shoulder width and tucking your chin to your chest/leaning forward, you can shift some of the stress from your triceps to your chest.

Chest Routine for Individuals with Poor Upper and Middle Development

Years ago I had a conversation with IFBB pro-bodybuilder, Johnnie Jackson, that enlightened me regarding how well floor presses stimulate the upper chest. Allow me to explain.

At least one study has shown that using a slightly narrower grip improves upper chest activation even more so than an incline bench angle. This is because using a slightly narrower grip forces the elbows to come slightly in toward the sides (adduction of the humerus) as opposed to them being flared. Subsequently, this puts the clavicular pectoralis in a better mechanical advantage to do its primary function(s): flexion and horizontal adduction.

Do the floor press with a grip width that's just outside of shoulder width and that places your upper arms about 30° away from your sides in the starting position. Then push the barbell up and back in a slight arc such that it ends up over your upper chest.

On the shallow incline dumbbell flyes, set the angle of the bench to between 15 and 20°. One way to accomplish this is to put two or three Olympic plates under the "head" end of the bench.

Recalling that the most natural function of the upper chest is flexion and horizontal adduction, use the same grip width mentioned in the floor presses above, just slightly wider than shoulder width.

Low to high cable flyes perfectly mimic the line of pull (and action) of the clavicular pectoralis. It's one of the best exercises around for "filling in" the upper chest up near the collarbone.

To do the movement, start with two pulleys set in the bottom position and have your palms facing forward. Your upper arms (humerus) should be at about a 30° angle away from your sides.

Using your upper chest to pull your arms up and in, raise the handles up and together so that they come together at shoulder level or slightly higher. The path of the cables will draw an upside down V.

When it comes to training (and life in general for that matter), many people erroneously think that all you have to do to succeed is work hard. Unfortunately, this isn't true. You have to work intelligently.

Your body is simply a dynamic, ever-changing organism that adapts to the stimulation and stress you place upon it. That's why it's important to purposefully select the right exercises that will stimulate your body in such a way as to visually enhance the appearance of your physique.

No longer will you think of chest training as a haphazard collection of press and flye movements. Instead, each and every chest workout is an opportunity to build bigger, more balanced pecs that are full and round from top to bottom!

These brand new exercises will hit your lats, strengthen your shoulder girdle, and give you a great set of abs.
Abs, Back, Shoulders, Training
Max Shank August 14 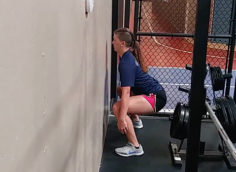 Most people do hip thrusts for glute strength, but they can also be used as a high-rep finisher. Bonus: It's a quick setup with a dumbbell.
Exercise Coaching, Glutes, Tips
Jesse Irizarry June 14 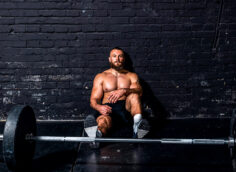 Weight training is all about hard work, but overdoing lifting volume will slow or even stop your gains. Here's why and what to do instead.
Bodybuilding, Powerlifting & Strength
Christian Thibaudeau June 13