Back isn't for pretty-boys. The typical overly-tanned commercial gym prima donna rarely has a back worthy of a second glance, which isn't surprising considering it's not on the list of bar-star approved body parts.

The back is the blue collar muscle group. You can't watch it get all pumped and swole while you train it, and the workouts are usually basic, brutally heavy, and exhausting. So when a new lifter shows up at the gym with yoked traps, wide lats, and 3D rhomboids, you have to respect them a little.

For bodybuilders, there's no such thing as having a back that's too big. Legs can over shadow the upper body, arms can grow disproportionate to the shoulders or chest, but no judge will ever deduct points for having too much back.

At the highest levels, back is the muscle group that separates the best from the rest, so the bigger and freakier, the better. Haney, Yates, and Ronnie are among the greatest bodybuilders ever to set foot on stage and it's no coincidence that they also possess three of the best backs in bodybuilding history.

Powerlifters and strongman competitors must also have tremendously strong backs. The back is the prime mover in the deadlift, which in a powerlifting competition is performed last and often decides the winner. You can't "gear" a deadlift (use special powerlifting equipment) and the only way to get a bigger one is to earn it through pulling heavy iron.

A strong back is also vital to having a big squat and bench. You can't move huge weights in the squat without the back strength to support it, while in the bench strong lats are critical to being able to lower big weights in the proper groove and driving the bar off the chest. Ed Coan, the greatest powerlifter of all time, has said that the two most important muscle groups for powerlifting are the glutes and the back. Do you need a better endorsement?

Even if stepping on a bodybuilding stage or powerlifting platform isn't in your plans, a big, strong back is still worth working for. For athletes, any sport that involves pulling, climbing, or physical contact will undoubtedly benefit from building a stronger back.

Finally, in the real world, a big strong back is highly functional. Anytime you pick up something heavy, the back is doing the majority of the work, so when you lift a heavy box at work, it's your back strength that will determine your success.

Deadlifting is the base upon which back strength is built. Deadlifts stress every major muscle group in the posterior chain, from the base of the erectors to the top of the traps. Ronnie Coleman and Johnnie Jackson possess two of the thickest and most powerful looking backs to ever grace a bodybuilding stage, and both men are capable of deadlifting over 800 pounds.

Training the deadlift is surprisingly simple. Hit it hard and heavy and then let your body rest and grow. Deadlifting rep schemes are generally lower than most other compound movements. Sets of 5-10 reps work best for bodybuilding purposes, and for pure strength it's common to work up to heavy triples, doubles, even singles on a regular basis.

Deadlifts have no need for fancy techniques like drop sets, super sets, or rest-pause sets. While it isn't a highly complex movement, it's an incredibly taxing one, and you have to be mindful not to over do it. This is especially true if you're also squatting heavy and performing heavy rowing movements.

One effective system involves working in short three-week waves, followed by a down or deload week. Essentially, the weights are increased each week for three weeks with a corresponding decrease in the rep range, and then trained lightly or not at all the fourth week. I've had considerable success with this methodology.

As you get stronger, volume and training frequency will usually need to be decreased to keep overtraining at bay. For those able to deadlift more than 700 pounds, deadlifting every other week works well.

The lower back should still be trained hard during in-between weeks but with different exercises, such as good mornings, weighted back raises, and pull-throughs. This allows the lifter to train consistently heavy, facilitating significant strength gains, but also mitigates the likelihood of overtraining.

There is no better exercise for back width than good old fashioned chin-ups.

Note: When I refer to chins, it's the variation performed with either an overhand grip (pronated) or palms facing one another (neutral) grip.

Chins are to back width as squats are to leg size. Lat pulldowns can be also used to add back size, but just like the leg press plays second fiddle to the squat, so do pulldowns to old school chins.

Chins are most effective using a relatively high set and rep scheme. One of my favorites is to perform sets to failure using only bodyweight until I hit 100 reps. This usually takes me 4-5 sets, ranging from 25-30 rep sets at the start to 15 or so by the last set.

I make a point of rotating my grip every set to hit the different areas of the upper back for complete back development. I begin with a very wide grip, move to a shoulder width/neutral grip for the second set, and then use a close grip on the third set. I return to the wide grip for the next set and continue the rotation until all reps are completed.

While all variations of chins work the lats, wide grip chins preferentially target the outer lats and teres major, while the medium, close, and underhand grips shift the emphasis to the lower and inner lats. I also perform a very wide grip variation, which I refer to as "ultra wide grip chins," where I take a neutral grip on a special bar that's wider than most wide grip bars. This hits the outer back especially hard.

One other key point is to focus on using the lats and to work through a full stretch of the muscle at the bottom of the movement and a full contraction at the top. Don't concern yourself with whether your chin actually clears the bar; the last few inches of the movement involve mostly the biceps and not the upper back.

Many will have a hard time performing even a few decent reps due to excess body fat or low strength levels. Fortunately, many commercial gyms have chinning machines with counter weights that assist in the chin movement until you can perform bodyweight chins proficiently.

Another effective solution is to use a Jump Stretch band, made popular by Louie Simmons of Westside Barbell fame. Simply loop the band around the center of the chin bar, pull one end through the opening of the other end and cinch it up tight. Then step into the bottom loop with both feet and the band will provide the necessary assistance. Experiment with different strength bands until you can perform chins on your own. 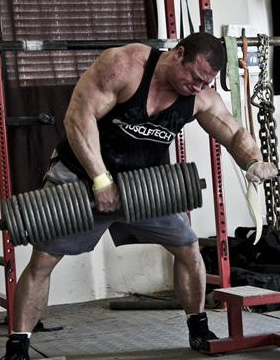 There are several effective rowing variations and your specific leverages will determine which works best for you. However, rotating between all the movements often yields the best results. The most useful variations for building thick slabs of upper back muscle are the standard barbell row, T-bar rows (done old-school style with a barbell and V-handle), and heavy dumbbell rows. These exercises should all be performed with a moderate to high volume and rep range and with as heavy weight as possible. The upper back is a large, complex body part and needs to be hit heavy and hard, and from multiple angles.

Of course, any back article I write wouldn't be complete without mentioning what Jim Wendler has dubbed the "Kroc row." The Kroc row is nothing more than a very high rep dumbbell row performed with a ridiculously heavy dumbbell. Done correctly, Kroc rows should leave you gasping for air like a drop set of heavy squats while building upper back size and strength like nothing else.

Kroc rows build strength that transfers well to improving the deadlift lockout, and when performed without straps will build a vice-like grip. Emphasis should be placed on the weight and the number of reps achieved. My personal records are 175 lbs. x 40 reps, 205 lbs. x 30 reps (both without straps), and 300 lbs. x 13 reps (with straps). Kroc rows can be performed with one hand and one knee on a flat bench, or while standing bent at the waist with one hand braced against a dumbbell rack.

Focus on getting a good stretch at the bottom by lowering the shoulder until the lats are fully extended, and pulling the dumbbell up in a straight line until it lightly brushes the upper abs/lower chest area.

Do NOT try to keep your elbow tucked and pull the dumbbell to your belt line, the form preached by every pencil necked personal trainer and keyboard warrior. Due to the leverages involved, this overly strict technique severely limits the amount of weight that can be used and is ineffective for all but the newest of trainees.

Think of this overly-strict form as the lat training equivalent of a triceps kickback whereas Kroc rows are heavy close grip bench press. One will add slabs of muscle and build freakish strength while the other only looks good if wearing a pink leotard.

A thick, wide back looks freaky on stage and means serious business wherever life takes you. A thick chest and massive quads might look impressive, but nothing transfers from the gym to the real-world like a powerful set of lats, traps, and erectors.

It's a statement of strength and power that commands respect. 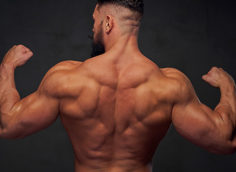 You don't need a fancy machine to build a big back. These simple variations will maximize size and strength.
Training
Tanner Shuck March 7

Personalize high volume training for your body type and get maximum gains in size and strength. Get the details here.
Bodybuilding, Training
Mike Mahler January 11 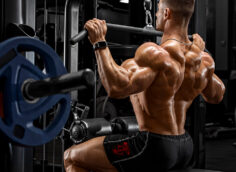 Are you struggling to feel the muscles of your back working? Can't get a pump back there or a hard contraction? Here's what to do.
Back, Bodybuilding
Gareth Sapstead October 24