Complain all you want about big arms being overrated or not important, but when the average Joe decides to hire a trainer, big, muscular arms often carry more credibility than the collection of letters behind a trainer's name.

Instead of trying to be a voice of reason in an age of arm-training hysteria, I freely admit that I've become an arm geek. I love big arms.

Don't get me wrong, I don't judge an athlete or a lifter strictly by how impressive they look in a tank top, but I do appreciate big guns when I see them. And more importantly, I've spent many an hour trying to increase the size and strength of my own arms and have learned a few things that my fellow arm geeks might find useful.

The Long and the Short of It

I'm sure most of you know your arm muscles – and if you don't, you should – but it never hurts to repeat basic anatomy. There are three main muscles that make up the front of your upper arm: the biceps brachii, the brachialis, and the brachioradialis.

The Importance of the Long Head

The primary goal of this article is to help target the long head of the biceps.

You might be thinking, "Who cares about the long head of the biceps? I'm not a competitive bodybuilder." Well, whether you're a pecs & arms vanity lifter or a functional zealot, you should care.

The long head of the biceps is thought to contribute to shoulder stability. Remember, the shoulder is the most flexible joint in the body and it's held together primarily by musculature.

The long head is also the most commonly injured head of the biceps, and most of the injuries occur at or near its origin. If this muscle gets injured, it can lead to decreased shoulder stability, followed by pain or discomfort during shoulder presses or bench presses. Ultimately, it can ruin your ability to press anything heavy.

The long head is the primary part of the biceps that produces supination. If this area is injured or worse, detached, it will be difficult to perform supination with any sort of load.

Finally, it's the long head that makes up that famous biceps peak, which when developed makes the arm appear to be very muscular. If you want to inspire a few jaws to drop when you hit a biceps pose, you'll need to have an impressive long head to do the job.

Also, ladies – most females prefer to develop a noticeable bump without getting a big, "thick" arm, so for you, focusing on the long head is also the way to go.

So what's the best exercise to hit the long head of the biceps? In a perfect world, my answer would be the straight barbell biceps curl because it forces the hands to be fully supinated throughout the range of motion and it uses a high load, thereby placing significant stress on the long head.

But something can be good for the muscles and bad for the joints, and I believe the barbell biceps curl should be contraindicated (avoided because it carries a reasonably high risk, even when performed correctly) for the vast majority of lifters as it places much undue stress on the wrists. 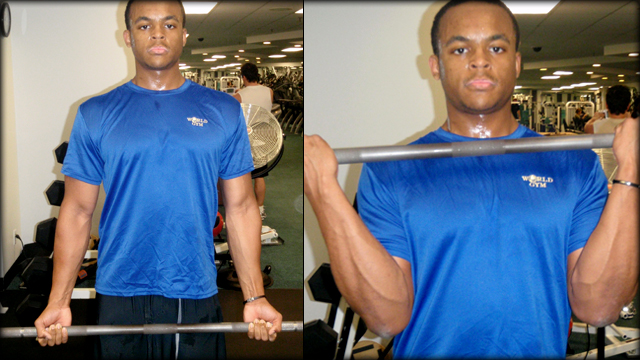 Everything is fine when just holding the bar, but as you curl up, particularly at the end of the range of motion, the hands end up wider than the elbows because of their fixed position on the bar. This puts much stress on the wrist and can lead to wrist problems, especially with heavier loads.

It might seem cool to slap some 45 lb. plates on the straight bar and knock out a set of curls for 10 reps, but the truth is the risk of doing that regularly doesn't outweigh the reward. 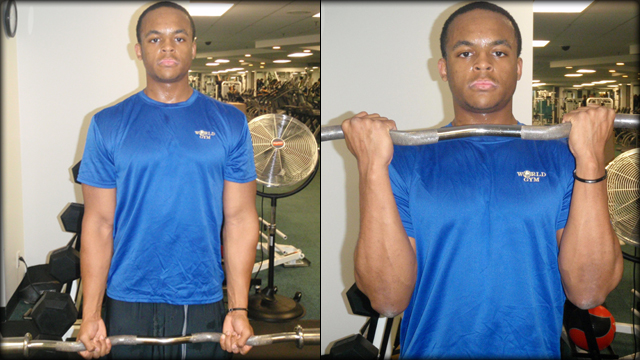 What can we do? The EZ curl bar is a quick and easy fix, but the problem with that is there's less muscle building stress placed on the long head of the biceps because the hand is now slightly pronated.

Instead, we need to get creative. I've found the following exercises to be the best at stimulating the long head while minimizing wrist strain: 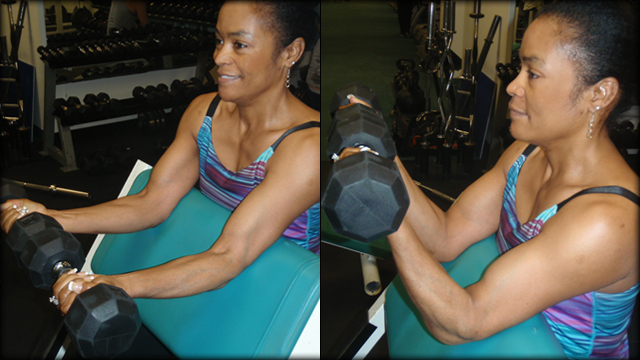 Hold a dumbbell in each hand and position yourself on a preacher curl bench as you would when using a barbell. Put the dumbbells side by side on the pad, mimicking the position of the bar and perform your curls. 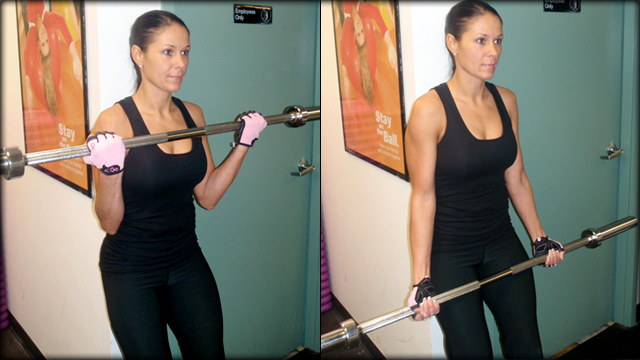 A strict curl is performed standing up against the wall using a straight barbell. Again, a shortened ROM makes this exercise more joint-friendly.

Note: Strict curls are vastly harder than normal curls – subtract about 20% of the weight you normally use.

Perform a dumbbell curl with the hand supinated (palms-up) throughout the ROM. This can be a bit annoying with heavy weights but give it a try. If you do choose to "twist" the dumbbell, make sure to do so by the halfway point and maintain the palms up position on the negative portion as well. See the video below for both the incorrect and the correct version of a Dumbbell curl designed to hit the long head of the biceps. 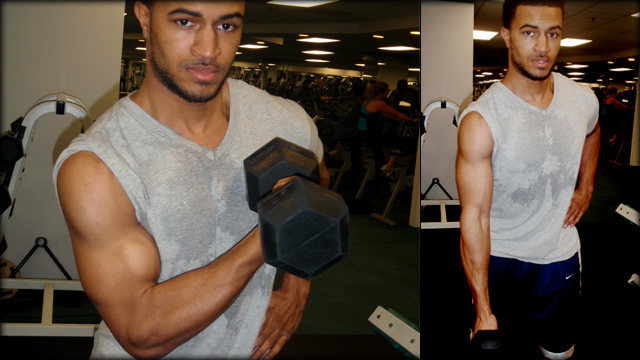 Keep the palm up but curl the dumbbell across the body so the inside of the dumbbell hits the opposite front delt. Fight to achieve a good ROM and don't stop short. Rather than focusing on load, try to squeeze the muscle throughout the ROM.

A narrower grip on the bar places a greater emphasis on the long head of the biceps. The reverse is also true: a wider grip places more emphasis on the short head. An easy, albeit amateurish rule of thumb regarding curls is whatever part of the biceps you can see working in the mirror (inside portion or outside), that's the part targeted by the exercise. The narrow grip is a bit harder on the wrists and most lifters can't go quite as heavy, but it does a good job of hitting the long head.

Many lifters are starting to realize that using a barbell for biceps curls is hard on the wrists (and if performed in the squat rack, significantly increases the odds of blunt force trauma from someone's angry fists), but one of the biggest problems is that not all EZ curl bars are created equal.

Further, incline curls can be hard on the shoulder joint, particularly if you have existing shoulder problems, so I wouldn't make this exercise a mainstay in your pursuit of a mighty long head.

The Geek to Peaks Program

As I said in the beginning, I'm a biceps guy. I think the biceps are studly, the ladies like them, and hell, I'd even say they're a very functional muscle.

When I was in high school and college I always had decent arms, not huge by any means, but there was a noticeable "knot" when I flexed my biceps. But sometime after college, I started to lose that knot. My arm was bigger, it was stronger, but it was just kind of thick, without as much of a bump when I flexed.

Being an uber meathead that cares about stuff like the peak of his arm, this bothered me, and so I spent some time trying to rebuild that long head that I used to have. After following workouts very similar to the ones below, my beloved knot is back!

Again, my arms may not resemble Robby Robinson's, and I'm definitely not perfectly satisfied with my curling strength, but these programs have helped me make progress. 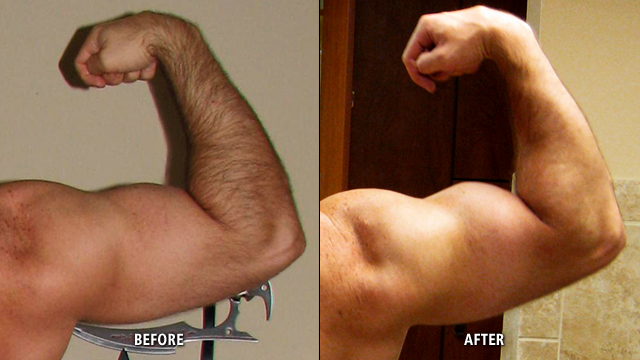 You have two programs to choose from. The first is a once a week plan, the second is a twice a week plan. Both work; choose the one that fits the best into your current routine.

A. Double Dumbbell Preacher Curl
2 warm-ups sets
3 x 8 reps (use a 6-second negative on all reps).

Focus on keeping the dumbbells supinated as much as possible.

Do the workout above once a week and add in the following
routine three to four days later:

Focus on the squeeze. Do all reps for one arm, then switch to the other side, rest, and then repeat.

Please don't be one of those closeted meatheads who publicly ridicules those who aspire to build big arms while secretly dreaming of sporting an impressive set of biceps of your own.

Embrace the biceps. Do your curls and start selling those tickets...to the gun show, of course!

This ab exercise will make you feel like you just got a fist in your breadbasket, but it'll really build your abs.
Abs, Tips, Training
TC Luoma December 31 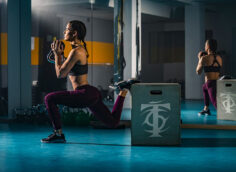 Wouldn't you rather be lifting instead of stretching and doing mobility exercises? You can be. Here's how to get functionally flexible, fast.
Exercise Coaching, It Hurts Fix It, Mobility
TJ Kuster March 6