Despite my focus on performance, I also want to look muscular and lean. So do my clients.

I had the opportunity to work with a lot of great bodybuilders, amateurs and pros. I worked with Amit Sapir for a few years, starting when he was an amateur and up to when he won his pro card.

I've trained Patrick Bernard, an IFBB pro in the 212-pound class, as well as a young figure competitor who won her class.

You can learn from anyone who trains hard – bodybuilders, powerlifters, athletes, CrossFitters, Olympic lifters, etc. Close your mind to any training modality and you'll miss out on a lot.

That said, here are three things I learned from working with bodybuilders. Including conventional rules that need to be broken.

Form is important. Good technique equals better performance. When you're competing in lifting sports like Olympic lifting, powerlifting, strongman, and CrossFit, a rep doesn't count if it's not complete or done within the rules.

I've always had a hard time accepting half squats, benches that weren't locked out, touch-and-go deadlifts, squats that are just a tad too high, and the like. But I've changed my tune.

Partial or "incomplete reps" can be very effective. Here's why:

Partial reps are fairly common, if not the norm, in bodybuilding. It was a shock for me at first, but after analyzing it I realized that for a bodybuilder, the purpose of doing a lifting exercise is simply to put tension on a muscle to make it grow.

It doesn't really matter what the exercise looks like as long as it puts the muscle under an optimal load/tension. Empirically, they found that doing only a portion of the range of motion for certain movements is what worked best for their own goals.

Bodybuilders tend to use relatively higher reps while still relying on pretty heavy weights. That's something that can take its toll on the joints, and reducing the range of motion can give the joints a break.

I'm not saying to start avoiding full range of motion on every set of every lift. After all, going full range on big movements often involves a greater amount of muscle mass and reaching a stretched position increases growth stimulation by activating the mTor pathway.

But when you're focusing on constant tension training – as opposed to heavy/strength lifting – it's perfectly okay to train in the range of motion that keeps the target muscle loaded.

Here are some examples of how to incorporate partial range of motion training:

I wouldn't use partial-movement training exclusively. It's more of an assistance technique. I certainly wouldn't use it when going heavy for low reps as it defeats the purpose of the exercise.

This is best kept for when using moderate-to-high reps (8-20). If you decide to use this technique, incorporate at least one full-range compound exercise with each muscle group. Train mostly using full range of motion, but know the value of partial range of motion and don't be afraid to use it if it fits your goals.

Lifters often make fun of isolation exercises. I did too. Yet I was the one praising the importance of having a good mind-muscle connection.

It might not seem like a contradiction... until you realize that the best way to fix a lousy mind-muscle connection is by isolating the muscle.

Learning to feel a muscle will make it easier to stimulate and grow. Isolation gives you the ability to feel individual muscles working.

Isolation work can even be used as a tool to improve your recruitment of a muscle, so that you can better stimulate it with compound movements.

If you can't feel a muscle working in a movement, you can't stimulate it optimally. The more you feel a muscle doing work, the better your recruitment of that muscle is and the more it will grow. Period.

Most of the time, just "thinking" about a muscle while doing an exercise, or trying harder to feel it working, isn't going to make a difference. If you don't feel the pecs being loaded during a bench press, you won't feel them better simply by thinking about them.

That's where isolation work can help you. By learning to isolate and flex a muscle, creating maximum tension with that muscle, you'll gradually improve your capacity to recruit it. The better you are at recruiting it, the easier you can integrate it when doing the big lifts.

A few years back, after I'd just transitioned from Olympic weightlifting to regular strength lifting/bodybuilding, my delts were so dominant I couldn't make my pecs grow no matter what. I could bench press in the 400's but had a flat chest.

So to "reprogram" my chest recruitment I did more isolation work and pre-fatigue training. It wasn't long until I could feel my chest during any variation of the bench press. My chest caught up to my shoulders and at one point I had to use the same strategy for my delts because my chest had begun taking over!

Sure, it sounds better to preach doing the big basics rather than isolation work. Squat, bench, deadlift, push press, power clean... all of those make you sound hardcore.

But the truth is that any resistance exercise can build muscle mass; isolation exercises just do it on a smaller scale because they don't involve as many different muscles. But, if you train all of them hard, they work too.

Still, the biggest benefit of isolation work is to increase your capacity to recruit a lagging muscle, and by increasing that capacity you also improve your chances of optimally stimulating that muscle during the big basic lifts.

Isolation work is motor learning – learning to maximally recruit and contract a muscle. While the bulk of your training program should revolve around the big basic lifts, isolation might be necessary to solve a problem with lagging muscle groups.

In that case, isolation work by itself or as a pre-fatigue superset (doing the isolation exercise before the compound movement) can help solve the issue by increasing your capacity to recruit a muscle and integrate it optimally in a big compound lift.

I love low reps. If I were to train only based on what I enjoy doing I'd never go above 3 reps per set, with the bulk of my work being done for singles or doubles. And I actually did that for a pretty long time.

Strength athletes, by being so focused on simply lifting bigger and bigger weights, are actually robbing themselves of some potential gains. After all, while it's true that the nervous system is key when it comes to showcasing strength, it's still the muscles that are lifting the weight.

All things being equal, the more muscle you have, the stronger you'll be.

Bodybuilders have long understood that provided you work hard, you can grow muscle with pretty much any kind of rep range. If you train consistently and try to gradually become stronger in the rep range(s) you're doing, you'll grow muscle regardless of if you are doing 3 or 20 reps.

When I also included slightly higher reps (5-10), I gained more muscle, faster. Now that I want to gain some muscle back after some medical problems, I'm including some higher rep work (up to 10 reps), even on the big movements, and I'm noticing a difference in growth.

And when only lifting heavy once a week, I still get stronger even though I'm doing less "pure strength" work.

* Day 4 of each week is a "test" day where you go for a heavy set to ensure that you keep the feeling of using near-maximal weights. For instance, work up to a 3RM of front squats (leg), bench presses (push) and deadlift (pull) in 5-6 sets.

Bodybuilders will use even broader rep ranges, but this represents a great compromise for goals that are both performance and aesthetic based. It will help you get stronger while also building more muscle.

To get strong, listen to a strong guy’s advice. Here’s what you can learn from Dave Tate’s early experiences under the bar.
Motivation, Powerlifting & Strength, Training
Dave Tate January 20 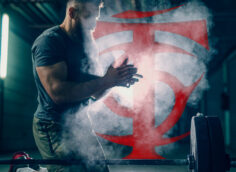 Whether you're a first responder or just a citizen caught in a bad situation, it pays to be conditioned. This workout will get you there.
Metabolic Conditioning, Metcon
Pete Loeschner November 16

The shoulders make the physique, they say. Here’s how to finally get yours bigger and stronger.
Shoulders, Training
John Meadows December 22 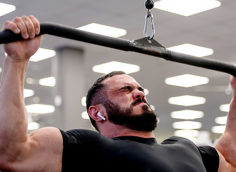 Here's how to do them to actually build your lats instead of your biceps.
Training
Michael Shaughnessy January 7