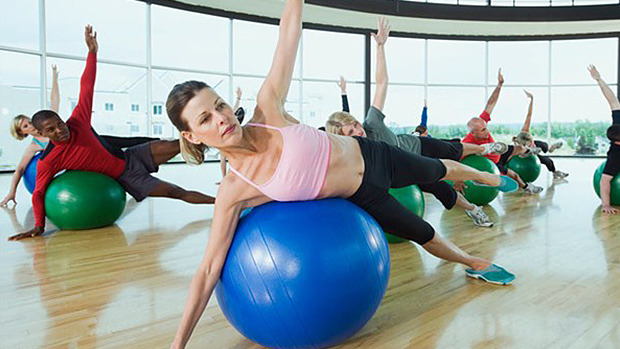 In the late-1990s, unstable surface training (UST) exploded in mainstream popularity and exercise balls (a.k.a. Swiss balls), BOSU balls, and small inflated discs were littered across every gym's floor.

Over the years, these tools earned a certain level of notoriety. Hardcore powerlifters and bodybuilders often trashed this style of training and avoided training on exercise balls because it didn't get you bigger or stronger.

Meanwhile, many personal trainers went all-in and began using these new toys exclusively, having beginners and deconditioned folks doing nothing but core-intensive Swiss ball-based workouts. They ended up giving the term "functional training" a bad rap.

For my Master's thesis I spent two years designing a study, programming and training our subjects, and collecting and analyzing data. We were the first researchers in history to look at the effects of 10 weeks of unstable surface training on performance in healthy, trained athletes.

The end result was a publication in the August 2007 Journal of Strength and Conditioning Research, titled "The effects of ten weeks of lower body unstable surface training on markers of athletic performance."

Here's what we learned. 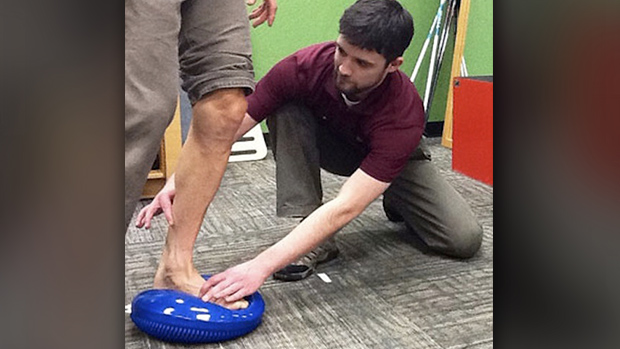 Following an ankle sprain, many patients develop functional ankle instability. Basically, the peroneals (muscles on the outside of the lower leg) fire slower, leaving you with less protection against re-sprains.

Fortunately, research had already demonstrated that this deficit could be addressed by adding UST, which can improve sensory function, meaning that the central nervous system received better feedback to improve the motor signals it sent out.

With the success therapists saw using UST for functional ankle instability, they eventually began applying it to other populations. Most of the studies at the time were poorly designed, either not accounting for previous history of injury, not having a simple control group, or simply by being too short in duration.

There were some favorable outcomes, but there were also some huge red flags and conflicting reports.

The Studies, For Better and Worse 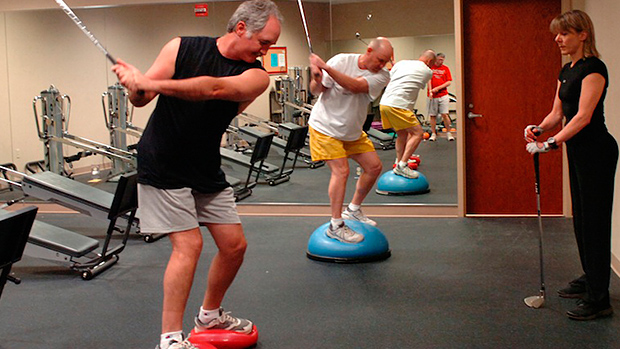 A 2004 study found that balance board training did reduce the rate of ankle sprains in volleyball players, but this reduction was limited to players with a previous history of ankle sprains while healthy athletes saw no preventative benefit.

The same study also found that overuse knee injuries increased in some players when using UST.

Another study looked at elite female soccer players and found that balance board training did not decrease the rate of significant lower extremity injuries. Major injuries, including anterior cruciate ligament (ACL) tears, were actually higher among those doing unstable training.

It's simply not clear-cut enough to say that UST will reduce the risk of injury in most athletes compared to exercises on stable surfaces. But what about making athletes bigger, stronger, faster, and more agile?

Because strength and conditioning training has historically focused primarily on the motor side of things, there could be some merit to emphasizing the sensory component.

Basically, training the more "subtle" ways the body responds to different stimuli – like standing on a surface that shifts from side to side.

This is where we came in with good science and a well-designed approach to see if UST could improve those qualities in healthy, trained athletes.

Everyone had at least six months of consistent strength training and zero experience with unstable surface training. Also, athletes were excluded from the study if they'd had ankle sprains in the previous six months. We wanted to make sure that we were training people, not just "accidentally" rehabbing them.

We thoroughly pre-tested all the athletes with two different jumps, a 40-yard sprint, and an agility running drill, then we began a 10-week strength and conditioning program. The training program for the groups was approximately 98% identical.

The key difference was that the experimental group performed unstable surface training with one lower body exercise in each workout.

The unstable surface training consisted of variations of exercises such as squats, deadlifts, lunges, single-leg squats, and single-leg balances, performed for 2-5 sets of 5-15 reps (or for a certain duration, in the case of balance exercises), and it was all done on 14-inch inflatable rubber discs.

Both groups of athletes still lifted hard whenever they were on stable surfaces, including Olympic lift variations, squats, and deadlifts, all with challenging loads. We simply incorporated UST for one exercise per session, which ended up as a whopping 2% of their overall training volume.

The guys busted their butts for us, and after 10 hard weeks of intense training, we tested them again on the same two jumps and two runs.

Before training, the groups had no difference in their jumps, but after, the stable training group showed improvements in both jumps while the UST group had no significant improvements in either one. 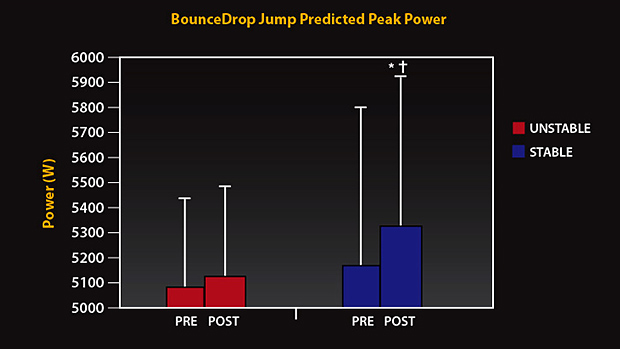 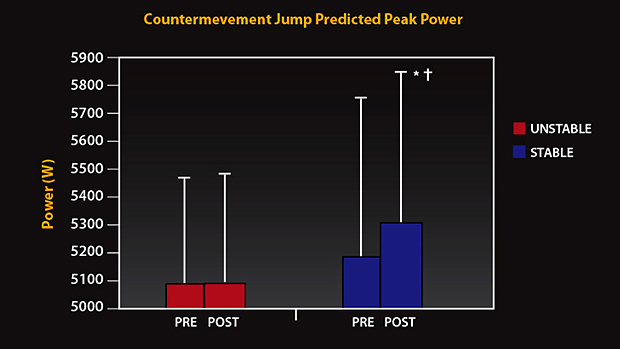 In the 40-yard sprint, there were again no differences between groups before the training, but both groups did see improvements in their sprint time. However, the stable group improved significantly more than the unstable group.

Interestingly, the unstable group was, on average, 0.04 seconds faster than the stable group during pre-testing, but was actually 0.06 seconds slower at post-testing. In high-level athletics, that tenth of a second can easily mean the difference between going home as champs or going home empty-handed. 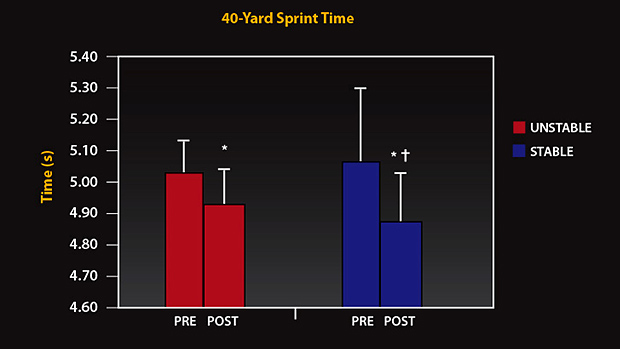 There were no differences between groups for agility test, and while both groups improved significantly from baseline to post-testing, there wasn't a significant difference between the two groups.

It should be noted, however, that the stable group had a slower average time by 0.09 seconds at pre-testing, but was actually 0.03 seconds faster than the unstable group at post-testing. 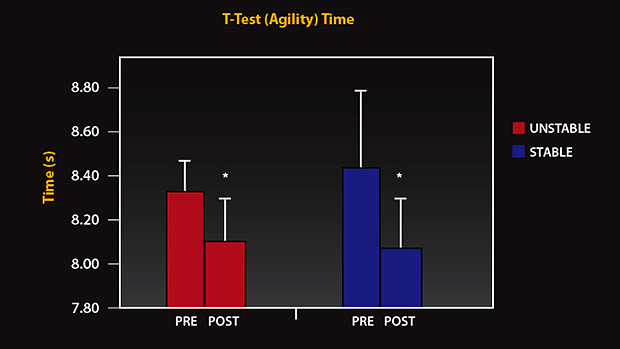 What does this all mean? Well, a measly little 2% adjustment to a training program may not sound like much, but it can obviously have a tremendous impact on a program's success, or lack thereof.

The Problem(s) with Unstable Training

All the possible explanations for the differences between the test groups come back to the fact that UST ignores the principle of specificity of training, at least in the lower body.

Almost all athletes perform on stable surfaces and any instability is applied further up the kinetic chain. In athletics, the stable base is the feet, while the torso and arms are generally the parts being put under the most "instability."

This is why UST could be more useful when training the "core" and upper body rather than the lower body. This would mean movements where the lifter is either seated or lying on a stability ball while performing various exercises.

In the meantime, lower body instability training should be used in much more sport-specific ways via different training methods on stable surfaces. It's all about specificity.

When a running back sprints downfield and gets tackled, the ground never moves underneath him even when his legs or body get hit other players.

Thinking in terms sports-specificity, most athletic movements take place at high velocities and involve the stretch-shortening cycle (SSC) to a great degree.

Unstable surfaces lengthen the pause between the eccentric and concentric phase of SSC movements, so the force production that follows eccentric preloading is considerably less. It's like trying to jump out of sand. You just can't generate enough force because of any stored elastic energy is lost before you can activate it.

Sure, UST may positively impact function in athletes with previous injuries and related proprioceptive deficits. But the bigger problem is that UST impairs SSC function in healthy athletes.

As they say in the sports world, "If you train slow, you'll be slow." And UST forces you to train slowly.

There's a Time and Place for UST

Regardless of what we've seen in practice and in our studies, some folks will still try to justify the use of unstable devices by claiming, "We're using these devices to train balance, not strength and power!"

Fair enough, but you can train balance just fine using stable surfaces, and without needing to compromise any power-related athleticism.

More importantly, balance and proprioception are both skill-specific, and they would be better trained on the same surface present in competition (or real-life, for that matter).

In fact, we've known this for almost 50 years! In 1966, a study found little carryover from static skills (like UST) to dynamic balance skills. This data was confirmed in another study 35 years later.

Basically, if you're trying to improve balance, you better tell me exactly what kind of balance you're improving and for what specific purpose. Otherwise, football players would dominate the ice the first time you put them in hockey skates.

One of the most commonly cited arguments against UST is that it doesn't allow for adequate resistance to provide for strength gains, and that's true. If you squat 405 standing on solid ground, you're not going to squat 425 standing on inflated discs.

UST can actually interfere with the power increases athletes should experience with concurrent stable surface training. In other words, when coaches and trainers implement UST with clients in an attempt to improve proprioception, they're actually negatively affecting other athletic qualities.

Unstable Training for the Lower Body

So what do we do instead? It comes back to specificity.

For example, a destabilizing element could be applied further up the kinetic chain, with the athlete's feet fixed on the ground, essentially simulating what happens when a football player is tackled. Anti-rotation drills in half-kneeling, tall kneeling, and standing positions are good examples.

Single-leg exercises are, by nature, instability training because of the smaller base of support. And, when you use variations where the weight is positioned at the shoulders, you further increase the amount of instability because the center of mass is moved farther from the base of support.

Uneven loading also has merit, as the off-center positioning moves the center of gravity closer to the edge of the base of support, so the athlete must counteract it with muscular activation.

This applies to the cable exercises noted above, as well as rotational medicine ball drills, and also to asymmetrically loaded drills like one-arm farmer's walks and one-arm lateral lunges.

Additionally, classic agility or change-of-direction drills definitely constitute sport-specific instability training because they shift an athlete's center of gravity within his base of support.

To increase the challenge of these drills, movement speed can increase or the base of support can become smaller (e.g., single-leg rather than double-leg deceleration).

Unstable Training for the Upper Body

In addition to "just" rehabbing the lower body, there may be some merit to utilizing upper body UST when we want to maintain muscle activation but reduce stress on the joints. A 2004 study noted that UST allowed muscle activation to be maintained while imposing lower joint torques.

This would be perfect for deloads when a lifter needs to recuperate with lower loads. But again, I'd only recommend using this approach with upper body exercises. One great example would be deloading the barbell bench press by substituting in a stability ball dumbbell press.

Years ago, powerlifting guru Louie Simmons discussed the value of employing the lying Swiss ball dumbbell press to improve shoulder health for guys benching 500+ pounds. Chalk it up as yet another example of how research is often lagging behind what's going on in the trenches.

There may also be some merit to incorporating UST into upper body rehab programs, especially when muscle activation is desired but injured athletes aren't yet prepared for full-on stable surface loading.

For example, loading an athlete with weighted push-ups would require considerable joint stress, while unloaded bodyweight push-ups on a stability ball or BOSU ball could deliver a training effect without the same potentially harmful stress.

When used appropriately, unstable surface training can bring considerable benefits to an athlete's health and performance. But like with most training methods, when it's used wrong, it's a disaster waiting to happen.