Resistance training articles often explore variations on the same old theme. That's because there just aren't many new techniques to report on... at least few that actually work. Occasionally, though, there are exceptions. If you've been searching for a novel way to ramp up muscle growth, here's a strategy that you might not have considered – blood flow restriction (BFR) training.

BFR isn't really a new technique. It's been used for years in Japan and research on the topic dates back to the 90's. Despite emerging evidence of its effectiveness, most lifters have only a vague idea of what BFR involves and how it can be applied within a resistance-training program to enhance results.

BFR entails occluding circulation of the working muscle. This is accomplished by wrapping a restrictive implement around the limb(s) while carrying out dynamic exercise. The objective of BFR is to occlude venous flow without significantly affecting arterial circulation. In this way, blood goes into the muscle but can't escape.

Research on the hypertrophic effects of BFR is compelling. Studies show that simply occluding blood flow to bedridden patients can prevent atrophy and weakness, without performing any training at all (1)!

Moreover, walking with blood flow restricted to the legs – not exactly your classic muscle-building activity – has been found to significantly increase muscle strength and size (2). But the real hypertrophic benefits of BFR occur when it's applied in concert with resistance exercise.

What is the "magic" behind BFR? The exact hypertrophic mechanisms aren't entirely clear but it's believed that metabolic stress plays an important role in the process. Simply stated, metabolic stress is the buildup of training byproducts called metabolites, and is particularly prevalent when training is carried out in an oxygen-limited state, as is seen when circulation is restricted. Metabolites implicated in promoting a hypertrophic response include lactate, inorganic phosphate, and hydrogen ions.

These byproducts are theorized to enhance anabolism by a variety of mechanisms, including mediating the release of growth factors, reactive oxygen species, and cell swelling, and/or systemic agents. Alone or in combination, the production of metabolites drive cellular signaling in a manner that enhances protein synthesis and satellite cell activation – key elements needed for muscle growth (4).

Well-controlled BFR studies use a variety of pneumatic cuffs and belts to occlude flow. These devices are usually inflatable to a given pressure so that researchers can standardize the amount of occlusion applied to the limb (usually based on systolic blood pressure and set at anywhere from 160-200 mm/Hg). The problem is the cuffs used in research are quite expensive, in some cases costing thousands of dollars.

Fortunately you don't need costly implements to perform BFR – good old elastic knee wraps do the trick very nicely (5). The wraps must be long enough to circle your limb several times. However, that's the only requirement; the brand or type of material really doesn't matter.

If the wraps are positioned too low, you won't achieve optimal venous occlusion and the beneficial effects of the strategy will be compromised.

The goal should be to secure the wraps so that they're snug on the limb but not to the point where there's excessive discomfort at rest. On a scale from 1-10, pressure should be about a 7 or so. It generally takes some practice to accurately quantify the pain-pressure connection, but after a few sessions you should have a clear sense of just how tightly to wrap.

It's important to remember that the purpose of BFR is to impede venous return, not arterial flow into the muscle. Wrap too tightly and all local circulation becomes occluded. This increases the perceived exertion of the exercise with a corresponding reduction in total training volume. And if there's one thing that's clear in the literature, higher exercise volumes are positively associated with increases in hypertrophy.

Cuff width also is an important consideration. Research shows that a wide cuff cuts off arterial circulation at a lower pressure than narrower cuffs (6), thereby impairing your ability to resist fatigue. It should therefore come as no surprise that the use of a wide cuff during BFR has been found to reduce the extent of hypertrophy (7).

The best solution is to aim for a width of a couple of inches or so, which is approximately the size of most knee wraps. From a practical standpoint, this means you should bind the wraps as closely over one another as possible so there's maximum overlap.

In the vast majority of studies, BFR has been carried out in isolation so that it's the sole training stimulus used over the course of a given research protocol. Training in this fashion may be okay for elderly individuals or those rehabbing from an injury, but if you're an experienced lifter, doing just BFR training alone isn't going to cut it. Your best results are achieved by integrating the technique into a traditional hypertrophy training program.

There are a number of different ways to go about incorporating BFR into your workout regimen. After much experimentation, the best approach I've found is to use it as a "finishing" technique. This involves performing a moderate to heavy load hypertrophy protocol first in a session and then finishing up with several sets of BFR training.

Here are the specifics. Although BFR can be employed with pretty much any exercise, it seems to work best with single-joint movements. Biceps curls, triceps pressdowns, leg extensions, etc., are all excellent choices here. Perform multi-joint exercises such as squats, rows, and pressing movements in the traditional fashion.

The weights used during BFR should be light. As a rule, keep the loads at ~20-30% of 1RM for a given exercise. Combined with occlusion, you should get about ~20-25 reps on the first set.

Thereafter, perform a few additional sets of the chosen exercise while keeping rest periods at about 30 seconds or so. The short rest interval helps to heighten metabolic stress and pooling of blood in the working muscle. It also necessarily reduces the number of reps you're able to perform on successive sets.

By the final set, assuming you maintain the same load, you'll probably only get around 8-10 reps. That's okay. As long as you follow the protocol as described, you'll achieve optimal anabolic benefits.

It's also important to keep the limbs continually restricted for the duration of the exercise. Research shows that untying the wraps between sets significantly reduces metabolic stress, thereby inhibiting the growth stimulus (8). Remove the wraps only after you've finished the final BFR set. Do it right and you'll get a skin-splitting pump like you've never experienced in your life.

At least some of your sets should be taken to the point of muscular failure. Understand, however, that going to failure in BFR requires a different mindset than during traditional resistance exercise.

With BFR your limbs get heavier with each successive rep. After a point, you'll feel as though they simply can't move. This is where mental fortitude comes into play. Because the loads are so light, you can will yourself to push through the sensation and pump out a few additional reps. Dig deep and squeeze out every last rep possible. Ultimately this is how you maximize metabolite accumulation and its associated anabolic response.

Integrating BFR into your training can really ramp up your muscular gains. With continued implementation into a well-designed resistance training program, it may well be the strategy that takes your muscular development to new heights. 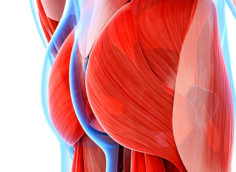 Ah, push it. Push it real good. It looks weird, but this is a damn effective exercise for strong glutes.
Training
Gareth Sapstead September 27 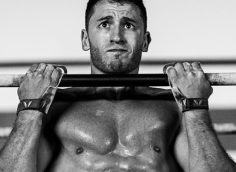 Once you get these simple exercises down, the pull-up will be a breeze.
Training
Tanner Shuck April 25

Think you have to do tons of cardio to get lean? Here are 10 reasons why you're wrong.
Tips, Training
Nate Miyaki November 30