Getting stronger requires more than just adding plates to the same three lifts. It requires some actual thought when it comes to exercise selection.

Here are the seven most strategic lifts you're probably not doing. We'll go over what they target and how they'll make you stronger on the big three.

When we look at primary exercises where the lower body plays a major role, like the deadlift and squat, a significant contributor to fatigue is axial loading (4). Axial loading is where your spine is under a compressive load such as a barbell squat.

However, the belt squat allows you to bypass axial loading. This makes it an excellent exercise for developing strength because you can maintain high intensities without generating nearly as much fatigue when compared to a barbell squat.

The sticking point on the barbell bench press for most lifters occurs at the midway point (about 6-8 inches off the chest). It's a common problem.

During the typical powerlifting setup, your back is arched and you use leg drive, which generates an impulse force to rapidly develop momentum to initiate the lift. This is great in competition where you need to use every advantage, but in training we can eliminate these benefits strategically to improve bench press performance.

The floor press forces you to remain flat and doesn't allow for leg drive. And since the bottom end of the floor press and the sticking point of your competition bench press are generally the same, you can train your sticking point directly while simultaneously increasing your raw strength.

The reverse hyper was introduced by Louie Simmons. It's gained popularity, but there are still a surprising number of people who are unaware of this exercise.

Strength athletes generally train movements to build strength, not muscles. But this can become a limiting factor. For example, if an athlete's quads can generate 600 pounds of force but his or her low back can only brace 400 pounds, the rate-limiting factor is the low back.

This is where adopting more of a bodybuilding approach can be highly beneficial to specific athletes. The reverse hyper directly trains your glutes and hamstrings but primarily targets your low back (5).

Training your low back can improve your ability to brace during heavy squats and deadlifts. An additional upside is that the exercise has a low fatigue cost and actually has restorative properties due to the decompression that occurs during the movement (5).

This is an effective variation of the low-bar squat. A common error many lifters make is the chest-fall pattern: their hips shoot up and their chests fall forward as they stand up with the weight. It almost looks like a good morning.

This is most often associated with weak quads. But a SSB squat distributes load differently than a traditional low-bar squat which alters the torque requirements. Because of your upright position, the SSB squat requires more torque from the knees compared to a standard low-bar squat (6).

Supplementary work for strength development is often written off because it's not specific. Big mistake. Increasing your muscle fibers' cross sectional area directly relates to increased force production (7). And since the triceps play an important role in the bench press, they often require additional work.

To understand the benefits of the band pressdown over other triceps exercises, we need to understand torque. Torque is a twisting force that tends to cause rotation (8).

As you complete the pressdown, the distance shortens and the exercise becomes easier. But using a band can alter this force curve. Since the band is maximally stretched at the bottom of the pressdown it increases the torque requirement of the elbow (8). This forces the triceps to work hard throughout the entire range of motion, creating a novel stimulus.

"Deformation" is the alteration in shape or size of a body under the influence of mechanical forces (9). This is observed in lifting near 1RM loads where you see a technical breakdown (rounding of the back, hips shooting up, etc).

Some researchers have observed up to 40 degrees of spinal flexion occurring during the squat (10). This deformation decreases mechanical efficiency which ultimately decreases the maximal weight you're capable of lifting.

The Pendlay row trains your low back, lats, and upper back. This increases back strength as well as bracing ability to minimize deformation during exercises involving heavy loads such as squats, deadlifts, and bench press.

What does all this even mean? Well, increased efficiency translates to increased performance in 1RM strength. You pull more weight.

The torque mechanics are what drive strength improvements in this lift. Check out this diagram:

At the bottom end of the lift, the linear force is furthest from the axis of rotation (in this case the hips). The muscles acting on the hips and spine to brace and produce hip extension are the hamstrings, glutes, and spinal erector muscles.

Good mornings improve the overall strength of your posterior chain helping you minimize deformation in your primary lifts and efficiently manage heavier loads when executing your main lifts.

This exercise makes even the hardest plank variation seem easy. Check it out and give it a shot.
Tips, Training
Tony Gentilcore September 11

We look to science to find out which exercise reins supreme for lats, traps, and biceps. Bonus: Two cool tricks to get better results with both.
Bodybuilding, Pull-Up, Training
Tyler Thomas March 10 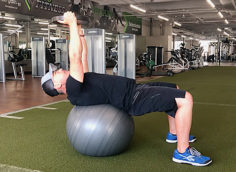 It's not a new exercise, but a better way to do pulldowns that will turn on muscle growth fast. Check it out.
Back, Bodybuilding, Tips, Training
Eric Bach April 10