Quick, run to a mirror and flex your arm.

Or, if you're at work and reading T Nation on the sly while the boss isn't looking, at least visualize yourself flexing your arm in the mirror.

Did you do it?

Okay, good. Now, how many of you flexed your biceps? We'd guess a majority.

The triceps get no love, except for maybe a few sets of rope pulldowns after your 36 sets of biceps curls. But what most aesthetic lifters don't realize is that their triceps make up a large percentage of their upper arm mass. In fact, when you're standing relaxed, it's the triceps that show the world that you're a powerful, weight-liftin' SOB.

In our first "Best of" piece, we focused on the most effective exercises and training techniques for the ever-popular biceps. Now let's turn our attention to the arm muscles that really give you that look of raw power: the triceps.

Ask a dozen hypertrophy experts to name the most effective triceps exercise and most will name the dip. As Coach Mike Robertson notes, "A basic rule of thumb should be this: If it uses more weight, it's probably a more effective exercise. For the triceps, that means dips and close-grip bench presses."

Unlike some triceps movements, dips hit every head of the triceps: the long, medial, and lateral. While it's okay to target individual heads to bring up weaknesses, the core of your triceps program should revolve around big movers like the dip.

Still doubt the power of the dip? Look at the triceps development of male gymnasts. They have massive triceps, largely due to their use of the dipping movement in their sport.

Problem is, most gym-lifters use the dip as a chest exercise. That's fine, it's a good one for that muscle group, but if you want to put most of the work on the triceps, here are some rules to keep in mind:

Already knew all that and ready to take it to the next level? Here are three intensity-boosting dip challenges: 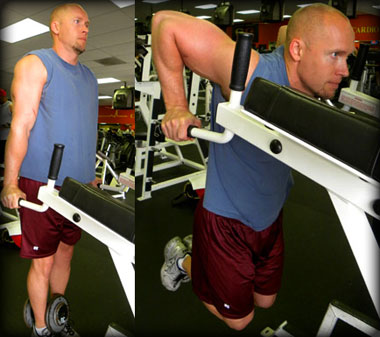 Hold a heavy dumbbell between your feet and perform 6-10 reps. Once you're one rep short of failure, simply let go of the dumbbell with your feet and rep out until failure with body weight alone. Ouch.

Hop up on the parallel bars and stabilize yourself in the top position. Now lower your body to an 8-second count until your biceps touch your forearms. Press yourself back up using your arms and legs and perform two more 8-second, negative-only reps. That's one "set." Rest for two minutes then repeat for eight total sets! 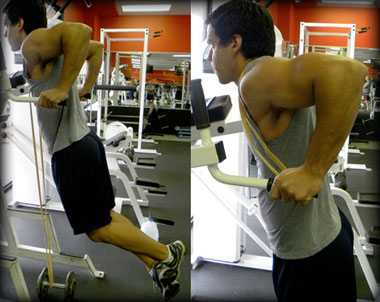 Perform dips using a band for added resistance and a challenging new loading protocol. You can attach the band to a dumbbell at your feet or place it across your upper back as shown in the photo to the right. Once you near failure, rip off the band and continue with body weight or until you throw up. We suggest the latter for maximum awesomeness.

"It's not always the new exercise that caused the sudden gains in size," Biotest head honcho Tim Patterson once told editor Chris Shugart. "It's very often the sequence of the exercises in the workout."

Charles Poliquin, who's published entire books on hypertrophy methods for the arms, has a painful workout protocol he calls omni reps that demonstrate this "secret of sequence."

Omni-reps are basically an extended series of three exercises performed one after the other with no rest. For this reason, omni-reps are usually performed at the same station or with the same piece of equipment. Here's a workout using this method that will set your arms on fire and reignite triceps growth! 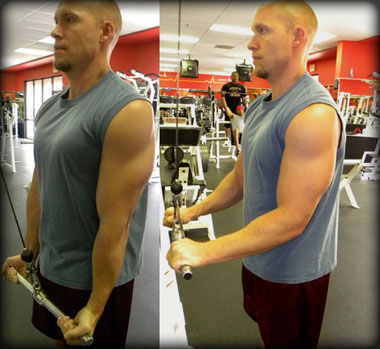 Note: These are done just as you would do a standard straight bar pushdown, but with the palms facing up towards the ceiling. 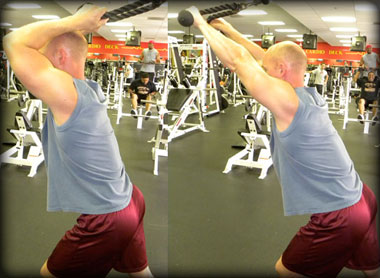 Really explode in the lifting or concentric portion of the movement, then lower the weight slowly and under control.

Perform all three exercises without resting: bam, bam, bam. That's one set. Rest two minutes between sets and shoot for three to four total sets. Or, perform your regular triceps workout and then one set of this omni-rep routine as a "finisher."

3 – The Doublé Method for Triceps

Weightlifting coach Pierre Roy, mentor to many of today's big-name strength coaches, introduced the concept of doublés. Basically, he had his Olympic athletes perform the same lift twice in a workout if he wanted rapid improvement in that particular lift. For example, he might have a weightlifter squat at the beginning of the workout and again at the end.

Poliquin and Christian Thibaudeau have tested this method with their athletes and bodybuilders and found it to be brutally effective. "My guys report unbelievable muscle soreness and subsequent growth," says Poliquin.

Here's how to use this method to add quick size to your tri's:

Repeat steps 1 to 3 twice. You'll probably have to drop the weight 5-10 pounds every new doublé. 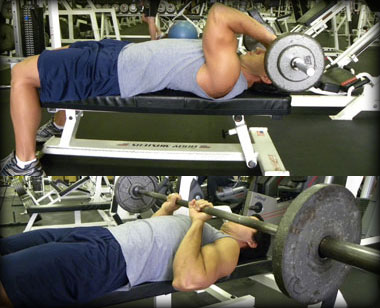 You can follow this up with a couple of other triceps movements, but let this doublé be the cornerstone of your workout for a brief period (until your body adapts to it).

4 – Seated Half-Presses in a Power Rack 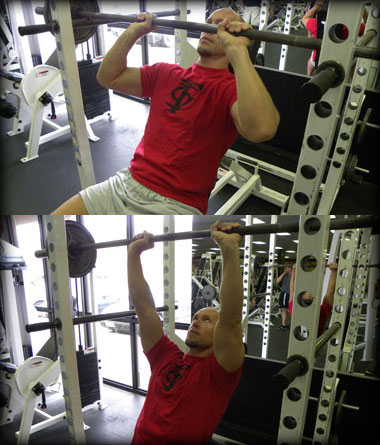 We first heard about this exercise from powerlifting maharishi Louie Simmons.

One thing that's cool about it is that it helps to pack meat onto the lateral head of the triceps, which is the head that's largely underdeveloped in most lifters. You can tell when it's developed though, because it'll make the back of the triceps look like an X, in addition to making you appear to be wider. And that, boys and girls, is body building.

Set up an adjustable incline bench inside a power rack with the inclination of the bench being at 80-90 degrees in relation to the ground. Adjust the pins in the power rack so that the bar is at hairline level for the starting position. Your grip on the bar should be about shoulder width. The elbows should be pointing outward.

Simply press the weight up as if you were doing a conventional press. However, make sure that you use a "dead stop" in the bottom position. In other words, let the weight come to a complete stop against the pins for at least a couple of seconds after each rep. That way with each rep you'll have to overcome inertia. It'll also keep you from bouncing the bar off the pins like a dork. 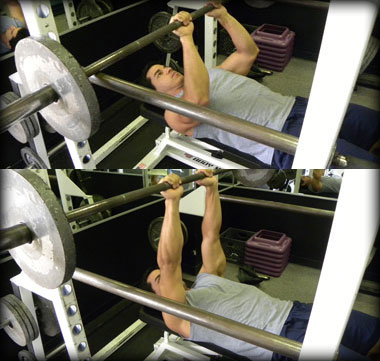 You know the close-grip bench press is a great triceps developer, right up there with the dip. So instead of going over the basic movement again, we'll lay something a little evil on ya: the supramaximal hold version.

Here's Coach Chad Waterbury explaining his killer variation: "Set the pins in a power rack so you can only lower the barbell 4-6 inches. Start by holding a load that represents 125% of your close-grip 1RM.

"Hold the load just short of lockout for 10 seconds, then rest the load on the pins. Rest 30 seconds and perform 3 partial reps (from pins to lock-out) with the largest load you can handle. Rest 180 seconds and repeat the entire sequence twice more."

Waterbury forgot to add, "Then fetch your spleen from under the StairMaster." 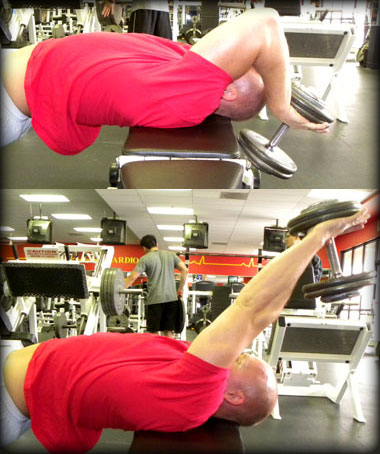 This movement was "discovered" by doing dumbbell pullovers the wrong way.

With traditional pullovers, the lifter attempts to keep the arms relatively straight, but if he bends the elbows and keeps them fixed, he'll get one heck of a triceps exercise!

Lie on a flat bench and hold one dumbbell with both hands. The elbows should be pointed behind your head and the upper arms should remain relatively fixed throughout the movement.

Lower the dumbbell into an extreme stretch position, pause, then bring it back up and squeeze your triceps for a couple of seconds at the top. Given that the arms are kept at an angle, tension remains on the triceps for the entire movement. The end result is that the movement is much more effective than traditional seated dumbbell extensions.

Go heavy with this one and shoot for four to six reps per set. 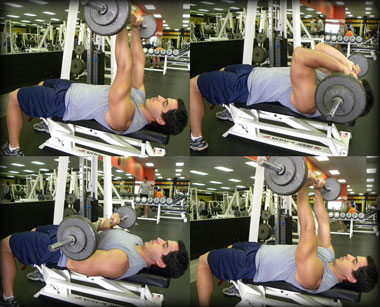 This one just might have been invented by editor-in-chief TC. (If not, big deal. It's not like there are any royalties.)

TC calls them "California Skull Crushers" as they're a hybrid movement between close-grip bench presses and lying triceps extensions. It's true that there's already a hybrid between these two movements that's known as the California Press, but TC has taken this particular movement and modified it even further.

To do these properly, get in the same position as you would for a close-grip bench press, using either an EZ-curl bar or a standard Olympic bar. Press the bar directly over the chest, keeping the elbows close to the body. Then, instead of lowering the bar back to the starting position, lower the bar to your forehead as if you were doing a skull crusher, or the eccentric portion of a lying triceps extension.

Here comes the tricky part. After you lower the bar to your forehead (or a half-inch above it so you don't cave the sucker in), pull the bar back to the starting position of the close-grip bench press and do rep number 2.

Let's go through the movement again while sitting in your chair in front of the computer, okay? Stick your arms straight out in front of your chest and pretend you're holding a bar. Now, bend your arms at the elbows and bring the "bar" to your forehead. And lastly, pull the "bar" down to chest level by pulling your elbows back until they're next to your sides.

In a way, you're making a kind of triangle motion with the bar as it comes up, down, and across back to the starting position.

Try this movement out and see if it doesn't both add mass to your triceps and poundage to your bench press.

One last tip: If you normally train your biceps and triceps in the same session, for the love of Arnold you should occasionally start with the triceps! (You know you don't, mirror-boy.)

Give these exercises and techniques a shot and get ready to split some shirtsleeves. 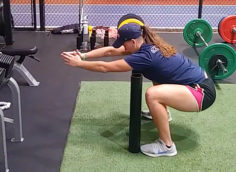 This movement blocking drill is a good first step when it comes to cleaning up your squat form.
Exercise Coaching, Legs, Squat, Tips
Travis Hansen October 26