Compound vs. isolation: We’ve seen it all. From the bodybuilders and trainers who perform tons of isolation work for the biceps, to those who do none at all, preferring instead to skip the curls and stick to chin-ups.

And here’s the interesting thing: After a while they all have some pretty damn impressive biceps.

So, you want bigger biceps? Then we say you need a variety of exercises, both isolation and compound, performed with ball-busting intensity for an appreciable amount of time. With that in mind, here are some of the best biceps training movements and techniques we’ve seen. 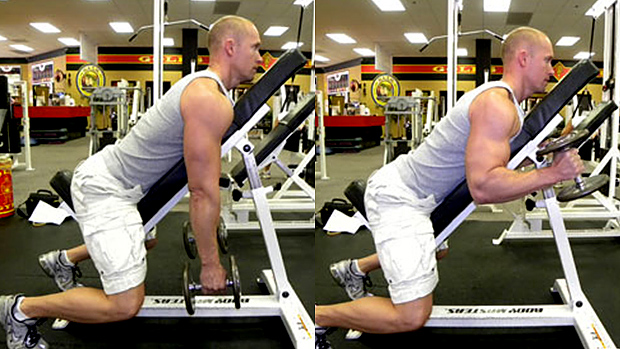 Fact: If your upper arm development has stagnated, then hammer-grip curls (palms facing in, not up) can reboot your progress by targeting the often under-developed brachialis muscle. If you’ve tried that already, then here’s an exercise from TC to take it to the next level.

Grab an incline bench and adjust it so that it’s at a 60 to 70-degree angle. Get some dumbbells and put your chest on the pad of the bench. Allow your arms to hang straight down, then curl them up so that the dumbbells touch your shoulders. Now, visualize how you’re going to brush your teeth without the use of your arms the next day, ’cause this is gonna hurt tomorrow!

The secret is to allow your arms to straighten out completely at the bottom of the movement. None of that partial rep horseshit.

Since you can’t recruit the front delts with this exercises and it’s impossible to use body english, this is more of a “pure” biceps movement. It’ll also help recruit the long head of the biceps, which Charles Poliquin says is the most neglected head of the muscle group. 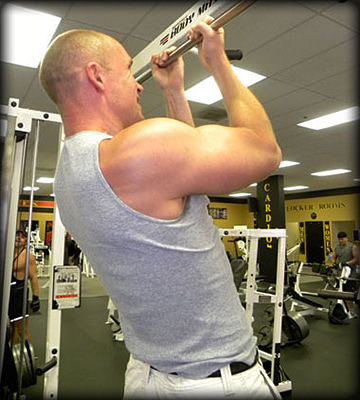 Perform a single chin-up that takes you one minute to complete. That’s 30 seconds up, 30 seconds down.

What’s that? Are we kidding? No, we’re not kidding.

This is actually a classic training technique that’s been around for decades. (Nods to Dr. Ellington Darden for keeping the technique alive.) While we wouldn’t train only in this super-slow manner, this particular exercise can be an effective rut-buster.

Either have a partner count out the seconds for you, or set a timer to go off every 10 to 30 seconds. From a dead-hang position, pull yourself slowly but continually up to the bar until your chin clears it. Now lower yourself down just as slowly, taking another 30 seconds to reach dead hang.

It’ll take a little practice to get the pacing right. Also, you might shit a kidney. You’ve been warned.

Another variation of this painful challenge is to move up and down in increments of a couple of inches, then hold each position isometrically for several seconds.

You can perform this movement at the beginning of your workout or as a “finisher” at the end. Either way, by the end of this single rep you’re going to be shaking like a hoochie’s caboose in a hip-hop video. 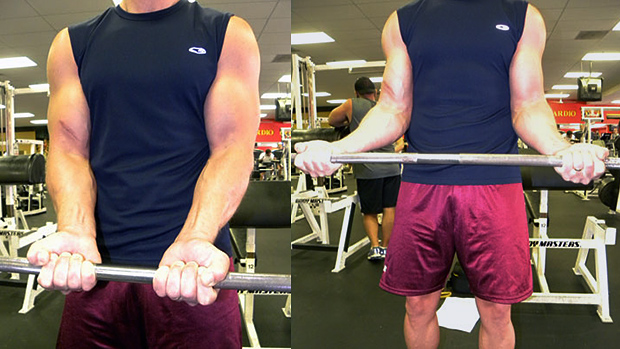 The barbell curl is the missionary position of biceps training: nothing fancy, but it gets the job done.

But as Christian Thibaudeau and countless old-school pros before him have taught us, the width of your grip can really change the results you’ll get from the exercise.

To recruit the long head or outer portion: Use a narrower grip with a wider elbow position.

To preferentially recruit the short head or inner portion: Use a wider grip and a narrower elbow position.

Okay, so how do you put this to work? There are a lot of methods and programs, but here’s a couple of good ideas:

If you’re performing four sets of biceps curls in your workout, do two sets with a wide grip and two sets with a narrower grip. Or try a set of wide grip, a set of medium grip, and a set of narrow grip for a three-set biceps workout. 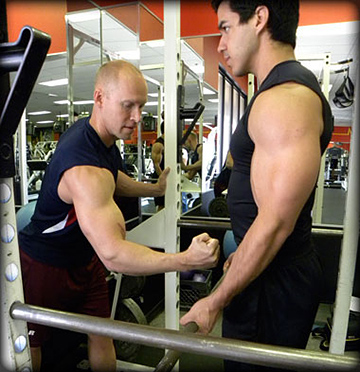 You’ve heard the term “shocking the muscle” for years in the bodybuilding world, right? Well, this routine, taught to us by Charles Poliquin, might be the most shocking method we’ve tried.

Warning! Make sure the pins allow you to perform a range of motion that’s only about 4 inches. You don’t want to have someone punch the bar down when it’s in mid-range position because it might cause the biceps to be damaged. And not in a good way! 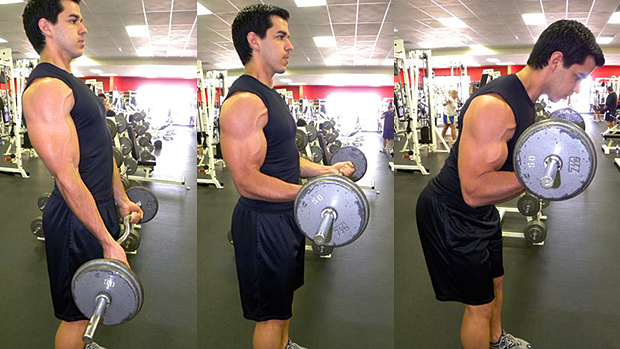 The Gironda perfect curl was invented by legendary bodybuilding guru Vince Gironda and taught to us by legendary bald guy Christian Thibaudeau. Coach Thibs believes this to be the best biceps-building exercise in existence!

This change of angle during the movement really places a huge tension on the biceps during the execution of the entire exercise. But remember, it’s not a cheat curl! Don’t swing your upper torso into the new position; do it slowly.

Start using a relatively low weight as the perfect curl is much harder than a regular curl. 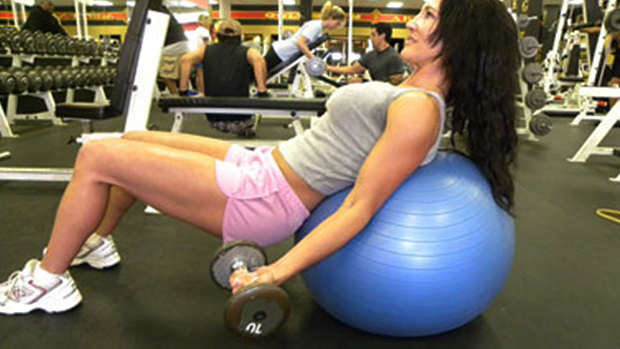 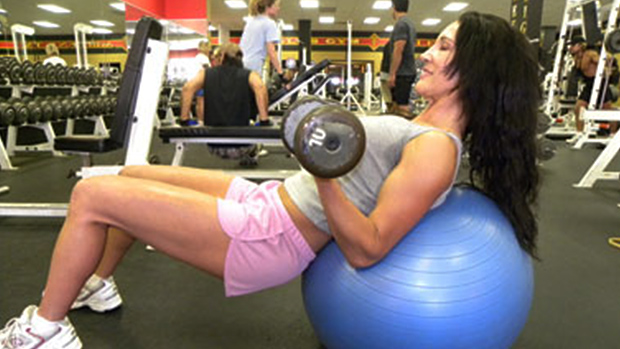 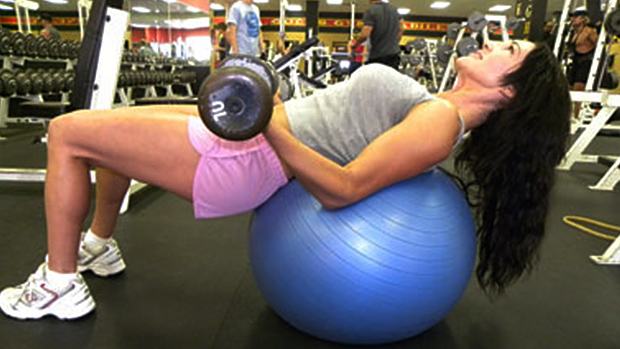 Don’t freak out. We’re not going to suggest doing one-legged squats on a Swiss ball while juggling hamsters, a.k.a. the “Darcy” workout from CrossFit. No, we’re talking about a damn fine concept Charles Poliquin first wrote about here almost a decade ago.

The idea is to use a stability ball to modify the strength curve of dumbbell curls. This allows you to lower a seemingly “heavier” weight than you lift by shifting your body position. Here’s how to do it:

Sit with your back and triceps resting against the side of a Swiss ball. Perform the concentric (lifting) range of a seated dumbbell curl. Once you curl the dumbbells to the top, raise your hips so that your thighs are parallel to the floor. Your upper body should then be literally on top of the ball.

Lower the dumbbells down and away from you. Lower the hips and repeat until you hit your target number of reps. 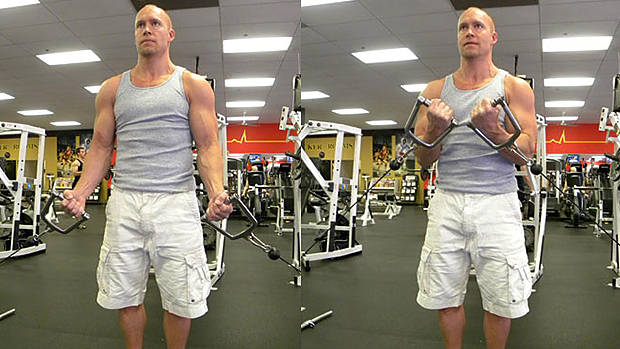 Cable machines sometimes get lumped into the same category as fixed, selectorized machines i.e. generally not as good as free weights. That’s too bad, because cables can be great muscle-building tools because they put a constant and relatively equal tension on the working muscle throughout the whole range of motion. And that’s good stuff for biceps training.

In the rotated cable curl, the cables will try to pull your arms down and away from your body. Resist this pull and try to keep the forearms as close to the body as possible. You can also use more of a front-of-body position as shown in the pics.

Thibaudeau suggests stopping about one or two inches before the end of the maximum extension. This will place a lot of stress on the biceps when using cables and will provide for a powerful growth stimulus. 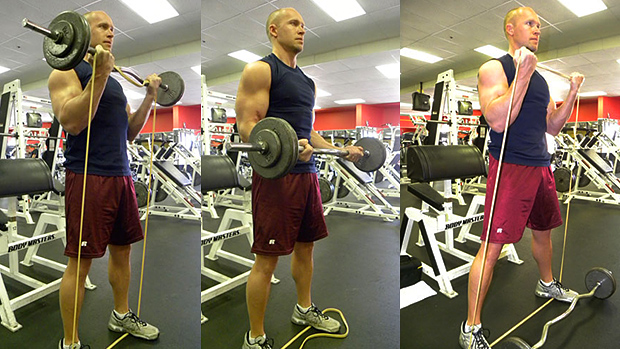 This one will cause you to shoot your pancreas across the gym. The orifice from which it will emerge varies by individual.

You’ll need a resistance band for this special drop set. Stand on the band and hold the other end in your hands along with an EZ-curl bar or barbell. Shoot for 8-10 reps, using both the bar and the band as your resistance source.

Whoosh! There goes your pancreas.

Most of us don’t have easy access to a climbing rope and a tall ceiling, but that’s okay. Rope pulling on the horizontal works even better. Hey, a thousand strongman competitors can’t be wrong.

When you attach a rope to something – a few heavy plates, a pick-up truck, a dragging sled, your ex-wife – and pull it toward you, you’re giving the biceps a powerful stimulus to grow and targeting them in a unfamiliar way compared to what you do in the gym. Also, there’s no eccentric or negative, making this a unique movement.

Remember our rule here for big biceps: It’s the effort in which you put forth, not just the special exercises you’ve learned here. So grit your teeth and put these movements and techniques to work!