Okay, we’re going to say this one last time:

If your diet sucks and your body fat level is high, you aren’t going to have visible abs, no matter how much you train them.

But there’s a caveat. Just because you can’t currently see your abs doesn’t mean you shouldn’t train them. After all, you hopefully plan on seeing them one day, right? And skipping any muscle group, especially those that involve the very core of your body, is a recipe for poor performance and future injury.

One more thing before we tell you about some of the best ab exercises and training techniques we’ve tried over the last decade: Yes, big compound exercises like deadlifts, squats, and pull-ups bring the various ab muscles into play. That’s cool, you should definitely be doing those.

But that doesn’t mean you should skip doing effective, direct abdominal exercises. The men and women with the most admirable physiques sure don’t. Neither should you.

With all that out of the way, let’s get to the cool stuff!

Things You Don’t Know About Abs

Bodybuilding expert Christian Thibaudeau has exhaustively researched ab training for physique athletes, and he’s made some very cool discoveries that cut through the bullshit. Here’s a quick and dirty summary:

Cool, huh? Now, let’s get to the exercises and training routines!

1 – Accentuated Crunches on the Bench

We learned this one from Charles Poliquin. That’s significant because Coach Poliquin is one of those “just squat and deadlift and the abs will take care of themselves” guys. And even he likes this unique ab exercise.

Accentuated crunches will expose your rectus abdominis to a different type of stimulus, with just the right amount of eccentric loading. Here’s how to do it:

Most people dislike ab training. And it’s especially difficult psychologically to get pumped about it when you can’t see your abs yet!

Another issue is where in your workout you place ab training. Most people “toss in” ab work at the end of their planned workout for that day. In other words, they do their ab training when they’re physically and mentally fatigued and ready to get the hell out of the gym!

Staggered training, used by everyone from Arnold in his prime to Coach Thibaudeau today, can solve all these issues. Here’s how Thibs explains it:

“Perform one set of abdominal work after each set of every exercise in your regular weight training workout,” says Thibs. “This allows you to perform anywhere from 9 to 20 sets of abs without even noticing it!”

So for example, if you’re doing three sets of bench press, simply perform an ab exercise between each set. Then, when you move to dumbbell flyes, choose another ab exercise and again perform a set between each round of flyes.

Here’s a unique abs/obliques movement we picked up from Dave Tate.

The movement is performed on a standard cable machine with the use of a single D-handle. Begin by standing with your side to the machine. Grab the D-handle and pull it down to your side so your arm is locked.

From here, perform the same movement as you would with a one-arm dumbbell side bend. The difference with this is the resistance is now opposite what it would be with dumbbells. The tension is now on the downward phase.

Before you begin, remember to tighten your abs and obliques. Bend to the side and make sure to keep a controlled tempo. Flex your obliques very hard when you reach the midpoint and keep your upper body erect. Return to the start position slowly while keeping as much tension on the obliques as you can.

The serratus anterior is that cool-looking muscle on the side of the upper abs area, sometimes referred to as the “boxer’s muscle.” It isn’t technically an abdominal muscle, but it completes the look of a muscular, shredded torso.

Problem is, it’s kinda tough to train directly. In fact, many strength coaches say to forget about targeting the serratus and instead just get your body fat very low and do lots of overhead presses and pullovers, which bring the serratus into play.

Not bad advice really, but you can directly target this muscle group. Here’s how:

1 – Do the serratus cable crunch.

We can’t remember if we learned this one from a trainer somewhere or if we “invented” it. Regardless, editor Chris Shugart has successfully used this exercise to hypertrophy the hard-to-hit serratus.

Here’s how it works. Stand sideways to a high cable with a D-handle. If your left side is facing the handle, reach up with your left hand and grab it. Place your right hand on the left serratus. This is a form of “touch training” and will help you target the serratus and work it fully.

Bend in the opposite direction to get a full stretch, then “crunch” the serratus down and forward slightly. Hold the crunched position for a few seconds for full effect. After 6 to 12 reps, switch and train the other side.

Poliquin notes: “Usually a guy with no serratus, assuming his body fat level is low, hasn’t done enough full range of motion movements with dumbbells, such as dumbbell bench press and dumbbell rows. He’s been using barbells too much (less range of motion).”

So, easy solution: If your serratus sucks and you use mostly barbells, switch to dumbbells.

We remember seeing those silly-looking “ab wheel” gadgets at K-Mart when we were kids. The box had a photo of a leotard-clad woman in the doggy-style position about to roll out on a device that looked like a lawnmower wheel on a stick. We liked the gal, but we thought the gadget was goofy.

Years passed, we got into training, some guy named Pavel said the ab wheel was actually a pretty cool tool, so we forked over five bucks and tried it.

Ho-ly crap! It was vicious. To use an old-school bodybuilding term, it seemed to “shock” our abs, probably due to contracting them in an extreme stretch position, which many believe is crucial for fast hypertrophy. And the next day? Exquisite soreness, telling us that despite all our previous ab training, the ab wheel was doing something new.

Here are a few ways to use the forward roll:

The objective is simple: Extend your body forward until it’s parallel to the ground. However, to make this drill effective you must:

Same as above, but use a barbell with some small plates on it instead of a wheel.

Same as above, but use a Swiss ball instead of a wheel or barbell. This is a good one to use if the standard ab wheel forward roll is too difficult for you. (Weenie.)

We learned this variation from Chad Waterbury. Stand up straight and place your hands on the floor in front of you. Now, keeping the weight on the hands and toes, “walk out” until your arms are as far out in front of you as possible, then walk back up.

A reverse crunch is difficult enough for most people. Add in the instability of a Swiss ball – which causes your abs to fire erratically as you fight to attain balance then maintain it – and you have a very advanced ab training tool.

Place a Swiss ball or stability ball near a power rack or something stable that you can hold onto. Lie back on the ball and grab the power rack. Now raise and lower the legs until you vomit. Fun!

Time to channel your inner gymnast. Jump up and grab a pull-up bar. Bring your legs up and hold them in the air as straight as possible. Once you’re steady, begin to slowly lower the legs.

Try to lower them as slowly as possible. “Cheat” the legs back up and repeat until your legs are dropping quickly because of abdominal fatigue. Then, if you’re a real masochist, finish off with AMRAP (as many reps as possible) of standard bent-knee leg raises. 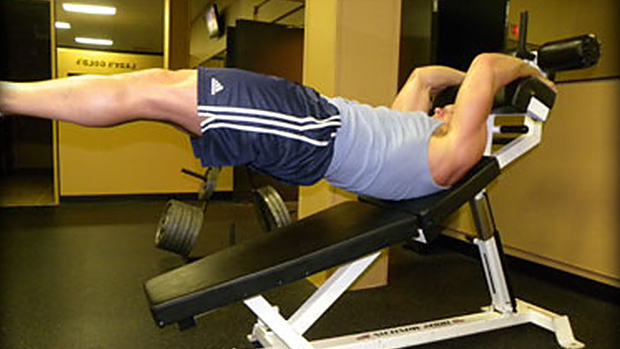 Do we even have to say it? This one is not for newbs.

This exercise is often attributed to Bruce Lee, but we say Chuck Norris invented it… after he invented Bruce Lee. And China.

The video is self-explanatory; just remember to roll all the way back on your upper back/traps. To keep the tension on the core, don’t come quite all the way up.

“I don’t like regular Russian twists as I don’t feel they’re that effective,” notes Thibaudeau. “However, I find this variation to be extremely effective…and painful!”

Anchor yourself on an incline board or roman chair, then do a half sit-up so that your lower back isn’t in contact with the board. Keep that position during the whole exercise.

The execution is simple: rotate your torso form side to side. The arms are fully stretched out in front of you and they don’t move – only the trunk is mobile. Try for the longest range of motion possible. Perform 8-12 reps per side, or 8-12 full rotations. Hold a weight if you’re a stud.

While we like adding resistance to ab training, it’s not for everyone. Beginners and those who have dysfunctional abs – people who use their psoas and rectus femoris because they can’t “feel” their abs working – will want to use unweighted exercises performed slowly as first. Use touch training and place your hand on the muscle you’re trying to train, then contract that muscle maximally.

Give these powerful ab training movements and routines a try. That – and laying off the post-workout doughnuts – will help you find those abs you’ve been searching for!