The Art of War

Think of your body as a vast army made up of many regiments and divisions. This army has great potential; all it needs is the right leadership. For athletes and bodybuilders, the nervous system is the General of this army. It's the nervous system which directs and coordinates muscular actions. As such, we're pretty much as strong as our nervous system allows us to be.

What do I mean by "allow"? There are several protective mechanisms which exist in our bodies and these safeguards can greatly impair our efforts to display maximal strength. Some rare cases in which our safeguards are "turned off" – a frail woman lifting a car to save her kid for example – give us an idea about our real strength potential. As one strength coach says, "Your muscles already have the strength to lift a car; they just don't know it yet!"

The lower the activation threshold of these safeguards, the harder it'll be for you to produce a large amount of force. This can help explain how seemingly "average looking" individuals can sometimes actually produce more force than bulkier, more muscular people: their safeguards have a very high activation threshold. They might be able to use 70 to 80% of their strength potential while you may only be able to use 40 to 50%.

Many bodybuilders and athletes have a lot of muscle mass, but a very low threshold. This is like having an army with 1,000 soldiers, but only 400 actually willing to fight. On the other hand, another army might only have 800 soldiers, but 700 of them make William Wallace in Braveheart look like a sissy. Obviously the second army will be more effective and efficient. The same is true for you: having a lot of muscles is good, but you have to get your "soldiers" to work for you!

So, how can you motivate your troops? There are several proven methods which may help you increase your capacity to produce force in the gym. Some are long-term solutions while others are short term. A program involving both of these can help you drastically increase your strength potential much faster than you'd have thought possible. These methods involve playing with the reflex actions and the central nervous system (CNS).

First, I'll discuss three short-term methods that can help you produce a bit more strength right away. It might enable you to produce 3 to 5% more force, which may not seem like much, but will allow you to place more stimulation on your muscles which will increase your rate of strength and muscle gains. These three methods are:

It's well documented that intense stretching prior to a muscle contraction greatly reduces the force production potential from that contraction. That's one of the reasons why it's best to stretch after a workout rather than before it.

We can use this little tidbit of information to our advantage. There's this thing called antagonist co-contraction which can actually reduce our capacity to lift big weights. How? It's fairly simple to understand: if an antagonist muscle (a muscle of the opposite function than the target muscle) has a lot of tension in it, it'll take more force for the agonist muscle to produce a certain movement. For example, if your triceps are contracting, it'll be harder to curl big weights. The triceps are elbow extensors while the biceps are elbow flexors; the contraction of an extensor will make the flexion harder to do.

In the bench press, the prime movers and synergists (agonists) are: the anterior deltoids, the triceps, and the pectorals/serratus. So we can conclude that the antagonists are the posterior deltoids, the biceps, and the latissimus dorsi/rhomboids. Now we know that stretching a muscle will reduce its capacity to contract, so stretching the antagonists right before attempting a bench press will facilitate the action of the prime movers and synergists!

The following exercise is an adequate way to stretch these antagonists. Perform the stretch for 30 seconds about one minute before each bench press set.

Research has found that a brief maximal voluntary contraction (BMVC) of the antagonists immediately prior to a movement increases the force production of the agonists (Caiozzo et al. 1981, D.G. Sale, 1986).

It's been theorized that the pre-contraction of the antagonists counters their subsequent inhibitory effect, which as we already know, will facilitate the action of the prime movers and synergists. Caiozzo et al. have even concluded that "a strength training program that employs the pre-contraction technique is more effective for increasing low-velocity strength than only training the prime movers."

Again, using the bench press as an example, this is relatively easy to do. While the bar is still racked, take your bench press grip and pull down as hard as you can, trying to bring the bar to you. Brace yourself so that you won't leave the bench. This will result in a maximal static contraction of the antagonist muscles of the bench press. Hold that contraction for six seconds, relax for five to ten seconds, then proceed with your bench press set.

This principle is quite simple. Irradiation means tension present in a muscle will "spill over" to nearby muscles. Furthermore, by "bracing" your body (thus creating more stability for pressing), you increase force production.

The more stable your body is, the more force you can produce. As the saying goes, you can't shoot a cannon from a canoe – it'll tip over! Even if you have a very powerful cannon, you won't be able to use that power. That's one of the reasons why I don't like Swiss balls for strength training. The prime movers simply can't produce maximum force so the training effect will be smaller.

To take advantage of this phenomenon while benching, I recommend a simple procedure:

1. Grip the bar as hard as possible.

2. Try to rip the bar apart (exerting static strength toward the outside with both arms).

3. Keep the glutes tightly contracted during the bench press.

4. "Screw" your feet into the ground.

These three tricks – antagonist stretch, antagonist pre-contraction, irradiation/stable base – will allow you to make better use of the potential strength of your muscles, but they aren't miracle techniques. In fact, at first they might feel weird and may even decrease your performance initially, but once you get used to them your bench press strength will be vastly improved!

What we want to accomplish in the long run is an increase in the safeguards' activation threshold. This will allow us to exert much more force before we're shut down by our central nervous system. Increasing the threshold can increase your strength potential by 10 to 20%!

Plyometrics and the shock method are currently used for lower-body power development. This includes depth jumps, loaded jumps, and landing from various heights. However, very few people use the same methods for the upper body. I've found that such drills can be very effective at improving bench-pressing strength. The two drills I use are the ballistic bench press and iso-ballistic push-up.

This is the only exercise in which I consider using the Smith machine effective. The objective is to lower the bar to the chest, throw the load in the air, then catch it and start again. The load you use should be light, because the goal is not to just be explosive, but to be ballistic.

This drill is the upper body equivalent of the depth jump. The goal is to drop down into a push-up, project yourself in the air, land with the arms slightly bent and hold the position for fifteen seconds. This constitutes one rep. Ideally you want to do 3-6 reps per set for 3-4 sets.

There's an obvious reason why powerlifters and Olympic lifters are strong: they lift big weights in training! High reps and high-volume training are good if all you want is muscle mass, but to develop maximal strength you must pay your dues under some heavy barbells! This is commonly referred to as the "maximum effort method" and it calls for loads of 90 to 100% and low reps.

The objective of these exercises is to get you used to holding very heavy weights at arms length. By holding supra-maximal weights, you condition your nervous system and motor reflexes to accept this high form of loading and muscular tension.

The reason behind this is that you have an inhibitory reflex which is the "gift" of the Golgi Tendon Organ (GTO). When muscle tension is very high, it tells your muscles to stop producing force. This is a protective mechanism, but in most individuals it's set too conservatively and can impair your lifting prowess. Reduced inhibition is one of the reasons you see some small individuals handling big weights.

For static holds you simply un-rack (with a partner) a load that's greater than your maximum and hold the load in the lock-out position for a certain period of time. Partials are another variation since they allow you to use more reps than a full range of motion exercise.

Obviously these long term methods are quite hard on the system. For that reason their use is to be limited to a small volume of work performed once per week (preferably on Monday when the nervous system is fresh from the weekend's rest). Start conservatively and add volume and load from there.

On the other hand, the short term tricks can and should be used at every bench press session. The more you practice these techniques, the more you'll benefit from them.

Now get those soldiers working for you and go to war!

Even if your diet is perfect, sometimes fat loss just comes to a halt. Why? Because you're overlooking one crucial thing in your training. Here it is.
Fat Loss Training, Metabolic Conditioning, Metcon, Training
Dan John July 1

A program built around the three powerlifts that will make you 15% stronger and 7 pounds bigger in just 9 weeks.
Bodybuilding, Training
Christian Thibaudeau August 6

Eight more ways to protect your shoulders so you can keep lifting hard and heavy. Check ‘em out.
It Hurts Fix It, Shoulders, Training
Eric Cressey May 10 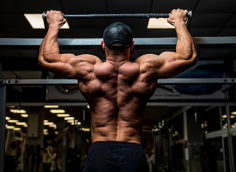