You Got It, But You Ain't Using It

"What the hell does that mean?" asked Christian Thibaudeau.

"It's from a movie," I say, snapping out of my daze. Thibaudeau is on the other line and probably thinks I've gone insane. "Anyway, I'm thinking of what you told me and for some reason that seemed relevant."

What Thibaudeau just explained to me was this: most guys have a decent number of fast-twitch muscle fibers — you know, the ones responsible for building tremendous muscle size and strength — that are currently being wasted because they haven't been activated. So most guys have the capability to build some serious muscle and strength, but they're simply not using all of their assets. They've got it, but they're not doing a damn thing with it.

So why are these guys only recruiting a smidgen of their muscle fibers? Blame traditional training and lack of emphasis on the nervous system.

When Your Muscle Won't Grow

"When you have problems making a muscle grow it's usually one of two things," says Thibaudeau. "Either the stubborn muscle has a low ratio of fast-twitch fibers or you're just not good at activating the fibers you have."

So if your chest is comprised of 60 percent fast-twitch fibers but you can only stimulate 20 percent of those through training, you're really limiting how big that muscle can grow.

"If you can effectively prime the nervous system at the beginning of your training session, you can activate those dormant fibers," says Thibaudeau. "One of the best ways to prime the nervous system is with ballistic movements and speed work, although most guys — especially bodybuilders — aren't doing them. These guys lack power relative to their muscle mass and it's really limiting their gains."

But Wait! I Do Speed Benches and Squats!

Good for you. Too bad you're training to be slower.

"Regular strength training forces us to start decelerating the bar before we hit the end of the concentric range of motion," says Eric Cressey.

While this protective mechanism keeps us from hurting our joints, it also keeps us from achieving the maximal acceleration and power that's needed to really activate the fast-twitch fibers.

"The more speed you produce at the bottom of the movement, the more your body will 'shut off' at the top of the movement," says Thibaudeau. "So while you're trying to develop power your body is learning to slow down right when you need the most speed."

Imagine a quarterback trying to throw a long pass without letting go of it and you quickly see why "top-end power" is important.

So how can you override your body's natural instincts and start hitting those pesky fast-twitch fibers? Simple. Catch some air.

"Projecting resistance into the air — whether it's a bar during a bench press throw or your body during a plyometric pushup — saves the joints and teaches you to accelerate all the way through the movement," says Thibaudeau. "It's one of the best ways to build power, prime the nervous system, and activate the fast-twitch fibers."

"And I've actually seen a form of bar throwing performed by many athletes. In fact, Alexeyev himself used what he called "snatch throws" in which he'd throw the bar for height, kinda like strongmen and highland game athletes who throw objects for height."

Thibaudeau also has some firsthand experience. When he first got into bodybuilding, he trained like an Olympic lifter and worked on ballistic movements eight months out of the year, only switching to a more traditional bodybuilding routine during the last four months.

"I grew more muscle in those four months than most people grew in a year," he says. "And it wasn't because I was untrained — I was hitting the gym six days per week. It's because I trained my nervous system so effectively that it was super easy for the muscles to grow once I switched to the bodybuilding program."

And besides increased muscle mass, Thibaudeau credits using ballistic movements for helping him boost his strength in the main moneymaker exercises.

Movements per day: One. Preferably done on a day where you're training that same muscle group.

Sets and reps per exercise: 25 or less total reps. Thibaudeau recommends 5x5 or 8x3. Doing more than five reps in a single will result in a noticeable loss of power and isn't advised.

Rest: Although there is no set guideline for rest periods — when asked, Thibaudeau jokingly told me 47.3 seconds — he recommends taking as short of a break as possible without having a decrease in performance. That should be around 15 to 30 seconds for most guys, although some may need closer to a minute or more.

The Bench Press Throw aka The Suicide Bar

Nothing sounds more hardcore than getting under a bar and throwing it as hard as you can. But that still doesn't mean it's a great idea for everyone. "To be honest, I've only ever used it in the research world when we had a specialized power rack on gliders and a spotter on each side of the bar," says Cressey. "I haven't done it since."

Thibaudeau used a similar contraption years ago. "It had a good feeling, like throwing dead weight," he says. " "I once saw Adam Archuletta perform bench press throws," he adds, "but he was using a contraption similar to a Smith machine. I hate the Smith machine, but I believe this is one instance in which it might actually be useful."

But now, most Smith machines have a counter-weight and too many J-hooks. "It completely screws up the throw," he says.

If your gym still has an older Smith machine and you want to try the bench throw, simply set up like you would on a normal bench press. Lower the weight under control, quickly reverse the motion, and toss the bar into the air as hard as you can. But be ready to catch the sucker on the way down unless you want to get decapitated.

Likewise, Hammer makes a plate-loaded machine that's perfect for throwing the "bar" (or handles) into the air.

Thibaudeau recommends using a weight that's about 20 percent of your maximum effort. So if you bench 300 pounds you'd use 60 pounds for the bench throws. 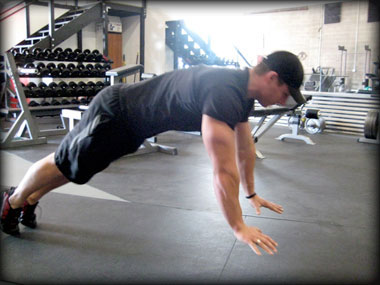 For those of you who'd rather not suffer death by barbell, both Thibaudeau and Cressey recommend doing a plyometric pushup to activate the fast-twitch fibers in your chest, shoulders, and triceps.

And for your information, a push-up is not a pussy exercise.

"Plyo pushups aren't sexy because we all did them as kids in gym class," says Thibaudeau. "But they're incredibly effective. A 200-pound guy has to project around 60 to 70 percent of his body into the air. That's like doing a bench throw with 120 pounds."

To do a plyo pushup, assume the normal push-up position with your feet together and your hands shoulder-width apart. Lower yourself under control and forcefully push yourself up so that your hands leave the ground. Be ready to absorb the shock once you land, by going straight into another push-up.

And don't even think about clapping in the air.

"Most people delude themselves and think they're explosive because they can clap their hands together," says Thibaudeau. "Big deal. If you can't get your palms six to eight inches off the ground, then you're not being explosive. You need to put your hands on a bench and do the push-ups from an incline position instead." 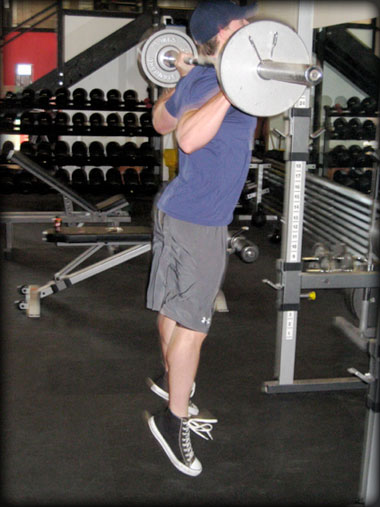 The jump squat is king when it comes to building explosive power in your legs and priming your lower body for growth. Just don't get caught going too heavy.

"A guy who's new to ballistic training should really only add about 20 percent of his bodyweight to the bar on the jump squat," says Thibaudeau. "A more advanced guy could use upward of 30 percent of his one-rep max on the squat, but that's the limit. Anything else is counterproductive."

And just like the plyometric push-up, you can't delude yourself into thinking you're getting serious air just because your feet leave the ground.

Here's a tip: have your training partner look at your waist as you jump to see if you're maintaining your height through all of the reps.

"Looking at the feet is stupid because you can bend at the knee," says Thibaudeau. "But the waist doesn't lie."

To do it, load up the bar and set up like you normally would for a back squat. Descend into the squat and explosively jump into the air as high as you can. Like the plyo pushup, you want to make sure you absorb the shock of the landing by immediately descending into another squat once your feet hit the ground. 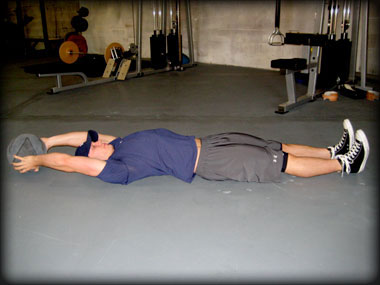 The traditional overhead medicine ball slam is a great conditioning tool for athletes because it really brings the abdominals into play. But for the bodybuilder who's trying to only activate his lats, it's not the best option.

That's why Thibaudeau came up with this alternative.

To do it, lie on your back in a straight line with your arms outstretched and a heavy medicine ball in your hands. Forcefully contract your lats and throw the ball over your toes as hard as and as far as you can.

Now stand up and go fetch the ball like a good boy and get ready to do it again.

Feel the Pain. Or Not.

One of the costliest mistakes guys can make is to view ballistic training like regular strength training.

"You don't want to 'feel the burn' or have to grind out reps," says Thibaudeau. "Quality is much more important than quantity here. It's very important you don't feel burnt out."

In fact, you should feel more energetic after a set of ballistic movements than when you first walked into the gym.

And what about taking too much time between sets, especially on the dead man medicine ball throws?

"The nervous system stays activated for up to three minutes after a maximum contraction. You're not going to lose the effect by getting up and walking after a ball," says Thibaudeau.

Remember: the point isn't to fatigue yourself by making the ballistic exercises into conditioning movements. It's to prime the nervous system and activate the fast-twitch muscle fibers so you can get stronger and gain more muscle.

How to Use Ballistic Training

If you're a bodybuilder who's looking to activate your fast-twitch motor units to encourage more growth, Thibaudeau recommends performing contrast sets.

Simply pick a ballistic exercise — a plyometric pushup, for instance — and do a set of three to five reps. This primes the nervous system. Rest 15 to 30 seconds and immediately go into a bodybuilding movement like a flat dumbbell bench press for four to six heavy reps. Keep going back and forth until you hit all of your reps for the ballistic exercise.

If you're more focused on pure performance, you can also use ballistic training at the beginning of the workout like Cressey recommends. Simply pick one ballistic exercise and do all of your sets after your warm-up but before you move on to your main workout for the day.

Get Ballistic and Build Some Muscle

If you've got it then you owe it to yourself to use it. Add some ballistic exercises to your workout today and wake up those lazy fast-twitch fibers.

We all fall into one of these two categories. Knowing your type will help keep you motivated. Check it out.
Tips, Training
Christian Thibaudeau November 18

Is the compulsion to get bigger and leaner a disorder? Here’s the real story.
Bodybuilding, Training
James Heathers September 29 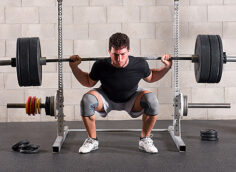 Which one is best for your goals and body type? Find out here.
Christian Thibaudeau May 10