Our jaws almost hit the floor when the petite girl walked into the gym and challenged everyone there, including myself, to a chin-up contest. Not only was our very masculinity at stake, but she also bet us each ten American dollars that she could do more supinated chins than we could do pronated. Ten US dollars is a lot of money on the Russian black market, but we figured that it was good for a laugh and took the bet.

Out of the men, I did the most – 23 super-strict, narrow pronated chins. However, I soon parted with ten bucks and a little of my self-esteem as this woman grabbed the bar and performed 60 perfect reps. The worst part was that she didn't even reach muscular failure. Apparently, she just became bored at 60 reps and dropped from the bar. I later found out that we'd been beaten by a swimmer who placed tenth in the Moscow Championships.

Despite this blow to my ego, I still believe that chin-ups and pull-ups are the upper body mass builders. If you believe that the squat is the king of leg exercises, then you probably wouldn't waste your time doing endless sets of abductor machines, leg extensions, or (gasp!) the near-useless Smith machine, right? Well, the chin-up and its variations should be considered an "upper body squat" because of its mass-building qualities and its ability to quickly increase functional strength.

In fact, most bodybuilders would be jealous of the back development of top-level gymnasts and kayakers. Their conditioning programs center around (you guessed it) chin-ups. Many elite organizations like Special Forces units and SWAT teams require a certain number of chins to be performed before a candidate can get into their programs. This is because, unlike the geeky pull-down machine, chins are a true test of real-world strength.

Why are pulldowns a dork exercises? Simple. In pulldowns, you move a free-moving object (the bar) around you. It's easier to use your lower back and momentum to pull the weight. "Easier" is never the best way to build strength and musculature. With chins, you have to move your body around a fixed object (the bar), insuring an overload on the back and the muscles of the upper arms. This movement is more realistic and has a much better transference to sports performance. As a bonus, the close-grip chin will also add size to your biceps.

I also don't like those Gravitron-type machines in which counterweights are used to offset your bodyweight. I believe that the stabilizer muscles are taken out of the movements, setting you up for poor performance and maybe even injury. Machines like this and pulldowns are okay for variety, but the core of your back training should revolve around the chin-up.

In my seminars, people often ask me about rows. Sure, the barbell row is a good exercise, but seeing someone perform it correctly is as rare as Weider coming up with an original idea. We'll save a barbell row lesson for another article. First, let's get some basics out of the way, and then I'll show you how to progress from zero to hero in the chin-up.

Just to make sure that we're on the same page here, the difference between a chin-up and a pull-up is the grip. Incidentally, the pull-up is a type of chin-up, technically. So when I talk about chins, I often mean pull-ups, too.

Always lower your body down to a full extension – none of that half-rep junk. As for breathing, you should inhale when you start the exercise and exhale as you begin the decent. Never use straps, though. They could easily become a crutch and will take away from your forearms and grip strength. You don't want grip strength to be a limiting factor in real life. I've never been involved in a judo or wrestling match in which the other athlete says, "Hey, man, can you wait a minute while I wrap this strap around your wrist?

With most styles of the chin-up, you can use the basic progression that I'm about to describe. First, let's say that you can't do a single rep by yourself because of weakness, heavy bodyweight, a combination of both, or you're a Mike Mentzer disciple. Instead of resorting to a dork machine, simply perform several eccentric-only reps. In other words, stand on a bench or jump up so that your chin is over the bar. Now, lower yourself in a slow and controlled manner.

For an eccentric-only routine, do four sets of one eccentric rep in which each negative lasts for 30 seconds. Once you get the hang of that, try stopping the movement on the way down. Begin with your chin above the bar, lower yourself slowly until you're 1/3 of the way down, and stop. Hold this position for eight seconds.

Sometimes, I have my athletes lower themselves for 30 seconds on the last rep of each regular set. Another variation is to pause isometrically on the way up. If you're shaking like you have Parkinson's disease, you'll know that you're doing it right.

Next comes the use of a good spotter. In the first spotter-assisted progression, your partner will support you by holding on to your ankles. If needed, you may then push off his base of support for extra assistance. Once you can perform 12 reps in this style with minimal assistance, you're ready for phase two.

In the second progression, your partner will only hold on to one ankle. The extra weight of the free leg will increase the overload on the lats. Once you can get 12 reps without much help, move on to the next phase.

In this third progression, your spotter will hold you at the waist. As you get stronger, you'll find that you require assistance only in certain parts of the exercise. At these sticking points, your buddy should only provide enough assistance to help you clear the bar. Soon, you'll be knocking out strict reps with no help.

But don't rest on your laurels. Next, increase the overload by one of the following methods:

With the above progression, I was able to increase the women's Canadian National ski team's average number of chin-ups from zero to 12 reps in 11 weeks. They could also perform reps holding a 35-pound dumbbell with their feet.

Once you get past basic wide-grip pull-ups and medium-grip chin-ups, it's time to shake things up a bit.

The gymnast's extended-set back routine) This routine has gained a lot of popularity since it was originally published in my "Poliquin Principles" book back in 1997. Many athletes and bodybuilders who claim that they can never really "feel" their lats will be "feeling" them for several days after this program.

I must warn you that this is an advanced routine. You need to be able to perform at least 12 shoulder-width supinated chins in strict form before you tackle this bad boy:

I consider sternum chins to be the undisputed king of compound exercises for the upper back. Popularized by Vince Gironda, this chin-up requires you to hold your torso in a layback posture throughout the entire movement.

As you pull yourself to the bar, extend your head back as far away from the bar as possible and arch your spine. Toward the end of the movement, your hips and legs will be at about a 45-degree angle to the floor. Keep pulling until your collarbone passes the bar, your lower sternum makes contact with the bar, and your head is parallel to the floor. You can use either a supinated or a pronated grip. Change the width of your grip for variety.

Not only does this create a great overload on the scapulae retractors, it works more than just the lats. The beginning of the movement is more like a classical chin, the midrange resembles the pullover motion, and the end position duplicates the finishing motion of a rowing movement. If you're advanced enough to even attempt this routine, then you should make sternum chin-ups the staple of your back program.

Here's a chin-up variation that you don't see much. Get into a wide-grip pull-up position. The hands should be placed a little wider than the shoulders.

Instead of pulling yourself straight up, pull toward one hand at a time. I tell my athletes to "kiss" their wrists. This is a favorite among judokas and wrestlers.

These aren't just a "show off" exercise, but one of the most advanced forms of the chin-up. Before attempting the one-armed chin, though, first become competent in the standard mixed-grip chin. This is another exercise that you don't see very often.

In the mixed-grip variation, you'll place the hands about shoulder-width apart, but with one hand pronated and the other supinated. The side using the supinated grip is going to get the greatest portion of the load. Make sure to perform an equal amount of work for both arms by reversing the grips on each alternating set. The stronger you are, the wider a grip you should use.

Once your master the mixed-grip chin, you're ready to work toward doing a legitimate one-armed chin. Place one hand on a chin bar and the free hand on a rope that's hanging from the chin bar (for support). As you continue to get stronger, you'll be able to place your hand lower and lower on the rope.

Now, it's tough to impress me in the gym (unless you're a smart-ass Russian breaststroker), but I once saw a mountain climber perform several one-armed chins while holding a 45-pound plate across his chest. Needless to say, his upper body was huge.

Once you're chinning with Tarzan-like upper body strength, there's one more way to increase the overload. Simply take all of the above exercises and perform them using a thick (two to two-and-a-half inches) bar. The outside poles of monkey bars at the local playground work well, but wrapping a towel or piece of foam around your usual bar will do the trick for most people.

Just as in training with thick-grip barbells and dumbbells, chinning with a fat bar recruits more muscle fibers, leading to faster strength gains. After a few weeks of thick-grip training, you'll notice a 10-12% increase in strength when you return to using a bar of regular diameter. Also, expect to add some size to your forearms.

The End of Geek Training

I've given you just a taste of the endless variations of the chin-up. By changing the grip, tempo, and resistance, you should never have to rely on "geek" machines again for back training. Once you see your size and strength gains hit the roof, you'll never want to go back, anyway.

Q & A with one of the world's premier strength coaches.
Powerlifting & Strength, Question of Strength, Training
Charles Poliquin January 5 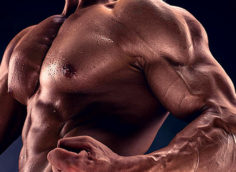 If you're a natural lifter doing the workouts of drugged lifters, you're going to be disappointed. Build maximal strength the natural way. Here's how.
Powerlifting & Strength, Training
Christian Thibaudeau November 22
This is when the old saying, "necessity is the mother of invention" comes into play.
Training
TC Luoma September 20