Abdominal Court is now in Session

It's sad really, because everyone wants rock-hard abs. But when they try to learn how to get them, they're drowned in a sea of contradiction that makes progress difficult. In this article, we'll examine both sides of popular ab training arguments and I'll give you the verdict on who's right and who's dead wrong. Court is in session!

These individuals make the argument that abdominals, being postural muscles, are predominantly slow twitch. As a result, they'd be better suited for work of long duration at a low intensity.

High rep proponents also argue that since the ab muscles are activated almost all day long, they're built to handle a lot of training volume. Most of the time they recommend performing unloaded (non-weighted) sets of basic ab exercises, generally doing at least 15 reps per set and sometimes up to 50-plus reps.

According to this school of thought, muscle tissue is muscle tissue. The abs are no different than any other muscle group in the body and should be trained accordingly.

This group sneers at the supposed slow twitch dominance of the abs, arguing that even slow twitch fibers have the potential to hypertrophy and should still be trained in a hypertrophy-friendly zone. Their recommendation is to train the abs just like any other muscle group: if you want more abdominal definition you must hypertrophy them, and that requires work in the 6-12 rep range with added resistance.

Both camps have valid arguments. It's true that muscle tissue is muscle tissue and if you want to hypertrophy your abs, you must respect the overload principle. At some point that'll require using added resistance.

A lot of people cringe when they hear "abdominal" and "hypertrophy" in the same sentence: they think that this necessarily means making their waist thick and blocky. Not so! In fact, if you want maximum abdominal definition, you must hypertrophy them! That's what will cause the contrast between the muscle bellies and the linea alba, which will give you that six-pack look.

On the other hand, EMG research has shown that unloaded exercises such as the crunch, reverse crunch, V-sit, and crunch with a twist all activate the ab muscles to at least 60% of their maximum capacity, with a high point of 75% for some exercises. This is a sufficient hypertrophy threshold for beginners and even for intermediate trainees.

One last point is that some people have dysfunctional abdominals. As a result they have a tendency to switch the bulk of the workload to the psoas and rectus femoris, taking away from the abs. Using added resistance will only compound the problem as the body will be even more prone to resort to the more powerful hip flexors.

Individuals with dysfunctional abs should start with unloaded abdominal work performed at a slow tempo, focusing on contracting their abs maximally. (Touch training, or touching the abdominal muscles as they contract, can also be of great help.)

Because of this, you should use exercises for all of these functions: use trunk flexion exercises (e.g. crunches) for the rectus, trunk flexion with a rotation (e.g. Russian twist, twisting crunch) for the obliques, and the vacuum/tummy tuck for the transverses abdominis. Not only that, but diversity advocates contend that the lower and upper portions of the rectus abdominis are recruited separately and thus demand the use of different exercises (e.g. reverse crunches or leg raises for the lower portion).

These people contend that you don't need to use a wide variety of ab exercises, only the most basic drills, like crunches and cables crunches, to activate all the abdominal muscles.

This is supported by recent EMG research by Willett et al. (2001) who found that the crunch, reverse crunch, V-sit (double crunch) and twisting crunch all recruited the three abdominal structures (rectus, obliques, transverses) above 60% of their maximum contractile capacity.

Generalists further their argument by saying that if one performs basic lifts while standing up (deadlift, squats, Olympic lifts), the abs (especially the spine stabilizers such as the obliques and transverses) already receive a lot of stimulation and thus don't require a lot of additional work. So, according to them, there isn't a need to seek the "optimal" ab exercise because such a thing doesn't exist: stay basic and use ground-based lifting and you'll be fine.

One again, both camps present very interesting cases. While it's true that all ab exercises will recruit every abdominal muscle to some extent, the fact remains that different exercises emphasise different regions.

The aforementioned study by Willett found that, not surprisingly, the reverse crunch produced the greatest muscle activity in the low portion of the rectus abdominis, with the V-sit or double crunch coming in a close second. The same study didn't find any difference in the muscle activity of the upper region of the "six-pack" between a crunch, reverse crunch, double crunch or twisting crunch.

The study by Willett brings us another surprise because they found that the greatest obliques activation is seen in a reverse crunch and a double crunch, not a twisting crunch! This goes against what most people have always believed.

Also note that during a reverse crunch, the abs are activated mostly during the last portion of the range of motion. In the beginning, the psoas does most of the work. So if you want to focus on your abs you might want to perform only that last portion of the exercise (from legs perpendicular to the floor to the chest).

After reviewing this info, my verdict is that you should use several different abdominal exercises, but without overdoing it. Furthermore, it's important to understand that exercise variation will have as much to do with keeping interest up as it has with stimulating the different muscle groups. Using three exercises in a session is more than adequate: one crunch variation, one reverse crunch or double crunch variation, one exercise using a twisting motion.

These guys are also advocates of the high rep school of ab training. Their arguments are basically the same: the abs are postural muscles and thus are predominantly slow twitch and are used to being activated for a long period of time. As a result they can and should be trained often. Training them everyday is a common recommendation for this group, however 4-5 times per week seems to be the norm.

This group can be linked to the advocates of high load ab training. They argue that since the best way to train the abs is to train them just like any other muscle group, a frequency of 1-2 times per week is optimal when training for hypertrophy. Since they believe in using more intensity (heavier weights) they reason that their ab muscles will need more time to recover from the higher amount of micro-trauma.

While we established earlier that loaded abdominal work in the hypertrophy zone should be part of your ab training program, this doesn't necessarily mean that we should adhere to the exact same parameters as we use when planning the training of other muscles groups.

For one thing, the force production potential of the abs is lower than that of most muscle groups and they're less prone to suffering from a high amount of micro-trauma. Furthermore, the relatively short range of motion of most ab exercises means that the amount of work performed (work = force x distance) will be low. As a result, the ab muscles can be trained more often than most muscle groups even if loaded exercises are used. A frequency of 2-3 times per week is optimal in most cases.

It's well established in the literature that the TA acts as a trunk/spine stabilizer. In fact, a direct relationship exists between TA activation and intra-abdominal pressure (Cresswell et al. 1994). It's also been shown that during unexpected movements of the body (due to external factors), the TA is the first muscle to be activated, indicating that the body uses it to stabilize the spine when faced with a sudden motion.

So, our tummy-tuck group argues that you should train this muscle as it'll increase trunk stability and make an athlete better at resisting outsides forces. Their exercise of choice is the vacuum/tummy-tuck but some also like training on unstable surfaces to increase TA activation.

Frank Zane performs a vacuum pose. Think Ronnie Coleman could do that?

The Defendants – The Traditionalists

While it's true and established that the TA is an important trunk stabilizer, this group is quick to point out that TA activation occurs in any movement involving the body (especially when performed from a standing position). Simply moving the arms around leads to some TA activation.

So in that regard, any strength training exercises will train the TA. This is especially true of exercises such as the squat, deadlift and Olympic lifts. Furthermore, our traditionalists contend that specific TA exercises such as the vacuum have a limited strengthening potential because you can't increase the amount of resistance on these exercises. So while there might be an initial gain in TA strength when first performing this exercise, it soon becomes ineffective.

On the other hand, if you use the squat and deadlift regularly and progress on these exercises occurs, the stress imposed on the TA can only go up. So in that regard, heavy ground-based exercises are better than TA-specific exercises to increase TA strength.

The traditionalists bring some very good points and I tend to agree with them. There's no doubt that the strengthening potential of TA-specific exercises is very low compared to ground-based exercises. So in most cases, I'd award the case to the traditionalists.

However, in some cases there might be some validity in performing the vacuum/tummy-tuck exercise – those who have problems recruiting their TA for example. These individuals are normally plagued by lower back problems, have trouble performing a technically correct squat, and most of the time they're office workers. In their case, a TA-specific exercise might be good to improve the capacity of their CNS to activate their TA. But once this problem is solved, vacuums will have little effect.

Abdominal court is now adjourned. Hopefully you'll be able to weigh the pros and cons of each case and form your own opinion. I think that I pointed you in the right direction, but it's up to you to digest all of this and come up with your own verdict!

Circus trick or testament to full-body strength? Either way, it sure looks cool. Here's how to nail this movement in record time.
Abs, Challenge Training, Metcon, Training
Al Kavadlo February 3

Here's why you need to be doing the power clean.
Tips, Training
Glenn Pendlay February 28 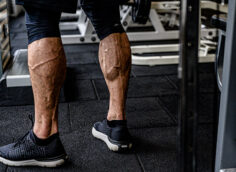 Your genetics might stink, but there's still a way to gain size and look impressive in shorts. Follow these rules.
Andrew Coates September 8