In Part I of this article, I carefully picked out seven of Charles Poliquin's principles and tried to make them a little easier to understand. Of course, as I mentioned, picking out only seven was a little like trying to pick my top seven favorite Hanson songs?okay, bad analogy. Trying to pick seven was like trying to choose which seven of my family or friends would get to go into the shelter with me when one of those Hollywood-movie asteroids blows up my town. Should I pick my dear, dear, grandmother, or that girl walking by who I've never met but who has a perfectly glorious rack? Anyhow, I made my choices based partly on cold logic and partly on emotion, picking some that worked particularly well for me or that suited my personality.

Hopefully, I made some of them easier to understand, especially if you're new to Charles Poliquin's ideas. Regardless of how well I explained them, though, they're essentially worthless unless they can be incorporated into a workable routine.

In the beginning, I practically had to book some time on a Craig Supercomputer to help me figure out a Poliquin workout for myself. I mean, geez, with all the other things I had to factor in like speed of contraction and muscle fiber types, etc., etc., I was lucky if I didn't get confused and mistakenly devise an elaborate tap-dance routine: De Camptown Ladies sing this song, oh da-doo-da-dey?.

Anyhow, I eventually got pretty good at it, but I found that I'm a little too goal-oriented and compulsive and I found that a completely pre-planned workout was causing me too much anxiety. I looked at the whole thing as a checklist and I couldn't relax and enjoy myself until I had methodically gone through the whole thing. It felt too much?like work.

So, I adapted. I devised a system using the Poliquin principles listed above and made a workout that had some structure, but was variable enough to suit my personality.

*I don't work shoulders directly I know that sounds nuts, but I think that anyone who habitually works chest and back is already getting plenty of shoulder work. My aim is to keep my shoulders healthy so that when I'm eighty, I can still throw lumps of stale bread at the pigeons that congregate around my park bench.

As I mentioned, I don't do well with set-in-stone structure. I need a little leeway to do what I want to do occasionally, or to have another choice or two in case the machine or weight I want is being used by some yutz who's telling his entire life story to his personal trainer in-between sets.

Therefore, I combine structure and spontaneity. Before I go into the gym, I've mapped out the first exercise (using the appropriate Poliquin Principles) for each body part I'm going to work that day and only the first exercise. As an example, the "written-down" portion of my chest and back workout will look like this:

**With chins, I'd strap some additional weight onto my waist.

Again, these are the only two exercises that are set in stone for this particular workout. More on that later, but let's take a look at the parts of this exercise prescription and see which principles they employ:

The exercises themselves: Note the "A1" and "A2" designation? For you Poliquin neophytes, that simply means I'll do one set of the A1 exercise (the incline presses), rest two minutes, and then go on to the A2 exercise (the chins). I'll rest for another two minutes and then go on to the second set of the A2 exercise. This incorporates the "Yin and Yang" principle explained in Part I of this article which, in a nutshell, says that you experience better recuperation when you do another set for the antagonistic body part in-between sets. So, you might consider pairing chest and back; biceps and triceps; and quads and hams.

Reps: Sets of relatively low reps target the type IIB muscle fibers, and these are the fibers that have the least endurance. Therefore, I do these low-rep sets early in the workout while these particular muscle fiber types are still fresh (the "IIB or not IIB" principle).

Tempo: Note the 402 tempo indicated in my example workout. This tells me that I should take 4 seconds to lower the weight, no pause, followed by a 2-second concentric or lifting phase. By doing these slow, controlled reps, I'll ensure that my time under tension will be close to 30 seconds, which again suits these muscle fibers best (the "time under tension" principle, and the "change the beat around" principle).

Rest: Again, different muscle fiber types respond better to different rest periods, and type IIB fibers which are being targeted here in my first group of exercises respond better to longer rest periods. It may be difficult for traditional muscle builders to wait this long between sets, but it's the absolute correct thing to do if you're after additional strength and size.

Now, I'll record my weights and reps achieved for this workout, and I'll continue to do so for the next five workouts. Remember the "Borg Principle," the one that says your body becomes "hard-wired" to a particular routine? Well, it's true, and you really shouldn't do the same exercise or group of exercises more than 6 times in a row. After that sixth workout, I'll pick two new movements for chest and back. For instance, my "A1" movement might even be dips, doing 4 sets of one rep each, with a tempo of 15015 (that's right, 15 seconds on the way up and 15 seconds on the way down). Likewise, my "A2" movement might be close-grip chins for a 15015 tempo.

You're probably wondering why I record these first two exercises and no others. Well, as mentioned, the completely structured, completely-planned-beforehand workout doesn't work with me, mentally. I find myself thinking about the next set while I'm still doing the current one. But, by keeping careful records of the first movement for each body part, I can determine if my workouts continue to be effective. For instance, if I fail to either increase the weight or the reps on each subsequent workout, I know I'm not hitting it hard enough on the subsequent movements.

You, however, may prefer a lot of structure. If that's the case, simply write out your entire program beforehand using Chuck's principles. Just make sure you change your program after every 6th workout or so (that's every 6 workouts for that particular body part or parts).

Let me reiterate that the above exercise combo isn't my entire chest and back workout. Hardly. But after this, I free-wheel it, doing a combination of exercises that employ the Poliquin Principles but change constantly from workout to workout. This keeps me amazingly fresh (mentally) and allows me to keep making far more progress than I might have had I stuck to a completely pre-determined workout.

For instance, after I've done these first two low-rep exercises, I'll want to do some mid-range rep training (approximately 8-10). Consequently, I'll often do two exercises that:

A) Work the muscle slightly differently, i.e., flat-bench dumbbell presses instead of incline barbell presses, and bent-over rows instead of chin-ups.

B) Incorporate a slightly faster tempo. Since I'm doing 8 to 10 reps, I don't want to do incredibly slow reps because that will bring my total time-under-tension beyond the 30-70 second range I've established for myself. Consequently, my tempo will probably be about 202 or somewhere in that range.

Okay, so we've done a few sets in the low-rep range and the middle-rep range. That means that a good portion of your total number of muscle fibers have been recruited and put to work. That leaves your slow-twitch fibers. They've barely broken a sweat and they're laughing at all the low-endurance fibers that are gasping, wheezing, and massaging their bruised sarcomeres. Time to put these high-resistance fibers to work with some high-range rep training.

There are other options, too. I might, on occasion, do three sets of vertical bench presses (machine), doing a 6,6,6, rep-scheme where I do 6 reps to failure, wait 10 seconds, reduce the weight, do 6 more reps, wait ten seconds again, and reduce the weight and do a final 6 reps. After resting for 45 seconds to 60 seconds, I'd do the next set. In this just-mentioned scenario, I'm using heavier weights than I might for a straight-out set of 15-18, but I'm still fatiguing the high-threshold slow-twitch muscle fibers.

Obviously, there are as many exercise possibilities as there are walrus bones in the dumpster of an Eskimo diner, but the key is, at least for me, to employ as many of the Poliquin principles as I can in each workout. Rules, of course, are occasionally meant to be broken, and I don't always hold fast to every principle 100% of the time. The key to being successful in this and any endeavor is to be creative. Experiment, but keep the basics in mind. Deciding to use hedge clippers to remove an ingrown toenail certainly falls under the category of creative, but it just isn't going to work that well, is it? 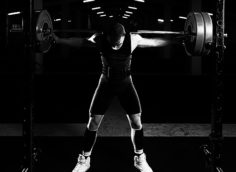 Want to blast out of the bottom of your squats? Yes you do. This variation will build that skill AND build your legs.
Training
TJ Kuster September 11
Biceps Exercises for the Genetically Challenged
Training
TC Luoma April 13

Did all that holiday snacking leave you stretching the seams on your Santa suit? Coach Chris Bathke has what you need to get back into fighting shape, fast.
Fat Loss Training, Metcon, Training
Chris Bathke January 4

Some people ditch the heavy weights and do tons of light reps when in a fat loss phase. That's a mistake. Here's why.
Tips, Training
Christian Thibaudeau March 18