If you've hit a plateau in muscle size, or your gains are just painfully slow, this new training method is guaranteed to get you growing again.

In short, you're going to squeeze the target muscle while it's under load (during a certain part of an exercise) for several seconds, then perform full range reps. After a very short rest, you'll do it two more times with shorter holds and fewer reps.

Let's go over the plan, then we'll break it down with exercise suggestions and talk about why it works so well.

Do the following 3-4 times per week for only one exercise that targets the muscle group you're trying to build. The weight remains constant for the entire sequence.

Explanation: It's optimal to pair the longest isometric contractions with the highest reps. You're frontloading the majority of the work when you have the most energy, and then the duration of the holds and reps drop to account for the accumulation of fatigue.

This technique is very demanding so avoid any other direct training to that muscle during the workout. It's essential to do these sets correctly in order to trigger hypertrophy.

This method can be used with any exercise. However, some moves require a little tweaking for optimal results.

Where you perform the isometric squeeze depends on the biomechanics of the exercise. For some exercises you'll squeeze the peak contraction in the top position, while for others you'll squeeze when the muscle is stretched in the bottom position.

The best exercises for each muscle group:

When to squeeze the calves: Top position when the heel is elevated.

Drive through your big toe with as much force as you can muster.

When to squeeze the quads: Bottom position when the back knee is slightly off the ground.

In the bottom position of the exercise, attempt to push the foot of your front (working) leg away from you as if you were performing a knee extension. This provides greater stimulation to the quads and minimizes co-contraction of the hamstrings.

When to squeeze the hamstrings: Top position when the torso is parallel to the ground.

Avoid arching your low back (lumbar lordosis) as you squeeze the hamstrings.

When to squeeze the glutes: Top position when the hips are fully extended.

Stretch your hip flexors before each set so you can achieve greater terminal hip extension.

When to squeeze the chest: Top position with the elbows just short of lockout.

Keep your abs and glutes braced; attempt to pull your hands together. The hands won't move but you'll feel the fire in your pecs.

Upper Back – Any Row or Pull-Up Variation

When to squeeze the upper back: At the top when your elbows are at peak flexion.

For the row or pull-up, focus on squeezing the shoulder blades back and down. Now, most lifters can't do a 5-3 Countdown for the pull-up, so work to become one of the elite few.

When to squeeze the delts: Top position where your arms are parallel to the ground.

When to squeeze the biceps: Top position when your elbows are at peak flexion.

At the top, attempt to pull your hands together to recruit more motor units in the biceps. The hands won't move but you'll feel an intense burn.

It's best to perform this exercise from a fixed bar that's set at waist height, either in a power rack or Smith machine. Rings or straps can work, but they're not optimal for the squeeze portion.

When to squeeze the triceps: Bottom position when the elbows are fully extended.

Twist the palms slightly outward (slight pronation) in the bottom position as you squeeze the triceps.

A strong band works really well for this exercise since the resistance of the band matches the strength curve of the move: the band provides its highest resistance at the position where you're strongest, and the least where you're naturally weakest.

When to squeeze the traps: Top position when the shoulders reach peak elevation.

Pull your shoulders up and back at an angle and keep your chin tucked to avoid neck strain.

Here's Why It Works

The key to developing a successful High Frequency Training (HFT) program is to find ways to spare the joints while still stimulating muscle growth.

That involves making the muscles produce more tension without resorting to heavy weights. Now, you might think that training with heavy loads will produce the most muscle activity, but that isn't the case.

If you attach electrodes to your biceps and perform an intense isometric contraction against an immovable object, it'll crank up the EMG activity more than anything else.

Based on this, I started pairing light-load training with intense isometric contractions, done in the way described above, and my athletes started gaining muscle in areas that hadn't grown in months.

How NOT to Do Isometrics

Muscle growth requires tension. Training with heavy loads that you can't lift for more than five reps will definitely provide the tension your muscles need, but doing that month after month can overwhelm your nervous system and beat up your joints.

Your muscles will never wear out, but your joints definitely will: unless you train smart.

Isometric training has gotten a bad rap over the decades. Sure, it helped some lifters build strength but it usually didn't lead to impressive muscle growth. Here's why:

They did isometrics at the wrong time.

In order to induce the highest muscle-building stimulus, you must do isometrics when your muscles aren't fatigued. That's when you can recruit the largest motor units that have the most growth potential.

Squeezing a muscle after performing 8 or 10 reps will only recruit the small motor units.

They held the isometric contraction too long.

Muscle growth not only requires tension, but it also requires sufficient volume. Performing only one set of an exercise for a muscle group won't trigger respectable growth because there's not enough volume, no matter how high the intensity is.

For optimal growth, perform at least three sets of an exercise when your muscles are capable of producing the highest tension.

If you hold an intense isometric contraction for 20 or 30 seconds, it creates too much fatigue and the muscle can't recover sufficiently to reproduce a high enough level of tension within the workout.

They didn't follow the isometric squeeze with full reps.

You should perform full range of motion reps immediately after you do an isometric contraction.

First, the intense isometric squeeze will recruit the largest motor units. Second, the squeeze potentiates the nervous system so you can stimulate more muscle fibers immediately after the squeeze, similar to what occurs with post-activation potentiation (PAP).

It's the combination of the squeeze followed by full reps that makes this muscle-builder so effective.

The 5-3 Countdown addresses and corrects all of these problems.

During the appropriate part of an exercise, squeeze the muscle as intensely as possible for 5 seconds, followed by 5 full range of motion reps.

Rest 10 seconds, and the squeeze for 4 seconds, followed by 4 reps.

Rest 10 seconds again, and then squeeze as hard as you can for 3 seconds, followed by 3 full range of motion reps.

Rest for 3 minutes and repeat, trying not to reduce the resistance, if possible. Do a total of three "sets."

The 5-3 Countdown can be used with any exercise. You can even experiment with slightly longer durations of the squeeze if your muscles grow from higher reps.

Muscles that often respond well to longer sets are the calves, quadriceps, and deltoids, so you might try a 10-8 Countdown with the standing lateral raise, for example. Regardless, limit your sets to three per workout with no other direct work to that muscle group.

The program is simple, the workouts are short, and the results are fantastic. The catch? It’s also brutally hard. Check it out.
Bodybuilding, Powerlifting & Strength, Training
Dan John August 3

Improve technique, get strong, and build your glutes and hams with this accessory exercise. Use 50-70 percent of 1RM.
Deadlift, Exercise Coaching, Tips
Bronwen Blunt June 22 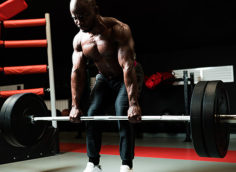