If you're anything like me, you're always interested in finding new, and more importantly, better ways of doing things. Well, climb aboard, that's precisely where we're headed.

So if you're currently performing cable exercises in your program, then read carefully. Because what you're about to learn will drastically improve your training.

A Quick Rant on "Research"

There's no opinion based or "one research study showed" material in this article. The information contained has long been proven by the science of physics and mathematics.

There's a huge difference between quoting research and stating that something has been proven by science. Even though research can be scientific, it doesn't mean that the end result will be repeatable. Just think about the many similar research studies that wind up showing drastically different outcomes. Remember, in order for something to be scientifically proven, it must be repeatable.

There's a principle of physics and vector mathematics called the Resolution of Forces. When understood and applied to resistance training, this concept can greatly improve your program.

Resolution of Forces is the method of resolving a vector into its components. Any vector which is directed at an angle to the customary coordinate axis can be considered to have two parts. Each part is being directed along one of the axe, either horizontally or vertically. The parts of the single vector are called components and describe the influence of that single vector in that given direction.

Think of a dog being pulled upon by a chain. If the chain is pulled upwards and to the right, then there's a tensional force acting upwards and rightwards upon the dog.

Taking It to the Gym

Let's take a look at two common exercises performed with a cable using a rope handle: The triceps extension and the face pull.

Even though both of these movements are very different, they do have something in common. They both require the exerciser to gradually spread the rope apart as the movement progresses. Whether you know it or not, this splitting of the rope drastically changes the exercise and the forces involved.

Let's use the triceps extension for example. When you use a straight cable bar, the force you exert from both arms is straight down. When you use a rope, things are very different. With the rope, you're no longer pushing straight down. You're now pushing at a diagonal. As we learned by Resolution of Forces, your effort of force is now divided into two parts. One part of your effort is pulling the rope down, while the other part is working to pull the rope apart.

It's important to note that the amount of force it takes to spread the rope apart is proportionate to the angle between each side. In other words, the force you have to put out gradually changes as your hands spread.

It would seem to be common sense that when holding each side of a rope, you're splitting the resistance in half, equally between both arms. Which would mean that if you put fifty pounds on the weight stack, each arm would be working against twenty-five pounds, right?

Take a look at what happens to the load as the movement progresses, and the ends of the rope are gradually split apart.

As you can clearly see from the above example, the force increases as the rope is gradually spread apart. At 30 degrees, it took an extra pound of force from each side. So now it takes fifty-two pounds of effort to move that fifty pounds. At 60 degrees of spread, it took four pounds of additional force from each side. Meaning it takes fifty-eight pounds of force to move the fifty pounds.

At 90 degrees, fifty pounds now feels like seventy pounds. This is a much bigger jump. Now you're exerting almost as much effort outward as you are downward. Finally, at 120 degrees of spread, it takes fifty pounds of effort from each hand. This means you're now exerting a hundred pounds of total force; twice as much as what's on the weight stack.

If you're reading this and thinking, "Isn't more force a good thing?" Keep in mind that the closer your muscles get to a full contraction, the less force they can exert. You're gradually getting weaker as the resistance is getting heavier. Not good!

This means that if you choose a weight that's correct at the beginning, you'll end up with a weight that's much too heavy at the end. Say hello to poor form, cheating, and increased joint stress.

As my father likes to say, "There are no problems, only solutions." So far, I've shown you the problem with using the traditional cable rope. I'm not the type of guy to leave you hanging, so now it's time to provide the solution. If you think I'm going to say stop using a rope and start using a cable bar, you couldn't be more wrong. A rope is always a better choice because it allows for freedom of movement.

So, are you ready?

Yes. It's really that simple. This is a small adjustment that makes for a big difference. It really doesn't matter which option you choose because both strategies achieve the same end result – longer rope ends.

I see you over there scratching your head, wondering how using a longer rope makes things better. Well, I'll tell ya'. Longer rope ends allow for more consistent force throughout the movement. The force is more consistent because the angle between ropes at the end range is greatly reduced. I could take the time to explain this mathematically, but halfway through, you'd already be off checking out the new Victoria Secret models.

Instead, we'll just go over a simple compare and contrast.

See how much the angle is reduced with a longer rope? The smaller the angle, the less the resistance increases.

The beauty of this solution is that you probably already have more than one rope at your facility. If you only have one rope and don't want to buy another one, you can make your own extra long rope very easily with some high quality rope from any nautical supply shop.

And for those of you who are lazy and don't want to buy or make anything at all, you're covered, too. Just perform the exercises unilaterally! This will ensure a more consistent resistance and eliminate the diverging force angles factor completely because there's nothing to separate from.

I've now shown you a very quick and easy solution to a problem you probably never knew you had. In doing so, I've exposed to you to some simplified mathematics that can, and should, be applied to improve many resistance training exercises.

If you ignore this new information and stick to the short rope, your shoulders won't explode, and your triceps won't fall off. However, if you're going to do it, do it right.

Most people shouldn't even try it. It's not for them. It very likely isn't for you. You can't handle it. Check it out anyway.
Bodybuilding, Powerlifting & Strength, Training
Charles Poliquin June 11

The best exercises for building size and strength are the one's you haven't adapted to yet. Here's how to stay one step ahead of your body.
Deadlift, Powerlifting & Strength, Training
Jesse Irizarry June 21 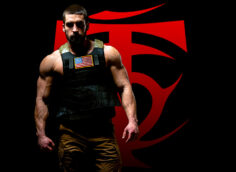