One of the signs of a good coach is that he can admit to mistakes
and continue to make progress. In my particular case, I've been
frustrated watching my athletes plateau in their junior and senior
years. Any good strength coach knows that it's more difficult for
athletes with higher training ages to make consistent gains.

However, I also think it's a mistake to simply accept this
slowdown in progress as a fact of life. We all know that beginners
progress more rapidly than advanced athletes. My question is
"why?"

Why can we have an athlete work all year to increase his or her
bench press by five pounds? We've all been there. If you
haven't, you haven't really coached. A year of training
to go from 400 to 405. A lousy one percent increase.

A potential answer to my dilemma came to me courtesy of strength
and conditioning coach and fellow Testosterone author Jason
Ferrugia.

If you aren't familiar with Jason's work, you soon
will be. He has a great grasp of training concepts, great
knowledge, and a ton of common sense. Jason just finished an ebook
called Complete Martial Arts Conditioning. In my opinion, he
made a huge mistake. This guy shouldn't be limiting himself to
martial artists. Jason knows training, period. I would've just
called it Complete Conditioning for Athletes.

The reason I spoke to Jason initially was that Jason's
sales copy spoke of 100-pound gains in squat strength over one
summer. I politely asked if this was a more advanced trainee or an
untrained athlete moving from 100 to 200. As I'm fond of saying,
figures lie and liars figure.

Jason assured me that these weren't beginners and that he was
experiencing the best success of his coaching career. Jason's
ideas about limiting CNS (central nervous system) intensive work,
particularly for more advanced trainees, really jumped out at me.

In order to clarify the importance of this point, it's
necessary to backtrack a bit. Beginners have some unique
characteristics that are obvious, but still need
mention:

1) Usually, beginners have never been on an organized program.
Most beginners, if they have trained at all, use a haphazard bench
press oriented program which tends to develop the bench press and
little else. Often beginners will bench press up to three times a
week.

2) Beginners have usually never been on an organized in-season
program. Just the addition of in-season training stops the roller
coaster of strength gain to strength loss.

3) Most beginners have never taken advantage of simple
nutritional concepts like pre or post-workout
nutrition.

Why are these obvious points important? Because, at least in the
college environment, we get approximately two years of what I call
"free strength." Free strength is the wonderful progress
provided by good program design and good nutrition. We're simply
organizing the training and forcing the trainees to adhere to a
schedule in which they can't haphazardly choose what they do.
Progress may be due as much to general organizational factors as to
the actual programming.

Some coaches might say, "So what? That's our job." I think
it's the easy part of our job. As I sit and really look at my
athletes, what appears to be happening is that the athlete simply
rises to the level that his fast twitch fiber dictates, and then
stagnates. When the athlete stagnates we then begin to pressure him
about nutrition and rest and supplements to attempt to squeeze out
more progress.

The real problem is this: What do you do after two years? Or
what do you do with a kid who's been on a quality program in
high school?

The problems usually begin in year three as progress grinds to a
halt or begins to move at a crawl. Now the athlete who has always
improved in all test areas begins to experience periods of
stagnation in certain lifts, usually the bench press as this lift
often has the highest training age. We have three problems
here:

1. First, the bench press is probably the only lift with a
training age greater than two; therefore, it'll be the first to
stall.

2. Second, the bench press targets much less muscle mass than an
exercise like the squat.

3. Third, the body may in fact have genetic limits (much like
body fat set-points) for certain lifts. The bottom line? Not
everyone is capable of a double bodyweight bench press. We may be
shoveling shit against the tide.

So, do we simply rise to the level that our fast twitch fiber
dictates and then be doomed to stagnation? Or is there a way to
continue to create progress?

The answer, or the proposed answer, was something that made me
uncomfortable: perhaps I was simply working my athletes too hard.
Perhaps the total volume of work we did was, dare I say, too much.

I hated the thought, but I'm entertaining the thought
nonetheless. Even though I've always been a "less is
more" advocate, Jason was saying once again "do even
less," particularly with your older guys.

Here are some of Jason's thoughts.

• Move to a three-day lifting program instead of a four-day.
Although I like the thought, I'll never do this in the summer
but may during the school year. A summer three-day program will
disrupt every other organization characteristic of my
program.

• Group CNS intensive work on two days. My previous goal was to
spread work out over four days. What Jason was suggesting was more
of a classic, old-school upper-lower split. I compromised with some
changes that I think will work. The end result is that my day two
and four workouts will be brief and will only involve pressing work
with all other work done on day one and three.

Dare I say, my workout looks like legs-back and
chest-shoulders-triceps. It almost makes me puke to describe it
that way, but that's about the concept. Talk about back to the
future. I need to call Michael J. Fox.

This is the most significant change in the entire program design
structure. What this means in my case is that instead of hitting
each pattern twice we'll likely hit each pattern once.

Here's some program design background. Prior to talking to
Jason, our program centered around splits as
follows:

In this system, each of the major patterns was hit twice per
week. After listening to Jason's recommendations, I realized
that I might be better off hitting the lower body patterns once per
week each, instead of twice. My initial response was the classic
"legs can handle more volume," more muscle mass, etc.
Jason's response was, in effect, the opposite.

Jason felt that he could hit each upper body pattern twice per
week but needed to decrease the volume of lower body work. As is
always the case, I wanted to argue my point but resisted the
temptation and continued to listen. As I listened and thought about
it, I slowly began to agree.

What I'd failed to factor in was all the "other" CNS
intensive lower body training my athletes perform:

These were all exercises in the weightroom that tax the CNS to
some degree. Now let's make a list of the other stuff that would be
considered CNS intensive:

What do you notice now? What I noticed was that Jason was right.
The upper body didn't get near the CNS stress that the lower body
got.

I spoke with the coaches at University of Oklahoma a few weeks
ago. One point that jumped out at me was that twenty years ago when
I lifted, the only CNS intensive work we performed were squats,
deadlifts, and possibly some conditioning running. Now, look at the
list: Olympic lifts, plyos, sled work, single-leg work. We've
continued to pile on the CNS intensive lower body work while doing
the same old upper body stuff we'd always done.

It was like the lights were suddenly coming on. When we return
to our four-day program, this is what workouts will look
like:

All lower body will be done only on Monday and Wednesday (we
train four consecutive days in the summer) and only on Mondays will
we actually compress the spine. Wednesday will be a heavy hang
clean day followed by single-leg knee dominant work.

The reality is that I can't promise better results from
this program, but as I said before, you need to continue to try to
make your program better, and make your athletes better. 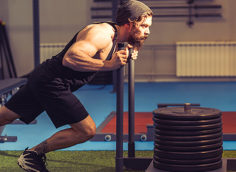 Sure, this type of work is great for body composition. But it's also a strength and muscle builder. Here's what you need to know.
Training
Andrew Coates September 2

Nine challenging exercises that you probably haven't tried before. Give 'em a shot this week in the gym.
Bodybuilding, Powerlifting & Strength, Training
T Nation March 16