It's said the best program is the one you aren't doing, so if you've been training in a similar manner with the same exercises for months or years on end, it's time for a change, and this leg program is definitely a change.

For those who've built their leg workouts around traditional back squats, conventional deadlifts, leg presses, leg extensions, and leg curls, this plan gives you a chance to get outside your comfort zone, give your knees and lower back a break, work on weak points that you may have been neglecting, and provide a new training stimulus.

Don't worry, your squat and deadlift numbers won't go down. Instead, they'll improve as a result of addressing weak links.

For those with knee or lower back issues that have trouble with heavy back squats and conventional deadlifts, this routine provides a good long-term framework so you can continue to train hard for the long haul without pissing off your joints and setting yourself back due to injury.

However, because it's different from your normal program, you'll need to be open-minded and give it an honest chance. If you're the close-minded type that thinks it can't work, it won't. But give it a shot and work your balls off, it'll work really damn well. So put on your big boy pants and let's get down to business.

This program is composed of two workouts per week: Workout A and Workout B. The actual days you train are up to you and your training schedule, but allow two to four days in-between so you have enough time to recover between workouts.

Workout A will consist of just two exercises: the trap bar deadlift as the big-cheese exercise of the day, and a knee flexion based hamstring exercise: either a sliding leg curl variation, glute-ham raise (GHR), stability ball leg curl, or machine leg curl, depending on your current strength level and the equipment you have available.

For glute-ham raises and bodyweight leg curl variations, shoot to increase the reps each week and/or progress to a harder variation. For machine leg curls, keep the rep range consistent and try to add weight each week.

If you're using a regular trap-bar rather than the Dead-Squat bar, opt for using the low handles as long as you're mobile enough. If not, stick to the high handles. You want to get your hips lower at the start of the pull than you would for a conventional deadlift and think about getting your torso upright, so it's somewhere between a squat and a conventional deadlift. This will require dropping the weight a bit from what you'd be able to deadlift with a higher hip position, but it'll place more of the stress on the legs and less on the back, which is the goal here.

Even though the trap-bar deadlift is the main focus of the workout, you'll do the hamstring curl before the trap-bar deadlifts as this helps make the subsequent deadlifts feel more stable. Besides, if you're putting your all into the deadlifts, you likely won't feel like doing anything else afterwards, meaning you might skip the hamstring work if you saved it for the end of the workout.

Workout B will consist of three exercises: Bulgarian split squats, a posterior chain exercise, and front squats, in that order.

Most programs would have you do a heavy bilateral squat first in the workout when you're fresh and put the single-leg work at the end of the workout. I want you to switch the order for a few reasons:

The first four weeks of the program will call for 4 sets of 8 reps for Bulgarian split squats and 4 sets of 6 reps for the remaining four weeks. This means four working sets gradually working up to one top set. Warm-up sets will be largely individual based on your strength level and the weights you're lifting, so I'll leave the details up to you.

For those already proficient with Bulgarian split squats, the goal is to add a small amount of weight each week. If you hit the prescribed reps for a given week, bump the weight up the next week. If you fall short of your rep goal, keep the weight the same and try to get within the rep range the following week.

If you're a total newbie with single-leg work, stick with just bodyweight on the Bulgarian split squats until you feel comfortable adding weight, or just stick with regular split squats with both feet on the ground.

If you feel up to it, you can add one or two additional days of sled work per week, doing a mix of forward pushes and reverse sled drags. Just make sure that these extra workouts aren't taking away from the two primary strength workouts.

There's no built-in deload with this program, but if you need to take a few additional days between workouts or even need to take a week off at some point, listen to your body and do so. Just pick back up with the program when you resume training.

At the end of eight weeks, you can either choose to continue training in this fashion or move on to something new, but give it at least eight solid weeks. 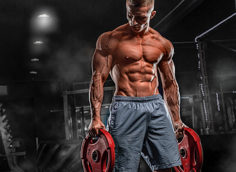