Most of us admit to wanting killer abs, but few of us ever have a plan on how to accomplish it. We go into the gym and the mishmash of what we do is determined by what we feel like doing, or more likely, what we DON’T feel like doing.

More bizarrely, when it comes to training abs, all knowledge, wisdom, and logic on the subject of fitness and lifting seems to leech out of our brains. What emerge are actions and practices that don’t make much sense and are actually counterproductive to our professed goals.

In an effort to right the ab ship, here are some decidedly inconvenient truths about the way most of us train abs.

1 – Stop with the plank worship already. 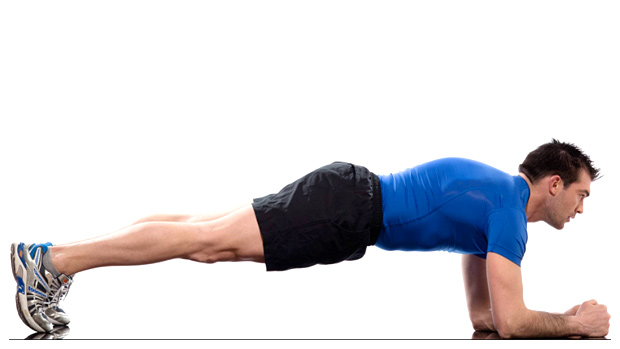 Planks are an isometric exercise – they don’t involve any movement. Granted, doing planks activates a hell of a lot of muscle fibers, but they aren’t going to give you a washboard stomach or cause any further etching of your abs. You need the abs to hypertrophy for that to happen, and isometric movements like planks aren’t going to do that.

Expecting to build your core musculature with planks is like holding a heavy canned ham at a 45-degree arm angle for an extended period of time and expecting it to grow your biceps muscle. Nope, you need to do isotonic movements – where a muscle shortens to overcome resistance – to have any hope of having a true washboard stomach.

Sure, planks will allow you to maybe withstand a punch from someone who’s sick of your silly planks and they’ll probably facilitate athletic ability (because they allow you to withstand anti-rotational forces), but they won’t build eye-popping abs. Do them as part of your core training, but don’t have any illusions about them.

This is the biggest mystery in weight lifting. Why would men and women who seem to know a little bit about weight lifting pursue this contrary path of trying to make the waist smaller through resistance exercise?

Abs are muscles. They grow when exposed to resistance exercise. Granted, the better built your abs are, the sooner they can be seen through the fat. It’s like reeling in a fish you’ve hooked. If you hooked a tiny sardine, you’re not going to see it through the murky depths until it’s practically out of the water, but if you hooked a big fish, you’re going to start seeing it emerge from a much farther depth.

Well-developed abs are whales. They squeeze the fat aside amid cries of “Thar she blows,” and beg to be noticed.

It’s true that John Meadows does this thing called a pulldown crunch that he recommends for guys with distended, long-distance Doritos-eating trucker guts. You simply seat yourself in a pulldown station and grab the bar as if you were going to do pulldowns. You then inhale deeply and suck in your stomach as hard as you can. Push the abs against the spine, or try to. Then you blow out all your air and crunch down.

Granted, these probably won’t literally make your waistline smaller, but they do allow you to gain greater control over your abs so that you eventually start to subconsciously girdle in your abs when you’re walking around, at least giving people the illusion that you’re a svelte-waisted bastard.

If you’re some sort of competitive athlete, you probably want big, powerful obliques. They equate to power and strength. They allow you to throw a ball faster, or to repel a charging lineman, or to do a whole bunch of other functional stuff. But if you’re just some guy who wants to have an aesthetic waist, big obliques are contradictory to your goal.

Thick obliques diminish or erase your V taper and make you look like one of those trashcan-shaped droids, minus the flashing diodes. They force you to ditch your 32-inch waistline jeans and trade them in for those big, farmer boy Duluth Trading Company jeans with all those extra pockets to store your chaw in.

It all comes down to degree, though. Reasonably developed obliques will give your torso that armor-plated gladiator look without ruining your V taper. That should be especially appealing to women. Most want the obliques to be adequately strong and functional, but still maintain that highly prized .7 waist to hip ratio that turns men into hormonally charged little pools of quivering protoplasm.

That’s why obsessing over obliques is particularly strange. Men and women alike work them daily, doing stupid broomstick twists, weighted side bends, or worse yet, weighted sideways sit-ups in a Roman chair.

Again, obliques are just muscles and if you work them hard, they’ll grow bigger and wider, which is probably the last thing most people want.

You can blame desiccated-liver quaffing bodybuilders from the 1960’s for this one. They thought that since abs are pretty much activated whenever you’re standing up (along with calves), they must have high endurance and as such need to be worked every day.

Not so. They’re pretty much like every other muscle group. They grow in response to heavy resistance done for 8 to 20 reps. They need to “heal” and grow in-between workouts.

Even though a lot of people know this, deep down, they insist on working abs every day. It’s like the fitness version of that cultish Opus Dei bunch, only instead of whipping themselves as a form of “corporal mortification,” they work their abs for hours every week until they see God in the bottom of a waste basket.

While it’s true the abs, in most people, have a lot of slow-twitch, endurance fibers, they actually have a larger percentage of fast-twitch fibers. That means, in general, that you should train them with a variety of multi-joint exercises using explosive concentric contractions and slower eccentric (negative) contractions, lots of sets with heavier loads, and adequate rest in-between sets. You also shouldn’t train them every day. You know, just like regular muscles.

5 – Ab training by itself won’t give you a washboard stomach. 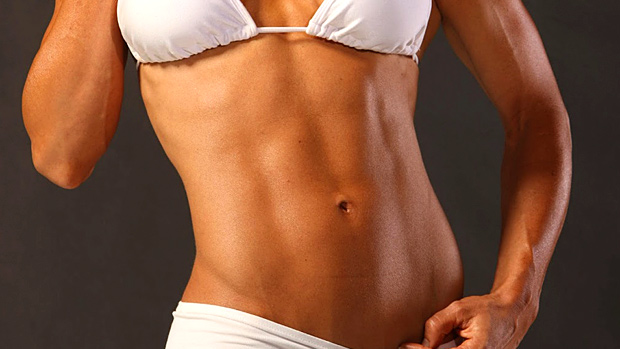 You ever see any of the guys that hold records for the most consecutive sit-ups? For the most part, their midsections look like tubs of soft fromage; not much better than some video-game slacker who can only muster 10 sit-ups in a row.

What most neophytes don’t realize is that everyone has abs – they’re just not visible. Strip away the fat and whammo! Abs! Unfortunately, most of these doughy abbed guys think that the more they work their abs, the sooner they’ll emerge, but the abs are shy little creatures, preferring to hide until they’re forced out. You need to rid the mid-section of the fat and sadly, exercise itself isn’t enough.

The trouble is, a pound of fat contains roughly 3500 calories. See what I’m getting at? It’s damn difficult to burn fat through mere exercise. It might be different if you got on a treadmill, set the incline at 15%, kept it there, and ran uphill at a pace of 4 miles an hour for 60 minutes. That might burn some serious blubber over the course of a few weeks, but it’s certainly not easy to do. Besides, it would likely fatigue you and kill your weight workouts.

Sorry, but to make the abs surface, you’re going to need to diet. Get your body fat to 10% and the shy little things will likely start to surface. Get it down to 7% and they’ll be totally naked and exposed for all the world to admire.

You may be one of those poor bastards that retains a roll of fat around his waist no matter how much you diet and how lean you get. That “tubey” look may reflect insulin resistance.

While your instinct might be to adopt a low-carb diet, it doesn’t fix the problem. What’s more, a chronic low-carb diet leaves your muscle-building capabilities impaired. What you need to do instead is optimize insulin sensitivity:

I know a guy who started doing Pilates because a girl he knows has great abs and she does Pilates. In a way, this is just as logical as him stocking up on Summer’s Eve because he noticed that a girl with great abs uses feminine hygiene products.

Sometimes we look for associations that just aren’t there. More easily understandable are people who are romanced by the abs of fitness competitors, bodybuilders, or CrossFitters and seek the same results by emulating them.

One of the problems with that is that all three of the preceding disciplines depend heavily on PEDS to help them get that shredded-abs look. If you want to copy the way they train so that you too can have abs, make sure you copy their drug regimen, too.

No particular regimen guarantees abs. You need to go at it logically and follow a multi-directional ab attack. As far as training them, remember that there are multiple pairs of core muscles and they move in multiple planes. You can’t just train them bi-directionally, i.e., up and down or side to side. Neither can you train them by turning yourself into a two-by-four and plank the day away.

In general, you need to do:

Again, as with any muscle, you need to do a variety of rep ranges and allow proper rest between workouts, keeping in mind what the hell your goal actually is, whether it’s to create a woman-wooing washboard or a powerful juggernaut core, and adjusting work loads and techniques accordingly.