The ability to hinge (i.e., a posterior weight shift through the hips) is our single most-important movement pattern. It helps us squat and deadlift like bosses for maximal size and strength gains, not to mention do those things pain-free.

Yet a basic hip hinge pattern seems to be an elusive quality for many lifters, namely due to quad-dominance, poor hip mobility, and poor core stability. I'm shocked at the number of people who ask me about getting bigger numbers on their deadlift when, after evaluating their technique, their hip hinge looks more like a lumbar disc explosion waiting to happen.

It's time to get back to the basics and master the hip hinge so that you can chase big squat and deadlift numbers while keeping your back injury-free.

A hinge is about sitting back into the hips with minimal knee bend and snapping forward with a strong glute contraction at the finish. That's it.

There are many variations but what's important isn't necessarily doing everything but finding the right variation or two for you. It's like any other corrective strategy – find what works and toss the rest out and get from point A to point B as quickly as possible.

Here are the main movements I use in my teaching progression for the hinge, along with who should use it and how to incorporate it into your programming.

You may fail at different points along the continuum and have different needs, but it's always better to start at a more regressed level and work your way through. We'll go from general to specific.

A hip hinge doesn't have to be taught from a standing position. I like the hip thrust because it's essentially a supine hinge that allows you to work against gravity. Besides just getting into the hips, a great hinge is also marked by a powerful contraction of the glutes at the finish.

Make sure to engage your anterior core at the top so you don't fly into excessive lumbar extension. There's a difference between extending your hips and posteriorly tilting your pelvis for maximal glute stimulation.

Who Should Do It. If your hip hinge is messed up, this is where you would start as it puts you in a position to succeed and "trick" yourself into a hinge without putting your back in a relatively risky position. I prefer doing these versus glute bridges because it introduces more of the true range-of-motion of a hinge.

When To Do It. As a hinge-developer, include it in your warm-up and as you get better, introduce load and make it more of a "meat-and-potatoes" exercise. Once you're squatting and deadlifting well, it's a great accessory lift to continue to reinforce good technique and develop glutes that catch attention.

Specifically, on your deadlift days, you can use it as your supplemental lift (A2), especially if your back isn't the greatest. Not many seasoned lifters have an easy time going straight from deadlifts to a bent-over row variation. Hip thrusts can help give your lumbar a break before you bend over and grab heavy weight again.

I started using this as a filler movement between sets of deadlifts and it's a pretty cool exercise that's helped my deadlifts feel better. When you sit back into the hip, you get a deep stretch on the hamstring, leading to a powerful hip extension that gets the down glute firing and the down hip flexor to stretch.

Once you're able to sit back with a relatively flat back, put a heavy kettlebell or dumbbell down in front of your knee and pick it up.

Who Should Do It. If you normally perform traditional hip flexor/hamstring stretches before training, try this one out as a more complete (and specific) option for grooving your hinge on deadlift days.

When To Do It. Use it in your warm-up or as I prefer, as a filler move between sets of deadlifts. Shoot for 2-3 sets of 5-6 reps on each side.

The hip hinge with a dowel lengthwise along the back isn't anything new. To be honest, I wasn't getting much out of it with people, especially those who are a little stiffer through the thoracic spine and tend towards kyphosis.

That's why I decided to take the dowel and flip it horizontally. This automatically opens the chest and shoulders up and does a better job of teaching the "chest up" position of a deadlift.

It's all well and good to have great hip mobility, but if your chest is turned toward your jewels, then we have a problem.

Who Should Do It. Most jobs require you to be at a desk most of the day. If you tend toward more of a kyphotic posture and lack general t-spine mobility, this drill can teach correct positioning. Obviously, you should also prioritize your upper back mobility with quadruped T-spine rotations, side-lying windmills, and the like.

When To Do It. Incorporate it as part of your dynamic warm-up or alongside your deadlifts as an active recovery filler between sets.

I stole this one from Dan John. I've never felt a posterior weight shift quite like it.

Set up a few inches off the wall with hands flat at chest level. Slide one foot back along the ground as you sit back into your hip, keeping the knee bend minimal. When your back foot is about parallel to the floor with the toe tucked, tuck that hip down slightly to the ground. You'll know when you're in the right spot when you feel an absolutely wicked stretch on the hamstring.

Who Should Do It. Everyone should try this at least once. It's also great for those who haven't had their face contort during a bodyweight movement in a while.

When To Do It. I use this for my deadlift prep for 2-3 sets of 2-3 reps per side with a 5-7 second hold. Trust me, that's probably as long as you'll be able to tolerate.

Get Loaded. Enough with the bodyweight stuff – let's get some weight in your hands and get the previous drills to "stick."

The kettlebell deadlift often gets dismissed because of the loading limitations, yet most trainees would be better off putting away the straight-bar for a second and using the bell to pattern a better hinge.

Because the load stays within your center of gravity, the stress placed on the low back is relatively low, giving you an opportunity to ingrain the hinge with minimal risk.

If you don't possess the mobility/stability to pick the bell up off the floor with perfect technique, just slap down a few 10-pound plates as a buffer, taking away one plate at a time until you're picking it up off the floor.

Remember, simply decreasing/increasing the load isn't the only way to progress a lift. In this case, increasing the range-of-motion is the progression. From there, work up to the heaviest kettlebell you can find.

Who Should Do It. If you're just learning how to deadlift, this a solid place to start (beyond the bodyweight progressions listed).

When To Do It. If you're a newb, put them front and center in your program. I don't like going above 8 reps on the deadlift in general, so keep the reps in the 6-8 range for 2-4 sets.

If you're more of a veteran lifter, it's perfectly acceptable to use the kettlebell to groove a good hinge pattern and create more explosiveness out of the bottom. Throw them in on a deload week and give your back some relief.

I'm not a fan of the name "stiff-legged deadlift" because it cues some trainees to lock out the knees. What we want is a soft bend in the knees.

Do these on the outside of a power rack and set the pins just below hip height. Set up over the bar as if you were getting ready to deadlift, pull it up, take one step back, and go into the movement.

Aim to get the bar just beneath the knees, cueing yourself to push back into the hips to get there. If you don't feel much happening on your backside then you're probably getting into the knees too much.

Because the weight is out in front of you, there's going to be more stress on your lower back, which makes this progression specific to the conventional deadlift.

Still, many lifters immediately want to go into excessive lumbar extension and crank their head up. Don't put more stress on your back than there already is.

Brace your core, get a slight arch, and tuck your chin. 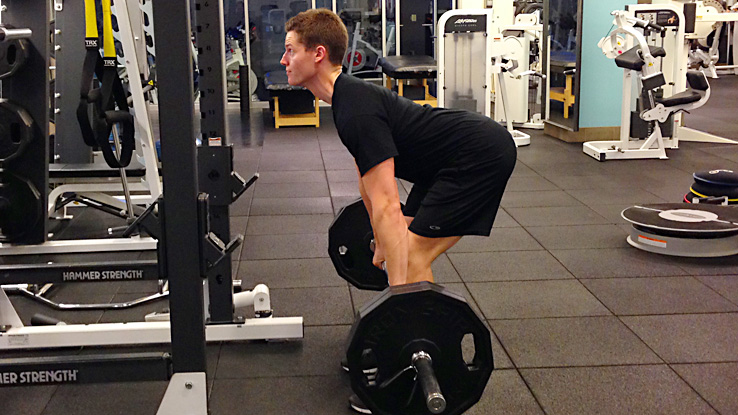 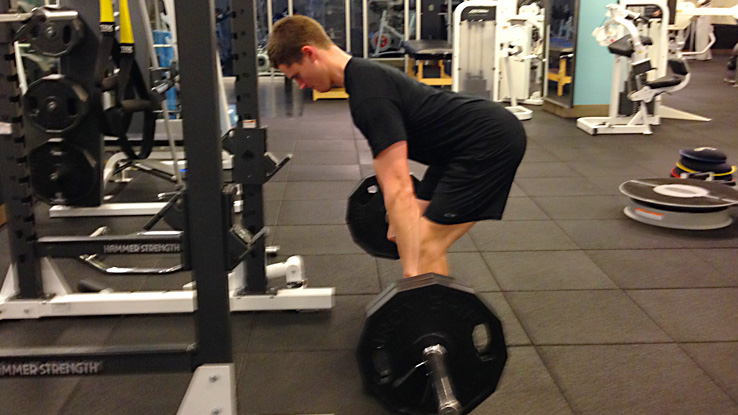 Who Should Do It. At this point, your hinge is getting good, so this is for those who want to be able to incorporate some serious loading before going back to pulling off the floor.

When Should You Do It. I've found stiff-legged deadlifts work well as a supplemental lift on squat days. Don't go above 8-10 reps as technique tends to slip after this point. You could also use them as your primary deadlift pattern, if you happen to be cycling out pulling off the floor, but that's more rare.

The last progression in the hinging continuum is the sumo. The sumo is a little different because the setup is unlike anything that's been used in prior progressions. However, I still like it because it's as close as you can get to a conventional deadlift without actually doing one.

You don't see sumos often when in fact they make for a great option for trainees that hit conventional and trap-bar deadlifts week-after-week with mediocre form. This is because the sumo deadlift limits the amount of hip mobility you need, as compared to conventional deadlifts.

The wide stance combined with the abduction of the hips and the out-toeing make it somewhat easier to sit the hips back and get to the floor, but because it's easier to sit back, it'll also make it easy to sit too low.

Sumos will get you comfortable pulling off the floor with your enhanced hip hinging ability. That said, there's a reason they aren't a main lift in most programs for more than a few months. They demand a lot of adductor length and the abducted/externally rotated positioning of the hips can irritate them over time, so make sure to cycle them in-and-out of your program.

Who Should Do It. Those working up to a conventional deadlift, have limited hip mobility, or have deadlifted conventionally for an extended period.

When To Do It. Besides being the final hinge progression to a conventional deadlift, the sumo is a great lift to cycle in periodically in a strength program to boost the conventional deadlift. The sets and reps will vary depending on your goal, but stick with the guideline from earlier of not going above 8 reps in a set.

Strength isn't always about pushing the poundage. Strength can also mean owning a pattern. In this case, the above exercises will help you own your hip hinge pattern.

Incorporate the progression to your specific needs and abilities and experience the positive effects they'll have on your deadlift and squat.

Let's see how fit you really are. Take this quick test. And try not to puke.
Tips, Training
Tim Henriques July 13 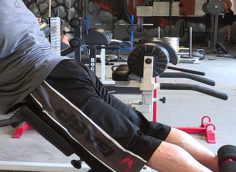 How will people lose fat and build muscle in the near future? Here's what the experts are expecting to see.
Bodybuilding, Diet Strategy, Powerlifting & Strength, Training
T Nation July 13

Fight perma-slouch by moving your thoracic spine into extension. Hang out in one spot for as long as you feel a stretch. As you feel it fade, shift the roller down your spine.
Exercise Coaching, Mobility, Soft-Tissue Techniques, Tips
Mitchell Starkman June 23