With so much talk these days about "functional training," it seems arm training has taken a dive in popularity. While this may be the case in some circles, for those of us who got into lifting weights in hopes of attaining muscular arms that resemble those of a superhero, doing direct bicep and tricep work will never go out of style.

Having big, muscular arms that stretch your shirtsleeves will never go out of style either, so let's take a look at a few strategies that you can use to jumpstart your arm growth.

1 – Train In All Rep Ranges

You see, a bodybuilder who wants bigger arms needs to stimulate those bi's and tri's with a variety of stimuli in order to maximize growth from various components of the muscle tissue itself.

An athlete like a weight-class bound fighter should focus primarily on doing low rep stuff with a high repetition speed to maximize power. A bodybuilder should do that and do sets that maximize time under tension to maximize cross sectional area of the muscle.

As a general rule of thumb, for maximizing arm size, spend about one-third of your training time doing low reps, one-third doing moderate reps, and one-third doing higher rep sets. This will ensure that you provide your arms with various types of stimulation, thus causing muscle growth via a variety of mechanisms.

For those who tend to really like training, the most common mistake made when it comes to training arms is to do too much overall arm work.

Keep in mind that every time you do a back exercise which involves elbow flexion, you're also using your biceps. Even though your back training isn't "overloading" your biceps, the overall stress is still somewhat cumulative, adding up over time.

Even more important is to consider the amount of work done by your triceps during chest and shoulder pushing exercises. Whether it's a standard bench press, an incline dumbbell press, a standing barbell press, or a basic push-up, pressing movements do place a good deal of stress on the triceps.

In an effort to get bigger arms, many people understandably add sets of bicep and tricep work to their training program, but the problem may not be lack of stimulation. The problem could be that the overall stress placed on the biceps and triceps throughout the week is more than they can adequately recover from. And if you don't recover, you don't grow.

So if you find that your arms aren't growing, take a look at the overall volume of chest, shoulder, and back work that you're doing from week to week. If your volume of training from the push/pull body parts is pretty high, then your lack of arm growth may very well stem from overtraining. 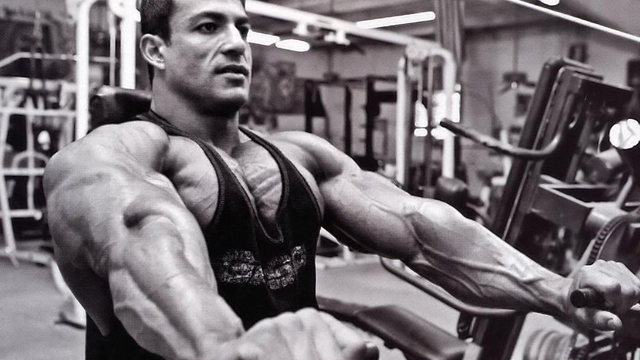 Although many gung-ho trainees don't make progress in arm size due to the fact that they're overtraining, many people fall on the other end of the spectrum and could use more direct arm work... especially more frequent arm work.

To make this strategy work, however, you have to make sure that you're starting from a fully recuperated state. If you need to take a full week off from training, or a month off of direct arm training, go ahead and do so before ramping up your arm training volume and frequency.

In general, I find that biceps and triceps each grow well with, and can recuperate from, approximately 9-12 working sets per week. But instead of doing all these sets in one workout, you can really jumpstart your arm growth by dividing your training volume over the course of three weekly arm workouts.

After about four weeks of doing this, add a little more volume (a work set or two per week) if you're still recuperating and progressing well. Do the same in two more weeks if applicable, after which it will be time for some much-needed recuperation.

If you have testicles, you derive a certain sense of power from the focus and effort it takes to lift "heavy-ass weights." But if your goal is to get bigger arms, then you're going to have to keep an eye on your ego and make sure you're optimally stimulating your biceps and triceps when you train them.

No, that doesn't mean you have to opt for sissy weights and always train like the form police are watching. But you should always train safely enough so that the brunt of the stress is being placed on your muscles, not on your joints.

To keep your form in check, control the eccentric (or lowering) portion of the rep enough so that you can make it last at least two or three seconds. Don't necessarily do this every rep, but make sure you can.

Likewise, focus on the muscle you're working as if it's all that exists. When you're doing barbell curls, picture your biceps brachii shortening on the way up, then lengthening on the way down.

The main thing to keep in mind regarding arm-training form is to make sure that you really feel your biceps and triceps working when you're training them. If you don't get a good mind-muscle connection when training your arms, lighten the weight, slow down, and/or tweak your form a bit until you do.

Remember, athletes train movements and bodybuilders train muscles. If you want arms like a bodybuilder, then focus on your biceps and triceps, not on elbow flexion and extension.

In literal terms, getting leaner isn't really a tip for making your arms bigger. On second thought, getting leaner does generally improve insulin sensitivity, which makes it easier to get growth-producing nutrients inside the muscle cells... but I digress.

Stripping a layer of fat off your arms is the best thing you can possibly do to make your arms look bigger!

Who cares what your arms actually measure? That only matters when monitoring your progress so you can see what's working and what's not. What we care about is what our arms look like. And getting leaner makes our arms look both bigger and better!

Every single time I've begun dieting down for a contest someone says, "Man, you're arms are looking huge! How much weight have you gained?"

When I tell them I've actually lost 10 pounds they don't believe me, because they can see with their own eyes how much "bigger" my arms are. But what they actually see is arms that look bigger because they're no longer covered up by a thick layer of fat. 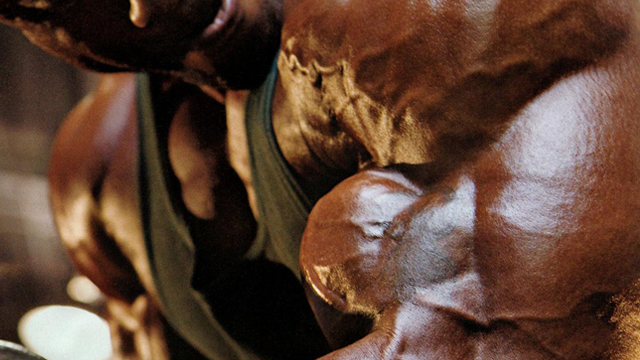 Time and time again, the best arm-building results come from training biceps and triceps on the same day, and on a day of their own.

Obviously training arms (or any body part) when you're fresh and chockfull of ATP and glycogen has advantages over training them when you're exhausted from training another body part, but the benefits seem to go beyond simply lack of fatigue.

The superiority of arm growth from having an arm day is so obvious that I couldn't help but put on my thinking cap to come up with an explanation. I suspect that training biceps and triceps (and subsequently the large brachialis) in the same session places significantly more outward, and thus expansive, force on the surrounding fascia than training each separately.

Done repeatedly over time, this would promote growth and expansion of the dense fascia encompassing your upper arm, especially if you thoroughly stretch your arms while they're still pumped.

Whether due to fascial expansion, better energy, or a combination thereof, training triceps, biceps, and their friend the brachialis all in the same session is a great strategy to get your arm hypertrophy moving in the right direction.

Whether you like it or not, for your arms to get big and stay big, you're going to have to have healthy, pain-free elbows. And as someone who has both had and treated elbow injuries, I can tell you it's a lot easier to prevent them than to fix them!

The first step in keeping your elbows free of tendonitis is to use a weight you can control, not a weight that controls you.

Skull crushers (triceps extensions), which happen to be one of the best triceps exercises in existence, tend to cause elbow tendonitis if done year around. Of course there are many factors involved, but if you have skull crushers in your routine more than eight months out of the year, the likelihood of triceps tendonitis goes way up!

To be safe, do skull crushers one training cycle, then leave them off of the next. That area just above your elbows will thank you.

Put a few of these tips to work now and get ready to stretch some shirtsleeves in a few months!

Yes, it's odd looking. But it's also a super effective way to trigger new arm growth. Take a look.
Tips, Training
Joel Seedman, PhD November 9
In this article, we'll look at the variations of the shrug that can be used to accomplish several specific objectives.
Training
Paul Chek February 23 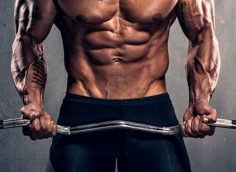 A 6-month long study used experienced lifters to pinpoint what amount of volume would build the most muscle and strength. Here's what they found.
Bodybuilding
Paul Carter August 30