Few pieces of equipment offer the ability to train power, strength, hypertrophy, strength-endurance, and endurance as well as the Prowler. And very few implements allow for such an incredible variety of movements.

What, you thought the Prowler was only useful for loading up every plate in the gym and pushing until you puked? While that's a popular use, it only scratches the surface of the "fun" and effective exercises you can do.

Whether your goal is athletic performance or pure size, you need to incorporate some Prowler work.

Nearly every exercise that can be performed on the Prowler is concentric-only in nature. While that alone may not be great for hypertrophy, it does allow you to use Prowler exercises more frequently without overtraining.

However, if you're looking to bump up training volume (which is beneficial to hypertrophy), the Prowler is a great substitute for finishers and burnout sets. And unlike a snatch or front squat, Prowler exercises have a very small learning curve, making them great for all fitness levels.

But be warned, if you've never used the Prowler before, do not try to add in all of these exercises simultaneously or crank up the volume right off the bat.

The Prowler can be very demanding on the cardiovascular system, and feeling as if your lungs are going to explode out of your chest in the 30 seconds after your set is common. So ease into it.

Note: About half the movements I perform on the Prowler require a strap with handles. I love the TRX for this as it's a good length. It's strong and has comfortable handles, which can't be overlooked when you're trying to drag, row, or curl a heavily loaded Prowler.

The key to performing this exercise is to make sure your back stays against the pad during the entire movement and you keep your hips low. Thighs should be parallel to the floor. Resist the urge to lean forward or allow your hips to creep up, both of which will happen if you don't remain focused.

Second in popularity to the standard Prowler drive is the Prowler drag, a similar movement pattern that challenges the lower body, particularly the posterior chain.

By placing the handles of the strap overhead, you increase the difficulty by requiring increased mid-line as well as shoulder stability. Needing to substantially reduce the weight you can use compared to the standard drag reveals a weakness in your core or shoulder stabilizers.

You're aiming for your torso to be at approximately 45-degrees and you should be achieving a straight posture from your head to your heels.

The Prowler isn't strictly for lower body exercises. The Prowler chest press will fire up your pecs, delts, and triceps in a big way. It's a great "finisher" to your chest/triceps day.

The keys to performing the movement correctly are getting your lead foot directly between the weight plates and keeping your chest between the poles with your elbows fully bent.

Be sure to switch the lead foot between each rep. Adding a forward torso lean is fine, but remember you'll be getting more delts than pecs at that angle.

You can perform this exercise by continuously holding the poles or by allowing your hands to come off the poles and "throw" the Prowler forward, which helps develop more power.

A great upper body/lower body combination lift is the Prowler squat to row. Grab the straps with a neutral grip and your arms fully extended.

Maintaining an upright posture in your torso, complete a full-depth squat. As you stand up, extend your hips forward while rowing the Prowler towards you.

If you've ever performed "cheat" seated rows where you bend your torso forward and rock it back as you pull, the motion will be similar. Take a few steps back until you remove all the slack out of the strap and go again.

Fair warning, between the squatting and the rowing, this exercise carries a high metabolic demand, so think twice before attempting to squat/row down the length of a football field.

Yes, you can do curls with a Prowler! If you do these the right way your biceps will be screaming.

The key is to keep your upper arm parallel to the floor during the entire curl. Letting your elbows drop will make this significantly easier and less effective. You'll also want to keep your knees slightly flexed as you curl.

I've saved the best for last, and by "best" I mean most awful. Not only will the Prowler crab walk light up your quads, it demands serious core stability and great thoracic extension. Without these postural elements, you'll be walking less like a crab and more like a forward-rounded hippo.

As with the backwards Prowler walk, you want to avoid the tendency to raise the hips and take tension off the quads as the set continues. That's easier said than done.

You'll also need to take a slightly wider stance with this movement than you would with your squat to avoid slamming the Prowler into your shins as you walk backwards.

Sled 'Til You're Dead

Now that you've got some new moves to work with, here are some effective ways to incorporate them into your programming: 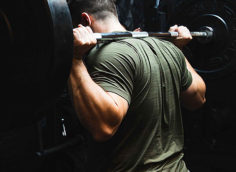 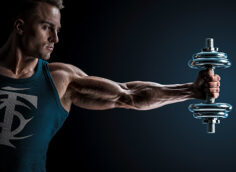 Take on a new workout challenge, bring up a weakness, or just have some dang fun with these unconventional new exercises.
Exercise Coaching
T Nation October 20

Still doing three sets of crunches for abs before leaving the gym? Check out this article for a new approach to the coveted six-pack.
Abs, Training
Nick Tumminello June 14