The bench press may be your main squeeze, but as Lee Boyce points out, you just can't have too many exercises at your disposal. (They're kinda like girlfriends in that way.) Whether you need to bust out of a slump and build some new muscle or are just looking for some cool new exercises, this article delivers the goods. – Nate Green

Whether we're adding more muscle to make a better-looking physique or fixing a weak muscle to add more strength, one thing I like to do with my clients is look for exercises that beat the pants off conventional exercises by optimizing a muscular contraction through 100% of the range of motion of each rep.

That's why I wanted to share six of my favorite upper body "secret weapon" exercises for you to try the next time you hit the gym. So let's get to it.

The lats are a relatively easy muscle group to hit because of how large they are, but therein lies the problem: due to their large size, it's not easy to target the whole thing. Good pull-ups and pull-downs usually do well to develop the upper portion of lat tissue, but if you're a taller lifter like me, chances are you have high lat attachments. That means you're probably gonna have other muscles besides your lats "kick in" when your chest comes closer to the bar, thus taking work away from your lats. Not so with the following back-builders. 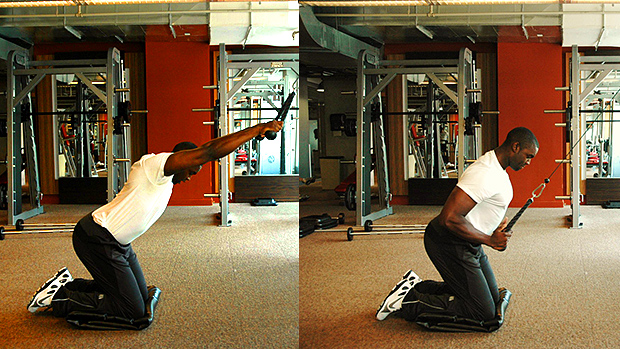 The "J" rope pull-in combines a stiff-arm pull-down with a modified seated row to make for a solid exercise. The start and finish position allow full lat activation with every rep.

While kneeling with arms stretched overhead, set your shoulders down, and start the movement like a stiff-arm pull-down with your arms straight, elbows flared, and hands apart. Smoothly transition with an arcing motion into a row movement (to make a letter "J" pattern) and finish with hands at the mid abs. 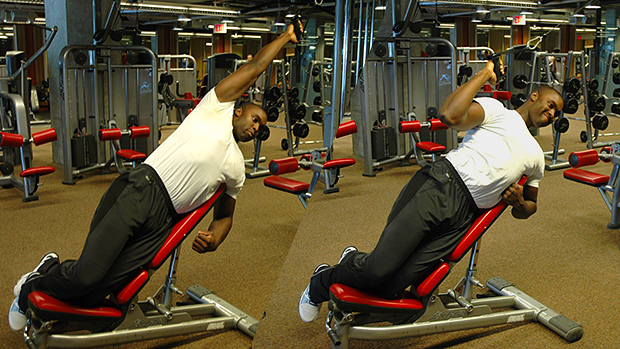 The cobra pull-down is a great way to get the lats through a greater range of motion than a regular pull-down. Because of where the hand rests in the start position (almost directly above the head), the lats have to contract from a much more lengthened position. The cable and single handle also allow for more integrity of movement at the elbow, which can be a vital adjustment.

Start by ensuring that you're slightly in front of the cable pulley, and "unlock" your shoulder blade while stretching your arm. Next, set your shoulder down and pull through the lat, remembering to keep your elbow in line with your wrist and not behind it. At the finish position, squeeze the crap out of your lats. Use a 20X1 tempo. (Squeeze for one second at the end of each rep, lower it in two seconds, don't rest at the relaxed position, and pull for one second.)

These two lat exercises don't require you to set the pin at the bottom of the stack for you to really feel them, so I recommend using high-rep sets for both.

The ultimate exercise for the chest is difficult to pinpoint, and actually a very controversial subject. Few exercises for the chest provide perfect isolation. Plus, there's only so much barbell benching one can do to help develop the pecs. What we have to remember is that through a pressing movement with a fixed bar–like a flat bench—the pecs will forfeit constant tension as the lift progresses and the triceps and front delts become loaded.

I decided to choose two exercises that allow for isolation (via use of dumbbells and cables rather than barbells) that also allow for contraction through the greatest range of motion. This pair of exercises will keep your chest working harder than the token white guy in the And1 Mixtapes. 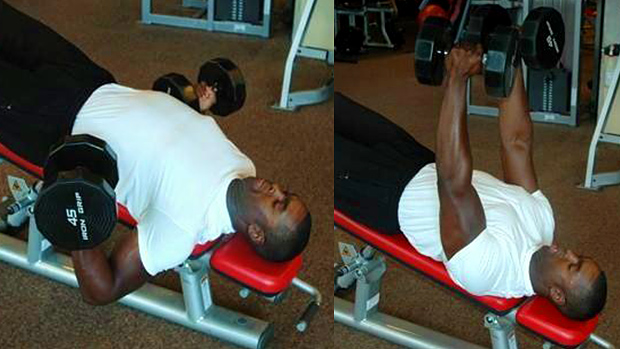 There's a threefold benefit to this exercise: First, the decline limits the involvement of the front delts. Second, the position also allows for less lockout distance, meaning more sternal pec involvement. Third, the bottom position of the lift externally rotates the humerus, which brings the pecs to optimal length for max contraction. Plus, the use of dumbbells allow for some "play" with the elbow position through the lift, which can act as a shoulder-saver.

Start with an externally rotated (supinated) grip at the bottom of the lift, and through the concentric portion make a half turn so the dumbbells finish in a neutral grip position. Make sure to keep the pressing force perpendicular relative to the ground and not to your body (you're on a decline bench, after all).

Since we hit the sternal pecs through the key press, we'll add one for the clavicular pecs for good measure.

This one takes serious explanation. First, you can see by the pics that the cable pulleys are set at hip height. You can also see that my upper body is as close to parallel to the ground as possible, and my knees are slightly bent. My grip is palms down, but pulling slightly inward through the wrists. If you invert my position (or turn your head sideways) you'll see my start position is pretty much the same as an incline dumbbell fly.

What makes this different? The fact that I've exploited the crap out of the force angle and that I have cables pulling backward rather than dumbbells pushing downward, which allows for constant tension throughout the entire rep.

As you progress through the lift, go through a back extension to bring your body near vertical, but keep your palms facing down. This will maximize the length-tension ratio in the pecs through the entire lift. Also, make sure your elbows stay facing outward instead of down at the ground, and move your arms inward at the same rate your torso moves upward.

Doing this properly creates one kick-ass movement that really isolates the upper chest from start to finish. Go ahead and try some Boyce flies and I think you'll have a new favorite chest exercise. Also, I double-dog-dare you to try them in a compound set. To do it, simply use them directly after a set of incline bench presses!

What would an exercise list be without a couple cool arm movements?

With this exercise we're going to maximize the involvement of the pesky long head of the triceps' involvement by moving our elbows away from the torso. It's perfect for struggling triceps and much more elbow and shoulder friendly than its flat bench counterpart.

Using an EZ-curl bar, drag your arms away from your body at the bottom of each rep so the barbell moves toward the floor. Then reverse the movement and drag your arms back toward your head and finally extend your elbows for your concentric rep. Make sure you don't flare your elbows.

Warning: this exercise is a tough one, so you're probably gonna have to go lighter than your normal skull-crusher weight. 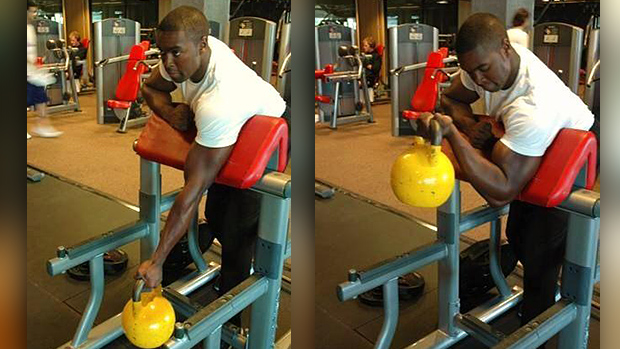 Using a kettlebell to perform biceps curls is a genius idea (I don't have enough balls to say it was mine, though). And when it comes to preachers, their efficacy gets turned up one more notch. I'm no biceps isolation junkie by any means, but this one is money.

Since the kettlebell is on a handle, the majority of the load rests below your hand. That means that as you curl the weight, your biceps can stay fully contracted for a much greater percentage of the lift without becoming inactive at the top when a regular barbell or dumbbell is located directly above the elbow. That means you're optimizing the length-tension ratio by changing the position of the actual load.

Remember to squeeze up through the pinky finger as you pull to ensure both heads of the biceps are active! Also, try to keep your wrist slightly "broken," meaning down and back just a bit, in order to minimize the use of the forearms.

As fellow Testosterone Magazine author John Romaniello said, "It's better to have 10,000 exercises available to you than 5,000." The more you know, the more you can play, and the more gains you'll make.

Since these are all isolation movements, feel free to toss all six exercises into your current training program for some much needed variety and get ready for some big gains and fun times. 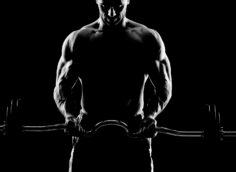 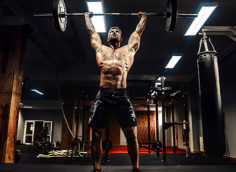 Most fitness challenges are made for tiny guys whose relative strength is off the charts. Try these specifically designed for big men.
Training
Lee Boyce August 26