While both men and women tend to make predictable errors in the gym, some of the more recent trends in female physique training are particularly questionable. First, you have to wonder who's perpetrating some of the silly things you see women doing, like workouts consisting exclusively of jumping and pseudo-plyometric drills.

How about workouts that feature nothing but triceps kickbacks, drills that rely heavily on balance (such as dumbbell presses done standing on a BOSU balance trainer) and "multi-tasking" movements such as lunging with light dumbbells that you press overhead after each lunge?

Men are much more likely to emphasize the proven staples, exercises that have been successfully used by physique athletes for decades – squats, presses of various types, pull-ups, dips, rows, deadlifts, and sure, let's also include direct work for arms, abs, and calves.

Many women, on the other hand, focus mostly on movements that have such high skill and/or balance requirements that they can't be loaded sufficiently to improve strength or hypertrophy to any significant degree. Take for example when women simultaneously lunge and overhead press. If the dumbbells are light enough to overhead press, they won't be heavy enough to create a challenge during the lunge portion of the exercise.

Or, going back to the BOSU presses, when you're standing on an unstable surface, you won't be able to use weight that's heavy enough to challenge the target musculature.

If your training goals primarily involve getting stronger, leaner, or more muscular, the exercises you perform must permit you to perform a significant amount of work, which is defined as displacing a specific mass over a given distance.

Exercises that significantly restrict (or even eliminate) the amount of work you perform are substandard for the purposes of strength and muscular development. In other words, they're pretty much useless.

Exercise That Work, Exercises That Don't

The weight training exercises that work best for most lifters (male or female) are those that move a relatively large load over a relatively great distance, with a reasonable margin of safety of course.

This is why many strength coaches and athletes over the decades have referred to the barbell squat as "the king of exercises." Some would opt for the deadlift for this title, but either way, the point is made. Additionally, more than a few experts refer to dips and pull-ups as "the upper-body squat."

Notice, though, the common characteristics of those four exercises. They permit you to safely move a large load over a large distance. And, it should be noted that all four movements challenge a large number of muscles simultaneously.

Contrast these movements with a few of the exercises we've all recently seen some women performing, both in person and on social media:

Why Do So Many Women Train This Way?

Why are female gym-goers so prone to ignoring the fact that to make significant progress you have to move a relatively large load over a great distance?

It's likely that women learn these techniques from other fitness pros, whether they be coaches or a physique competitors of some type. But assuming that this is the case, where did these fitness pros come up with such wacky notions? What's the underlying premise or rationale? Here's a stab at that mystery:

There remains a persistent, underlying myth that most conventional resistance training exercises (i.e., the ones that actually work) will only serve to masculinize women, especially if performed with heavy weights.

This pernicious error is difficult to quash. There's an overwhelming tendency to assume if we simply do what someone else does, we'll get the same results they got. The problem is, we may not possess the same genetics or take the same drugs that they do.

It's a classic case of mistaking correlation for causation. When women see the bulky physiques of high-level bodybuilders and strength athletes, it deters them from lifting weights like these women. This, of course, is a mistake.

2 Not listening to good trainers

As a coach, whenever you start with a new client, there's often a battle of wills at stake. Many clients have strong ideas about what they think they should do, and as a fitness pro, you have your own ideas as well. More often than you'd think, trainers tend to gradually acquiesce to their client's ill-informed wishes rather than taking a stand as a professional and insisting upon good decision-making.

3 Overestimating the energy cost of the exercises they do

Many men make this mistake too. It particularly applies to jumping drills, which are very strenuous and therefore create the assumption that they burn a lot of calories. And to be fair, per unit of time, many of these drills do burn more calories than other choices. There are a few problems with this thinking:

The underlying problem here is that people tend to assume that difficult or painful equals effective, even though that's often not the case at all.

4 Giving in to boredom

Truly effective training tends to be a bit on the monotonous side. This is why most successful commercial exercise programs (such as P90X) are all based on a high degree of variety. Yet the most successful weight-training programs are kinda boring by comparison.

5 Gravitating toward what they do best

It's only human nature. Women tend to be relatively better at tasks that require more mobility, endurance, and complexity, and their training tends to reflect this tendency.

For several months I've been watching a handful of male trainers at a local commercial gym. When they have a male client, they have him do legitimate, effective exercises like barbell squats, chins, RDL's, military presses, and so on.

The next client is often female. She's instructed to start by doing 10 minutes on the bike, followed by 10 minutes of foam rolling, walks with an elastic band around her knees, followed by sumo squats with a light kettlebell, a few lateral raises, and a few sets of light glute bridges.

The problems aren't limited to ineffective exercises, they also involve inadequate loading and too much time spent on low-payoff "preparatory" activities. Additionally, these trainers exude genuine enthusiasm when training their male clients, but palpable disinterest with the females, unless the client in question is particularly hot. These trainers simply don't respect and value the majority of their female clients.

There are many things that men can learn from women in the gym. For instance, guys tend to focus excessively on bar weight and not enough on movement quality, range of motion, and the mind-muscle link. Men always place quantity over quality, and often to their detriment. Not so with women.

Lastly, women often tend to think of themselves as novices when they're actually fairly knowledgeable, whereas men tend to think, simply by virtue of having a Y chromosome, that they were born knowing how to lift. The result is that women are much more open to learning than men are. 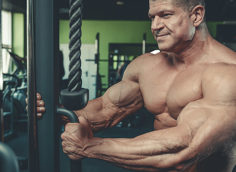 Powerlifters have the strongest triceps. Bodybuilders have the biggest biceps. Here's how to combine their training methods to build arms that are as strong as they look.
Arms, Bodybuilding, Training
Adam Bentley May 2 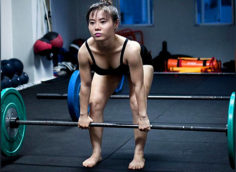 Q & A with one of the world's premier strength coaches.
Bodybuilding, Powerlifting & Strength, Question of Strength, Training
Charles Poliquin September 18