There was a time when lifters compared more than just their Big 3 numbers. Walk into most modern gyms now, however, and you won't find anyone doing anything more unusual than a dumbbell overhead press.

Perform a Turkish get-up and be prepared to answer questions about "what muscle that works." Even on the fringes of fitness training, you don't see people straying far from the basics.

Even just a few decades back, lifters were able to perform feats that today's strongest athletes would struggle with. Why? Because they weren't adverse to leaving their comfort zone.

Trying new things and learning new skills – and then getting beastly at them – were considered a measure of manhood, so strongmen were driven to devise tasks requiring such versatility and all-around strength that others would have difficulty completing them.

Challenges were issued to any man watching. Naturally, there were rarely successful takers outside of strongman circles, but within those circles, the relentless pursuit of improvement delivered constant increases in strength, health, and physique.

In one unmatched feat of strength, Arthur Saxon bent-pressed 370 pounds, with claims of having done 385. Henry Steinborn regularly squatted over 500 pounds without a squat rack. Picture how that works.

Another famous strongman, Louis Cyr, hoisted a platform of 18 men onto his back, totaling over 4,000 pounds. There are countless other accounts by both famous and less well-known strongmen that still haven't been equaled today.

It seems this sense of play has been all but abandoned, and so has the all-around strength that comes with it (except for a small group of men and women competing in the United States All Around Weightlifting Association).

Generally, pristine form is hammered home to the point that lifters are unwilling to try new movements lest they look foolish or uneducated for even a few reps.

Powerlifters find every possible way to shave a quarter-inch off a lift in effort to increase poundage. Along the way, we've relinquished the ability to do the poor-leverage, sometimes-awkward, yet always-impressive lifts of the universally strong. This article describes six of them.

Note: Before you read any further, you need to understand one thing: Some of these lifts aren't recommended for people who haven't learned basic squats and deadlifts.

You need to be strong, stable, flexible, and confident that you can control weight in what might be an awkward position. Getting hurt means losing training days, and you can't make progress if you're not training.

The Jefferson lift (or straddle deadlift) is a barbell lift that mimics picking up the famed 750-pound Dinnie Stones. No other lifts create such enormous cross-body loads. If you want abs of granite and a powerful deadlift, add the Jefferson lift to your training.

The Jefferson lift requires even more individual personalization than most other lifts. Because of the awkward, asymmetrical position and inherent anti-rotation component, you need to find the right foot and hand position to get the best leverage. For most, it will be a variation on a squat position, with the upper torso facing forward.

Your first experience with heavy Jefferson lifting will be similar to that time you ate Taco Bell in a bus station, minus the explosive diarrhea. In other words, your stomach and deep abdominal tissue will feel like they took a beating from a boxer.

The inherent challenge of holding onto these implements led to the development of even bigger, heavier 'bells that strongmen used to challenge themselves and others. The most famous of these is the 172-pound, 9-ounce Thomas Inch dumbbell with its 2 3/8ths-inch diameter handle.

Recently there's been an influx of silicon grips that fix onto normal-sized handles. The most popular of these, Fat Gripz, are an excellent tool to train for thick-handle dumbbell lifting.

Combining this cheap and simple tool with readily available two-inch axles like the IronMind Apollon's Axle can be all you need to prepare yourself for lifting the notorious Inch.

There are three lifts that provide just about all you need to take full advantage of the fat handle: the deadlift, clean and press, and snatch.

Naturally, you'll be able to deadlift the most, usually clean and press quite a bit less, and snatch the least. Working on all three lifts will give you several ranges of motion and feelings of acceleration that will improve your thumb and hand strength. 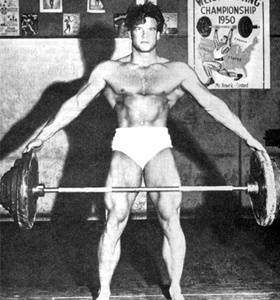 To perform a Reeves deadlift, load the bar with standard 45-pound plates with the flat side facing in. Standing in the middle of the bar, grab the 45's with the fingertips of your outstretched arms and perform a standard deadlift.

Most big deadlifters would agree that one of the best ways to build a big deadlift is to augment your deadlifting volume with more volume. One can only handle so much deadlifting (although it's probably more than you think you can), so the real key is to increase the variety of ways in which you pick shit off the floor (PSOTF).

Adding the Reeves deadlift to your training, which is primarily limited by hand and arm strength, is a way to double or triple the number of reps you have of PSOTF.

To say that Henry "Milo" Steinborn would be disgusted by what passes for modern training and equipment is probably a gross understatement. This is a man who dismissed the use of a squat rack entirely.

In what was probably his most famous feat of strength, Steinborn, dressed in a neatly pressed suit and tie at the 1950 World's Fair, lifted an 800-pound elephant. By the time he reached his seventies he was still squatting over 400 pounds.

To rack a bar in the style of the great Steinborn, first upend the loaded bar so that it rests on one end. From there, position yourself in such a way that you can tip the bar onto your back, typically into a deep squat position. Then stand up with it.

Once standing upright, you can squat as normal. Dropping the bar at the conclusion of the set would be ungentlemanly, so replace the bar the way you picked it up, by tipping it down on one end first, standing it upright, and then gently lowering it down to the ground.

A word to the wise: A bar with center knurling will remove flesh and leave its mark, making it clear you've been doing some unconventional lifting.

Furthermore, if your gym floor isn't soft rubber that will hold the bar end safely in position, have a partner use his foot to block the bar end.

Think of this lift as a Turkish get-up for the truly strong.

The one-arm hack squat is a lift that builds full-body strength and grip strength. In my experience, only a small percentage of people have the correct leverage for a heavy hack squat (or behind-the-back deadlift). Using only one arm, however, allows for more variation in position and opens up this unique leverage to virtually anyone.

The challenge of holding onto a heavy barbell with one hand makes grip strength the limiting factor for most, but the strength required to lift behind your back still makes it a worthy addition to your rotation. Don't underestimate the carry-over of grip strength to your regular deadlifting. You can only lift what you can hold on to.

Set up with the center of a barbell behind you in a slightly offset position so it's centered on your lifting hand rather than your body. Bending down as you would in a deadlift, reach backward, grip the bar, and lift it off the floor. Pay no mind to any rotation or tilting of the barbell. Your concern is lifting ever more weight, not being scored for strictness.

This lift is also known as the Russian hockey deadlift, which is normally used in rehab situations. It could also be called "the lift that has the ability to give Dr. Stuart McGill a stroke," especially when the loads used approach a typical man's one-rep max.

The goal of a rotational deadlift is to pick up a heavy barbell from the side instead of directly in front as in a normal deadlift. To do this, bend at the hips and rotate nearly 90 degrees. Once standing upright, set the weight back down on the opposite side.

I've found that an EZ-Curl bar is a great implement for this lift. The shorter bar is nicer because a 7-foot barbell takes a long time to accelerate and decelerate in rotation, and the odd hand position of the EZ-curl bar feels much better than a barbell in this instance.

It's not worth spilling too many words on how to program these lifts. Much has been written, even by many of the old time strongmen themselves, and you'll find common threads despite some disagreement.

The most common thread is to follow your instincts, train as if you were playing with the weights, and continually move forward. Don't get hung up on sets and reps. Most of these lifts are extremely challenging, so keep it light if you're doing them for the first time, and get the hang of a movement before going crazy with the load.

One of the training tenets that I've changed my mind about recently is the idea of never failing at a lift. I added 200 pounds to my deadlift – bringing it up to 600 pounds – without failing a rep, and I held on to this idea dearly. Watching my training partner Adam T. Glass declare a jihad on the Thomas Inch dumbbell, however, changed my opinion forever.

Adam would repeatedly do what most people would call failing: lifting the dumbbell only a quarter inch off the ground at a time. In what's probably the shortest amount of time ever, less than a year, Adam has gone from not being able to lift the Inch dumbbell to absolutely dominating the Inch and other, even heavier, challenge 'bells. Within a few more months, he'll be the lightest (and fifth ever) person to clean and press the Inch dumbbell.

So don't be afraid to fail, if failing moves you closer to your goal.

Master the Romanian deadlift. Here's are two things you gotta do to get it right.
Exercise Coaching, Tips
Drew Murphy February 17

This is really going to hurt, but you'll love the results you'll get in chest and triceps growth. Try these two exercises.
Tips, Training
Michael Warren June 9

Cressey doesn't miss anything. Stuff he didn't miss in 2010 includes the myth of symmetry, zones of convergence, the complete overuse of barefoot training, and the dangers of zits.
Training
Eric Cressey February 25