When it comes to complex topics like training, there are things you know, things you don't know, and things you know but forgot how important they are. Here then, are six such reminders:

That's right, muscle will be ready to train again in two days, which means if you wait any longer than this to hit that muscle again, you're losing ground.

It's not that "bro splits" (where you train each muscle group hard once per week) don't work, it's that they don't work as well as other approaches, at least for most people.

Now sure, if you happen to be Big Ramy or some other similarly huge lifter who regularly squats in the 700-800 range and benches north of 500, okay, maybe it takes your muscles a week to recover. The rest of us only need a day or two until we're ready to hit that muscle again, and if we don't, we'll start losing our previously-acquired gains.

Think of it this way: The bigger a muscle is, the more damage it sustains during training and the longer it'll take to recover from that damage. You probably already know intuitively that your biceps recover faster than your hamstrings, for example.

This reality is the rationale behind my recommendation for 3 "whole body" sessions per week for most lifters. The best approach involves doing a squat, push, hinge, and pull movement, along with 1-2 optional movement for smaller muscles such as arms and calves, each workout.

Sometimes when you're trying to improve your understanding of a concept, it helps to imagine the extremes, so let's apply that to training frequency.

If I were to suggest that you should only train once a week, you'd probably (and rightly) doubt my credibility, because that workout would probably take 4-6 hours, at least if you were trying to do enough work for every muscle group. So once a week is obviously a non-starter.

Now consider the opposite extreme: Imagine training 14 times per week. I guess the upside is that each workout would be super short, allowing you to impart maximum intensity into each training session, so there's that at least. But the obvious problem is that it hardly makes sense to drive to the gym twice per day for only a couple of sets.

Somewhere between these two extremes is the optimal training frequency, and this depends largely on how much total work you're doing each week. Put another way, if you need to do 16 sets for hamstrings each week in order for them to grow, you probably wouldn't train hamstrings once a week, but you also wouldn't train them 8 times a week. It turns out that 3-4 times per week tends to be the sweet spot for most lifters.

Bottom line, it's not frequency, but VOLUME that drives muscular growth, so simply use a frequency that makes it easiest to hit your optimal volume.

Most of us already understand the principle of progressive overload, but we're all prone to under-appreciating its importance in real world application, especially when those weights get heavy.

We often think we're progressing when we're not. Look back through your training journal and see if your weights for sets of 8-10 have improved on key lifts over the past few months. If they haven't, you haven't gained any appreciable muscle.

When your numbers get bigger, YOU get bigger, so know your benchmarks and make regular attempts to exceed them. As T Nation contributor Mark Rippetoe loves to say, "Hard and simple are the keys to big and strong."

I often bring up this point with female clients who have reservations about lifting making them too muscular, but it's a critical concept to understand for almost anyone who lifts.

There are a few "sub concepts" to this point. First, you can't gain muscle without extra calories, and you can't lose fat without "insufficient" calories, no matter how sound your training might be.

Secondly, when dieting/cutting, the entire point of lifting is to prevent or minimize the loss of muscle while enduring an energy deficit. So it only stands to reason that the best training to prevent muscle loss happens to be the same training approach you'd use for muscle GAIN.

If you've ever heard the phrase "you can't out-train a bad diet," this is largely what it means. Training and nutrition are like two sides of the same coin: Training creates the stimulus, and nutrition provides the energy for, and recovery from, that training.

Now, we all have an occasional "off" day due to poor sleep, stress, or other factors, but as a general trend, if you're getting stronger, you're gaining muscle. This isn't exactly a free and easy way to test your body composition, but it certainly helps let you know if you're gaining, losing, or maintaining your present degree of muscle mass.

Italian economist Vilfredo Pareto might be one of the least-appreciated geniuses in history. His brainchild, The Pareto Principle states that for almost all endeavors and processes, 20% of the inputs lead to 80% of the outputs. Yep, this is the 80/20 rule.

In gym-practice, this simply means that doing one hard set provides roughly 80% of the benefit of 3-4 sets (give or take). Put another way, we're talking about the law of diminishing returns. Yes, each additional set leads to more benefit, but those benefits dwindle significantly with each new set.

If you cultivate a deep appreciation for this idea, it can come in really handy, especially when time and energy are in short supply. Just as an example, if you're short on time and high on stress, knowing that 1-2 hard sets is almost as good as 4-5 will encourage you to get in a quick workout rather than bailing out altogether.

Reg Park, the guy who inspired Arnold, knew how to build strength and symmetry. Here’s what we can still learn from him today.
Bodybuilding, Powerlifting & Strength, Training
Mike Mahler August 19 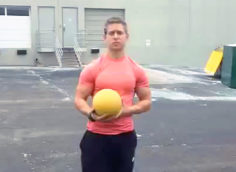 To do this correctly, resist forward flexion and stay more upright.
Athletic Performance, Exercise Coaching, Tips
Eric Bach June 18
Since the beginning of time, mankind's argued, debated, and beat each other over the head with sticks, all in an effort to figure out who's right.
Training
Paul Chek September 21
A Glute-Dominant Workout for Increased Strength
Training
John Romaniello December 20