When muscle growth comes to a screeching halt there are dozens of plateau-busting training tactics – anything from technical improvements and rest-pause training to recovery and dietary changes. They can all help you make progress faster, but one training tactic may stand above them all – drop sets.

Drop sets are an advanced muscle building tactic where you perform a heavy, near failure set, decrease the weight, and continue training until you reach technical or muscular failure.

A Brief History of Drop Sets

The earliest known use of drop sets, called the "Multi-Poundage System," originated in 1947 by Henry Atkins. Atkins firmly believed that the final few reps in a set had the greatest value when it came to building muscle.

Though he didn't have the science to back it up at the time, he was on to something. The last few reps of a set have the highest metabolic stress, a key driver for muscle growth.

When you combine heavy, high-tension weight training with skin-splitting metabolic stress, you have the perfect recipe for rapid muscle growth. (1)

This one's probably the most commonly used in gyms across the world. After your final working set, you'll strip off about 15-20% of the load, catch your breath, and get back to work for another few reps.

Once you hit the point of technical failure, when you can no longer lift with pristine technique, stripe off another plate from each side and repeat. Do 3 strip sets.

These are also called the "halving" method. Use this particular drop set after a low-rep, heavy load exercise.

After your final working set, strip off 50% of the weight. Give yourself 15 seconds of rest and lift the weight as many times as you can before failure.

Repeat this process one more time after the initial 50% drop. Naturally, by halving the weight twice, your last drop set will be a weight you probably haven't put on the bar since you first stumbled into the gym. But it actually won't be as easy as it sounds since you'll be going to failure. It's high-tension weight training along with joint-friendly, skin-splitting pump.

These were a favorite of the first ever Mr. Olympia, Larry Scott. He was a firm believer that the fastest track to massive muscle was lifting heavy weight with few reps, every time.

Power drop sets won't give you as much of a pump as the others will, however, it'll encourage strength gains while improving muscle density. Unlike the halving method, you'll only decrease the weight after your final working set by 10%. Because the weights will be heavier, keep a spotter nearby.

Descending drop sets decrease the reps on each set while decreasing the weight only by teeny increments. So your load stays close to what it was at the beginning of the drop set.

Because the reps of the descending drop sets are already pre-planned with this particular pattern (12, 8, 4, 2), you'll want to hit 12 reps on your final working set. Then reduce the weight by 5% every set thereafter with 15-30 seconds of rest between sets. (Just round the numbers up or down as needed.)

Example: Complete your final rep using 225 pounds on the bench press (12 reps), then...

Most people shy away from the zero-rest drop sets because of how challenging they are. The goal here is to get your rest time in between your final set and your drop sets as close to 00:00 as possible.

To do an honest zero-rest drop set you'll need a spotter... and maybe a puke bucket. I recommend using full 45 or 25 pound weight plates that are easy to strip off the bar. Aim for speed between sets, not necessarily precision in load percentages.

Example: Complete your final rep using 365 pounds on the bench press, then...

This is an excellent drop set for a de-load week, and if you have a lagging muscle group this technique is awesome for combining both heavy compound lifts and lighter pump work. Now, keep in mind that unlike the others, drop super sets make up the entire set.

First, select two exercises to do during this drop set. Stick with a weight with which you can complete between 18-15 reps. Aim to keep your rest time between 0-15 seconds.

Since most lifters won't skip chest training, come hell or high water, we'll keep our focus there for both exercises. This example uses a barbell bench press with a cable chest flye – a potent chest-building combo.

Here's how it works:

These drop sets will help you blow any muscle-building plateau to smithereens. Add a couple of these to your workout routine for the next month, shock your muscles for even more growth, then go back to your typical training cycle. 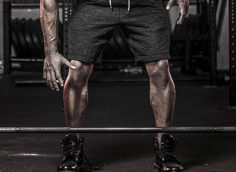