Significantly improve the results you get from weight training... starting right now. Here's how.

There are countless examples of elite performers in all fields who do all sorts of things wrong and yet still manage to succeed. In fact, pretty much the only thing that high achievers have in common is their work ethic. (Sure, genetics too, but why worry about things you have no control over?)

Much more often than not, laziness takes the disguise of paralysis by analysis. Guys think the problem is that they're not using the "perfect" diet, training program, or recovery strategies, when in reality their real issue is not working hard enough on a consistent basis. That's not very sexy, but the truth rarely is.

Everyone assumes their technique is good. If you have a coach or a training partner to keep you honest, perfect. But if not, you'll need to be your own worst critic.

When it comes to lifting technique, the overriding goal is to maximally stress the muscle while minimally stressing that muscle's associated joints and connective tissues. While the details of exercise technique are specific to the exercise being performed, there are a few general principles that should be applied:

In reality, he's not getting stronger at all, but rather progressively reducing the challenge through various biomechanical shortcuts. This all-too-common phenomenon never takes you anywhere you want to go.

One final note about technique: I totally get the desire to do whatever it takes to put more weight on the bar, but if you use suboptimal technique you'll need more weight to achieve the same end result, which means you're creating unnecessary wear and tear on your joints. Please feel free to explain to me why this is a good idea.

It's commonly advised that as a lifter, you must "do what you need, not what you like." Wrong. You should do both.

Look, we all have our individual talents. Some guys have a great bench, others might have insane mobility, while still others might be freaky lean. It's only natural to take pride in the things you do well, and let's face it, doing these things is often what keeps you in the game long-term.

So by all means continue to work on your strengths, because that's what'll keep you motivated to train in the first place. But just as importantly, don't ignore your weaknesses, especially if they threaten to limit your progress long-term.

As an example, many lifters ignore mobility. Unlike lifting, which provides immediate and tangible rewards, the results of mobility work often take weeks, months, or even years to realize. So if you're not great at delaying gratification, it'll be difficult to convince yourself to do the work on a consistent basis.

If that sounds familiar, here are a few actionable ideas to make that pill go down a little easier:

We've all conditioned ourselves to do various things that aren't exactly enjoyable, like flossing our teeth, wearing seatbelts, etc., because we understand the downstream consequences of not doing them. Whatever your weaknesses are in the fitness sphere, think of them in that same light.

4 – Ignore Progression At Your Peril

Successful training has two requirements – it must be hard, and it must constantly get harder. It's the second part that a lot of people miss. I often joke to my clients that "no one ever got freakishly lean, muscular, or strong by accident."

There are rare exceptions, but the point is, if you want to be great you're going to have to force the issue. If your best set of 5 on the deadlift is 445, you're not going to be any bigger or stronger until you bump that up to 450x5. Oh, that's hard? Exactly. That's why there aren't a lot of freakishly lean, muscular, and strong people.

Progression is the price we must be willing to pay for greatness. It can take the form of maximum weights moved, average weekly training volumes, or both. If your much bigger, stronger training partner typically lifts 150,000 pounds a week, but your typical volume is 80,000, you now know how much work you'll need to do to look like he does.

Because progressive overload is so difficult to enforce long-term, many lifters gradually pick up habits that make them think they're progressing when they're really not.

Changing exercises too often (sometimes every session) is one example of this self-deception. Gradually and progressively cutting range of motion as things get more difficult is another. The most successful lifters are relentlessly self-aware and hard on themselves. That's a mindset you should strive to emulate.

The most successful training and nutrition habits are, well, boring. They're remarkably devoid of drama, magic techniques, esoteric equipment, and any type of "secrets."

As Steven Pressfield brilliantly articulates in The War Of Art, whenever you endeavor to go from a lower plane of development to a higher level, you'll encounter (what he calls) "The Resistance." This invisible, subtle force can take many forms including excuse-making, procrastination, and self-doubt, but its singular goal is to prevent you from reaching your goals.

This resistance must be fought at every turn, and there are no tricks or shortcuts. It just comes down to making peace with discomfort. View it as a necessity, not a nuisance, because as the saying goes, "There is the discomfort of discipline, and the pain of regret."

You're going to experience one of them, so which will it be?

Are you using bad form on back exercises without even realizing it? This little trick will fix that, and help you build a bigger back.
Back, Exercise Coaching, Tips
Kurt Weber June 5 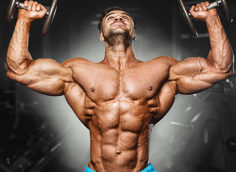 Have injuries or poor mobility made overhead pressing painful? No worries. Here are four ways to build your shoulders without pissing them off.
Training
Adam Vogel July 29

Want a better body? You need to get good at strict pull-ups. And that means no kipping.
Bodybuilding, Pull-Up, Training
Christian Thibaudeau October 27