There comes a point when every lifter hits a plateau, but getting past it doesn't always require major changes. Sometimes all it takes is a subtle tweak or two. Small hinges swing big doors.

That's where these add-ins come in. They take hardly any time to do, yet they’ll help you get bigger, stronger, and more resilient – without interfering with your regular training.

If your warm-up consists of nothing more than a light set or two before you start your big lift of the day, it's only a matter of time until your joints start to get angry.

The solution: Pick two exercises – one high-velocity movement and one movement to prime your posterior chain – and alternate between them for five minutes. The goal is to accumulate as many good reps as possible without accruing much fatigue.

Pick exercises based on your primary lift of the day. The power-based movement should mimic the main lift's movement pattern. The primer should target the glutes and hamstrings prior to squatting/hinging, or the upper back prior to pressing. Examples:

In terms of volume, stay at the lower end of the spectrum for the power movement – between 3-5 reps is plenty – to avoid getting fatigued. Conversely, feel free to ramp up the reps on the primer. A slight pump in the posterior chain can enhance performance due to the increased involvement of the stabilizing musculature.

Here's why power-primer supersets are so valuable:

The benefits of the primer are more straightforward, but the premise is that activating the commonly inactive muscles of the posterior chain prior to training will facilitate better positions and smoother sequencing on subsequent lifts.

Plus, high-rep posterior chain work is a good way to battle back against the caveman posture and gluteal amnesia caused by sitting.

Time: None (Sort Of)

Fillers are low-level mobility, stability, or activation drills you can plug in between sets of a heavy strength or power exercise. Their purpose is to make the most out of rest periods while targeting weak links, addressing mobility deficiencies, and/or working on stability issues that might manifest while training.

The key is to choose low-level fillers that aren't strenuous enough to interfere with the primary exercise. Choose the best option for your needs. If you have poor motor control or hypermobile joints, you might benefit the most from stability and activation-based drills. But if you're feeling tight in certain areas you may need extra mobility work to open up stiff areas.

Depending on the primary lift, here are a few options:

Another option is to include a light, non-competing exercise geared towards bringing up a lagging body part – say, band pushdowns between sets of deadlifts, or calf raises between sets of bench pressing.

The same idea can apply if you have certain problem areas that cause pain or dysfunction. Just plug and play specific correctives as needed.

Loaded carries are one of the best ways to build full-body strength, pack on muscle, drop fat fast, and show off your physical prowess whenever your buddies need help moving their refrigerators. Still, most lifters fail to include carries in their programs.

The solution: Do loaded carries as a finisher twice a week. Regardless of the variation, the simple act of picking up heavy objects and walking around with them has a number of unparalleled benefits. The best part? It doesn't have to take more than three minutes.

The key is to pick a variation that's in line with your goals and adjust load and duration appropriately.

If your goal is strength, pick a variation that enables you to pack on the plates (like trap bar carries) and do 3-4 sets of 20-30 seconds. If your goal is to build muscle or boost fat loss, choose an option from the list below and set a timer for 2-3 minutes. Walk as far as possible within those 2-3 minutes, resting only as needed.

After finishing a workout, most lifters book it out of the gym. The problem is, by skipping the "cool down" process, they're missing out on the benefits of the nervous system as it relates to recovery. They not only crash and burn a few hours after training, but also greatly diminish their ability to recover.

The solution: Post-workout parasympathetic breathing is the secret to kick-starting the process. Recovery can (and should) begin the minute after you complete your last rep.

Before you dismiss post-workout parasympathetic breathing as a fluffy activity reserved for hippies, at least listen to Dave Tate, who said that it's "the most effective method I've ever used to instantly aid in recovery." Sold yet?

Here's how to embrace your inner monk:

The sympathetic nervous system's purpose is to trigger the body's "fight or flight" response, which is beneficial – and quite necessary – for maximizing short-term performance while you train. However, remaining in a sympathetic state for too long can be detrimental to recovery since it's correlated with fatigue, injury, burnout, and inflammation.

On the flipside, the parasympathetic nervous system is responsible for the "rest and digest" shift which spurs on a physiological triad of rest, recovery, and regeneration.

The key to harnessing the power of the ANS is to fire up the sympathetic nervous system before you train – which can be done quite easily – and then shift into a parasympathetic state as soon as you finish, which is where breathing comes into play.

The sooner you're able to make this shift after training, the better your recovery will be.

High-rep band work is one of the most overlooked ways to supercharge your results in minimal time. The best part? Band work causes hardly any muscle damage and places virtually zero stress on the nervous system, which means it can be done anywhere and at any time without robbing any of your training capacity.

The solution: Throw band work into your warm-up, sprinkle it into your workouts, use it as a finisher, or get a pump in on your off days... because why not?

It's important to remember that the purpose is to "feel" the working muscle(s), not to chase progressive overload. Focus on accumulating time under tension with sets of 20-plus reps.

If your goal is to target a lagging body part or build up a weak link, try accumulating 100 total reps of a targeted exercise after you train and on your off days. If used as part of a warm-up, doing 2-3 sets of 20-25 reps should do the trick. Here are some options:

New views on the myth of steroids, the myth of overtraining, and the myth that Swiss balls are for pussies.
Bodybuilding, Training
Nate Green May 21
One of the most common areas of confusion for bodybuilders and other athletes engaged in resistance training is the question of the appropriate or optimal number of reps and sets for any given workout session or cycle.
Training
Charles Staley October 27 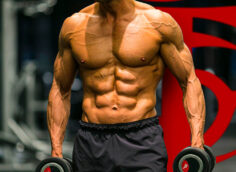 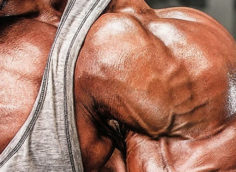 Use the classic 21's method, normally reserved for biceps, to finally add some size to your delts. Here's how.
Bodybuilding, Shoulders, Tips, Training
Nick Tumminello October 13