Hamstrings are often an afterthought. As a result, most people have hamstrings that are woefully lacking in both size and strength.

Here's a simple, five-step recipe for building hamstrings that look great, perform at their peak, and might even help you to touch those toes again. Just choose the exercises that sound appealing to you and follow the set and rep instructions, completing all five steps in one workout.

The mind-muscle connection is that feeling you get deep inside your muscle when you squeeze at the top of a biceps curl or lock out at the end of a leg extension.

Certain muscles lend themselves to this type of sensory connection – they hold a pump, get the stretch, or are just easy to feel when they're working. For most, the hamstrings aren't those muscles, especially when we're talking about feeling them working during compound movements like deadlifts or squats.

The fix? Hit a few hamstring isolation exercises specifically designed to reinforce sensory awareness and connection before moving on to bigger, multiple-joint exercises.

I know they're not particularly exciting, but you need to choose just ONE of the following exercises for 1-3 sets of 5-8 reps:

Learning how to engage the hamstrings in isolation lays the biomechanical foundation for their use in complex movements like hinging and running.

The traditional hip bridge, where you push through the heel and lift your hips as high as possible, targets the glutes. Here we're using the mid-range of knee flexion – about 130-150 degrees – combined with a co-contraction of the calves, to activate the hamstrings in a way that mimics running, making for a more real-life exercise for athletic carryover.

Most people spend the majority of their workout at the force end of the force-velocity curve, focusing more on lifting progressively heavier weights (force) than increasing bar speed (velocity).

That's fine if your primary goal is hypertrophy, but it also leads to one-dimensional muscular development that doesn't carry over into performance. Somewhere in the middle – between strength and speed – is a "sweet spot" where a respectably heavy weight is lifted at an impressively fast speed.

That's where peak-power exercises live – bridging the gap between true warm-up exercises and the heavy stuff ahead. Pick ONE or TWO of the following exercises and do 1-3 sets for 5-10 reps at maximal speed:

Long jumps move along a horizontal axis, eccentrically lengthening the hamstrings along the lines of a hinge (unlike a box jump, which travels on a vertical path).

This is all about integrating the lower back, glutes, and shoulders into a single, fast, explosive concentric contraction. It's best to do this one outdoors, especially if the gym has a chandelier.

Kettlebells can be a great tool for power development, marrying rapid speeds to weight, and activating the stretch-shortening cycle for a forceful concentric contraction. Here we're using them as a ballistic exercise – similar to a medball toss, but heavier and without leaving your feet.

Muscles grow in direct response to mechanical tension. That means you have to load up the weight and grind out reps. Stick with compound, bilateral lifts for maximal loading and recruitment. You'll have time to be fancy later.

Chose ONE exercise below for 1-3 sets. Keep the reps in the 5-10 range for hypertrophy.

The advantage of using a straight bar is the ability to load heavy weights and maximally recruit the hamstrings. The drawback is increased strain on your lower back, which isn't a big deal for most people, but can be a non-starter for some.

The advantage of the trap bar? Heavy loading capability with minimal back involvement and a strong carryover to athletic performance. True, the position generally pulls the quadriceps into the exercise more than the traditional deadlift, but depending on your injury history and tolerance to back extensor loads, that's often a trade worth making.

The RDL is often chocked up as an accessory exercise, but that's wrong. No other deadlift variation comes close to matching the feeling – the stretch and subsequent contraction – you get from a set of heavy RDLs. Remember, muscle hypertrophy is a local phenomenon, so if growing hamstrings is the goal, RDLs hit the bull's eye every time.

Here's your chance to get creative. Lighten the load a bit; play around with different angles, force vectors and exercises; and accumulate tissue-specific volume. Chose ONE or TWO exercises below for 3-5 sets. Shoot for 8-12 reps.

This variation of the traditional RDL places the back foot against a wall for added stability, thereby neutralizing the balance challenges a lot of people seem to face with this exercise.

One of the biggest mistakes with hamstring curls is excessively arching the lower back as the knee goes into flexion. This flexes the hip and rolls the pelvis forward, putting the hamstrings in an overly lengthened position where they can't produce force effectively.

To combat this, shove a BOSU ball – yeah, that thing – under your stomach to keep your back in flexion and your hips in extension where the hamstrings can work maximally to flex the knee.

The eccentric, or breaking action, of the hamstring is important for sprinting, bounding, and jumping, but often gets neglected. Not only that, but eccentric exercises build massive amounts of strength that help to bolster your numbers on the bar.

No need to overcomplicate this one. They're already hard though, maybe too hard for most people. If you need assistance, string a band around the top of a squat cage for extra help.

Capacity is the ability to maintain form and motor control under fatigue. The problem is that most high-rep endurance exercises target the quads to a far greater extent than the hamstrings, so you have to be strategic.

Chose ONE of the exercises below. Alternate between the two choices every workout. Pick a fixed distance and start with 8-10 sets. Increase the volume by 2 sets a week.

Most people associate quads and calves with sled pushes, but you can easily shift the focus of the exercise to hamstrings. First, pull your rib cage down and back and roll your tailbone under you – the same way you would during an abdominal plank. This will put the hamstrings in a better position to work.

Next, push the floor away through the heel, instead of the forefoot, to keep the hamstrings on task.

Sprints are the ultimate test of hamstring strength and athleticism. They build explosive power, connective tissue elasticity, muscular stiffness, and reflexive control over the rib cage and pelvis. If repeated, they also build cardio-respiratory fitness, giving you a bigger engine and improving your ability to recover between workouts.

Trouble is, sprints can also be risky, especially if you haven't done them in a while, so start with 50-75% effort and save the top-end stuff until you're ready for it (usually by the fourth or fifth workout). Even then, save 100% effort for the last few reps.

Hamstring training is an important part of a well-rounded program, but most people screw it up with haphazard exercises or undershoot the target with insufficient volume. Follow this five-step template like a recipe in a cookbook, adjusting the amount of time or number of exercises you choose at each step to meet your goals.

Alwyn Cosgrove kicked cancer's ass. Twice. Of course, those of us who know him expected nothing else. Find out what makes this remarkable guy tick, or more importantly, find out what ticks him off.
Training
Nate Green November 22 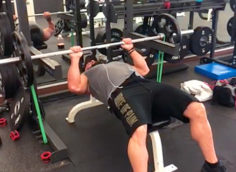