The common approach to weak body part training is to annihilate the muscle from all angles 3 to 6 times a week. While this may work in the short term, your joints will quickly start to revolt.

Instead, you need to figure out why the body part is weak before planning your attack. To help you out, here are the five main reasons you have a lagging muscle group, along with the solutions to each. What you’ll notice is that none of the strategies involve adding volume, intensity, or frequency.

1 – The Muscle is Just Plain Weak

Sometimes a lagging muscle group is small because it’s weak. Here’s a really simple way of bringing up a weak body part:

It may not need to be any more complicated than that.

We’re naturally drawn to what we’re good at, and after a while we tend to start neglecting things we suck at or don’t enjoy.

For example, Adam Hayley, a national level bodybuilder, is a great bench presser. Because of his structure, it comes naturally to him and he can shift a lot of weight. But what he really sucked at for years was bentover rowing and chin-ups. And his back development reflected this.

The cause of this, of course, was that he preferred benching to rowing, so when I took over his programming we started prioritizing rowing and chin-ups. Sure enough, his back started growing.

In my own case, my weakness has always been, and still is, my calves. While I may complain about how it’s all because of genetics, the truth is that I’ve never given them the true attention they need. I’ve always neglected them and treated them like an afterthought. For the past few months I’ve trained them for 10 to 15 minutes at the start of leg sessions and that’s worked extraordinarily well.

To summarize, embrace what you suck at.

If you want to stimulate a muscle to grow, you need to be able to feel it. No mind-muscle connection, no growth.

Vince Gironda knew this back in the 1950s and he had a method of counting to six in the contracted position of an exercise in order to “strengthen the nerve force.” For example, do a curl and pause at the top for 6 seconds. Squeeze the biceps hard!

Gironda believed that a strong nerve impulse to a muscle translated to a larger, stronger muscle with a better blood supply, and that only after you developed this connection with extended isometrics should you move on to more traditional rep schemes and tempos. There are a few ways you can implement this:

Do some isometrics on the body part you’re about to train at the start of the session and in-between your warm-up sets. Let’s take hamstrings as an example. Before you start training them, just focus on flexing the hams hard for 6-8 seconds to activate them.

Then, when you start doing your warm-up sets on leg curls, hold each rep at the top for a few seconds and continue flexing between sets. By the time you reach your top sets, your hamstrings should be full of blood and you’ll have a strong enough nerve-muscle connection to make the heavy work truly productive. 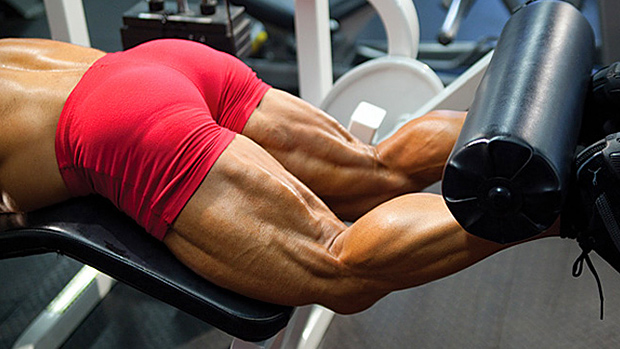 When organizing exercises within a workout, the normal method is to start with your compound exercises and then finish with isolation work. The problem with doing compound lifts when targeting weak body parts is that other secondary, stronger muscle groups will always take over.

For example, if hamstrings are a weak point of yours, you typically won’t be able to feel them when doing lifts like Romanian deadlifts. However, if you were to isolate the hamstrings first with leg curls, combined with the isometrics in between, you’ll get a much greater connection to your hamstrings when it’s time for the compound work. Now you’ll be able to move heavy loads and keep muscle tension where it needs to be.

One of the best ways to enhance mind-muscle connection to a weak area is to extend the eccentric (lowering) part of the movement to at least 3-6 seconds on every rep. There are a few benefits to this:

In some cases, it’s often not the muscle in question that’s the issue. Structural balance is an overlooked factor in building a physique, but it can play a significant part in addressing lagging muscle groups.

For example, many lifters struggle to build their chests because they lack stability and strength in the small muscles that stabilize the scapula, like the lower trapezius. When they press, they’re unable to depress their shoulder blades and keep their chest up. As a result, the stress is taken off the chest and placed instead onto the shoulders.

This is where spending time doing activation drills such as wall slides and band pull-aparts can be useful in setting you up to press in an effective manner for chest development.

So, look not only at the “weak” body part, but also at the muscles surrounding it to see if structural balance is the issue. Remember, the body is clever and will always opt for homeostasis.

When training for muscle growth, you need to pick the right exercises for YOUR body type. And to figure out if it’s right for you, it needs to fulfill the following three criteria:

No exercise is indispensable, so the typical squat/bench/deadlift may not always be the answer for your body. For example, I back-squatted religiously 2 to 3 times a week for my first 5 to 7 years of training. Regardless, I had poor thigh development. It wasn’t until a back injury forced me to switch to front squats, hack squats, and leg presses that they finally started growing.

When I consider my structure, it makes sense. I’ve got long tibias and fibulas with a short torso, which makes back squatting for quad development a poor choice.

A more famous example is that of Dorian Yates, six-time Mr. Olympia, who realized early on that back squatting wasn’t doing anything for him besides giving him hip issues. When he switched to Smith machine squats, hacks, and leg presses, his legs blew up.

Picking the right exercises is critical for physique development. And sometimes it’ll even require a little creativity and thinking outside of the box. Doing the same thing over and over will lead to the same sub-par results.

Before adding more volume, intensity or frequency, first ask yourself these questions and answer them honestly: