Unrealistic Numbers vs. Your Self Esteem

There are a lot of guidelines out there that tell you how much weight you should be able to lift. The trouble is, they're not generally realistic. In fact, they make a lot of people feel like they've been doing something wrong.

"Bench press 225 for 25 reps" is fine for an NFL draftee, but it's not realistic for the average guy who likes lifting but doesn't have 10 million dollar first-round genetics. Sure, some of these strength standards are great to achieve, but they can easily make a lifter feel like a fried turd if he can't reach them, despite the fact that he's in great shape.

Here are the things no one talks about:

In short, your self esteem shouldn't be wrapped up in achieving a haphazard 2x bodyweight squat (usually performed with less depth than a Kardashian memoir).

It's time to drop the stigma that comes with training for reps in the gym. Doing a higher number of reps isn't going to cause injury from fatigue, given correct loading. I have a very tough time recalling the last time I heard someone get a serious injury from a set of 10 reps, compared to the amount of times people reach Snap City attempting a heavy single or double.

More importantly, let's not act like all of the benefits heavy barbell training provides (such as added bone density, increased testosterone, increased strength, and good neural stress) magically go out the window the second we decide to lift for reps.

Moving an appreciable load in any direction will make us strong, period, and in most cases it's much more applicable to real world scenarios. We're much more likely to end up testing the muscular endurance of our deadlift pattern in life before we test anything close to our supposed maxes.

Training for a heavy single or double usually only makes you more skilled at that particular task, and not much else. That's a choice you should think about carefully.

Given all that, here are some sane, realistic strength standards. They might not earn you any bragging rights among the sports elite, but meeting them will still put you in the top 1% of all humans, strength-wise, and that ain't bad.

Ten reps may sound like tiddlywinks, but the amount of people who can do them is miniscule. Good technique requires a start from (and return to) a full hang – no kipping – a scapular depression, and a pull until the face reaches the bar.

Finding someone at the gym who follows all of these rules for one rep and can repeat it 9 more times is like finding a unicorn. If form doesn't break down towards the end of a set, the range of motion surely shortens, and the body begins to tremble like a leaf.

One of the biggest testaments to true strength is just how well a lifter can control his bodyweight when fatigued, especially during the eccentric or lowering portion of a movement. Lifts like chins, hanging leg raises, and dips can expose a lack of intrinsic muscle strength and poor muscular endurance of stabilizing groups like the abs, lower traps, and glutes. Each rep should follow the same path as the last one. If it doesn't, you're not there yet.

If you can't perform 10 good, honest chin-ups or pull-ups, you're not strong enough yet, or you could stand to lose some weight. Or both. Really.

This will be the hardest standard to attain, and the one most mouth breathers in the comment threads will lie about achieving with ease. When people do train or post their "heavy" strict press, they usually use more body English than a Beyonce video.

Regardless of your weight, a triple three-fourths bodyweight strict press is something to be proud of and a true testament to your body complexes working together and in the right rhythm.

If the number sounds daunting, believe me, it's attainable. For my bodyweight, it means a triple at about 185 pounds.

Focus on minimal lumbar extension, a full range of motion to the collarbone, and a spine-under-the-bar lockout position.

Front squat, back squat, you name it. I don't care what variation you choose, if you can't squat to your skeletal full depth with your bodyweight on the bar for a set of 6, you've got some work to do.

This is a fair gauge for lifters of various bodyweights and sizes. Clearly, a 180-pound guy is going to have an easier time reaching this goal than a 290-pound guy will. But once again, it'll reflect either a need to increase strength or a need to decrease body fat until you're at a weight that supports such goals.

If you're big and heavy, you'd better be strong enough to match your weight on the squat bar and still be serviceable at basic bodyweight training. If you aren't, it's time to ask yourself why.

Almost exactly one year ago, I was in a wheelchair after full reconstructive surgery to both knees from two completely separated patellar tendons incurred during a basketball game. After learning to walk again, I've been able to train my way back up to a 275-pound front squat, at a bodyweight in the mid 240's.

There's still a year left in my projected recovery. If I can do it, so can you.

If you lose proper and honest form while attempting 12 bodyweight dips, you should get stronger and shed a few pounds if needed to make it happen.

Assuming your shoulders are in good standing, dips shouldn't stop at a 90-degree elbow angle. Many believe that going deeper is bad for the elbows and a cause for chronic pain, but in truth, chronic pain often starts from avoiding full ranges of joint motion, not from embracing them.

It's understandable that you might fail at doing 10 chin-ups and maybe even 12 dips, but there's absolutely no excuse for not having the conditioning and muscular strength to do an unbroken string of 35 high-quality push-ups. Keep the core braced, tuck the chin in, and do it.

Chances are, you've acknowledged that you have work to do. You may have also realized there's a big difference between strength and fitness. That's why I've excluded the deadlift and bench press from the mix.

With a little training, the numbers on these lifts can get fairly impressive, but at a certain point the strength can start becoming very task-specific with little overall utility. Still, as a general guideline, I recommend focusing on 6-10 rep maxes for both of these movements, not 1 or 2 rep grinder sets.

People in their 20's with very few years of proper lifting under their belts may turn a deaf ear to shooting for strength standards that involve higher reps and stay on the beast-mode train. Still, it would behoove them to think more carefully about what their long term goals are in and out of the weight room, and just how much a role doing a 650-pound deadlift plays in those goals.

Following the strength protocols of people who are being paid to train is all fun and games until someone ruptures a patellar tendon.

The silver lining behind putting the elite strength standards aside is the fact that level-headed thinking with adjusted expectations can reveal that you're not an unfulfilled lifter just because you can't hit these numbers. In fact, it opens the doorway for other avenues of training, too.

Remember, beyond a certain point, adding strength is a hobby, not a necessity. Aim to get better at the stuff that counts and transfers to real life and you'll be much better off. 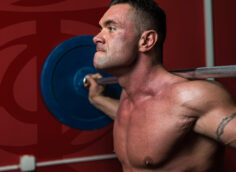 Want to bench more weight with fewer risks of injury? "Prime" your pushing muscles with a few sets of this.
Tips, Training
Dr John Rusin June 21