I'm a simpleton. When I do my laundry, there are no whites, colors, permanent press, or whatever – just "clean" and "dirty."

In short, I like easy, quick solutions to problems whether they're simple or complex. This is largely a function of my experiences with lifting enthusiasts on the Internet. You see, while the Internet has given rise to a tremendous sharing of knowledge, it's also led many people to (for whatever reason) insist they're inherently special.

Remember those finger paintings you made in preschool? They weren't special. Your mother was just lying to build your confidence.

And the little league trophy everyone praised you for? That worked out really well for you, Junior. Why aren't you playing pro ball now, Mr. Special? Maybe because you were slow, uncoordinated, and couldn't have hit the backside of a barn door if it fell on

To that end, you likely don't need anything remarkable on the programming front. The name of the game is subtle adjustments. With that in mind, here are a few to try out.

Drop all your traditional abdominal work and replace it with the following three isometric holds:

This movement is named after John Pallof, the fantastic Massachusetts-based physical therapist who created it. In a nutshell, you're going to brace your core tight and resist the rotation that the cable is trying to apply to you. Increase the challenge by either increasing the load or bringing your feet slightly closer together. Do three sets of thirty seconds.

Simply brace your core and hold at lockout for a set amount of time. I start guys at fifteen seconds per set and increase each week. Do four sets.

Yes, I named an exercise after myself because I'm freakin' brilliant.

And yes, you'll need a partner to perform this exercise.

You'll need to perform these holds in two directions on both sides – meaning that you'll curse my name twice as much.

The concept is simple: Do a Bulgarian split-squat isometric hold, but have someone apply a destabilizing torque in one direction by lightly pulling on a band that you're holding. When he pulls laterally, you do more work medially (adductors). When he pulls medially, you do more work laterally (abductors). As always, get some air in your belly to stabilize your spine.

Do two "rounds" (each including two sets) on each leg for a total of eight sets, each with a fifteen-second hold.

In your other upper body training session of the week, just focus on rep work – nothing heavier than a 5RM load. You'll want to include some assistance work in the remainder of these main sessions, too.

Don't get in the habit of missing lifts! These should be relatively conservative 1RM attempts. If you accidentally miss one, it's no big deal. Just do one fewer set than prescribed.

Do a single-leg movement three times per week for two months.

I love box squats. However, you'll often see lifters get so reliant on box squatting that they'll actually lose sight of where they hit "depth." For these guys, a good transitional phase is outlined below. The first thing you'll need to do is just get under the bar, and then squat down to a box that puts you at just below parallel.

In weeks one and two, you'll do a squat to the box with a tap and go. As soon as you feel the box graze your butt, come back up. It's not "thud and push." The contact should be minimized as much as possible. In your first lower body session of the week, do twelve sets of three with an emphasis on bar speed; use 50 to 60% of your 1RM. In your second session, do five sets of six reps with a heavier load.

In weeks three and four, repeat the same protocol with heavier loads – but no box.

This method effectively allows you to groove the motor pattern for full range of motion benching, but also gets you more confident holding heavy weights. 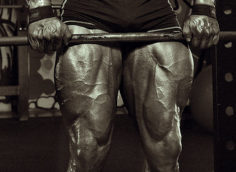 Feeling beat up after leg day? Try this to work out the tightness and free up your mobility.
It Hurts Fix It, Legs, Mobility, Tips, Training
Calvin Huynh August 14

Think you're an alpha male? Here are some brutal challenges that might make you feel like a poodle. Wearing a pink bow.
Challenge Training, Metcon, Training
Dan John March 3

Get your lifts up, get your gains up, and move the bar faster. Do the clean and press to get better at everything.
Overhead Press, Powerlifting & Strength, Training
David C Scott June 18