This article might scare you a bit, but hopefully it'll educate you, too. Why? Well, to be honest, there's a very good chance that you're already pretty screwed up. You might feel good, but that could just be the calm before the storm. Think about these numbers:

It's estimated that one-third of all athletes have disc bulges that aren't symptomatic. I read the other day that 4.4% of six-year olds have undiagnosed spondylolysis (defect in the pars interarticularis of a vertebra).

Eighty-five to ninety percent of Americans will have lower back pain in their lives. (1) Regarding shoulder pain, I've heard the estimate is 70% of gym-goers. Toss in elbows, knees, hips, ankles, and wrists, and you've got the potential to create some very rich physical therapists.

Weight training can be tremendously helpful in correcting these problems and improving the quality of life. However, there is a little asterisk that should accompany that statement. It only offers these benefits when good technique is used on the appropriate exercises in the right dosage.

With that in mind, here are a few common problems that you want to avoid in your training.

Normally, rows are a pretty safe bet. However, as with any exercise, if performed incorrectly (or not matched to individual tolerances), they can cause problems. I outlined multiple technique errors in Shoulder Savers: Part 1, but I didn't touch on how trying to power through a muscular restriction can cause a problem.

This scenario most commonly occurs when the humerus (upper arm) goes into end-range of motion (ROM) extension, putting the elbows back behind your torso; and the scapula stops retracting. Generally, this early end to retraction occurs secondary to a tight pec minor, which gets people stuck in scapular protraction and anterior tilt.

When you keep forcing humeral extension on a scapula fixed in protraction and anterior tilt, the humeral head translates forward in the joint capsule and you can develop anterior shoulder laxity over time. A strong subscapularis can help to resist this anterior pull.

However, if your pec minor and infraspinatus/teres minor are tight, your subscapularis is weak, and you're forcing end-range a bit too hard, it'll irritate you sooner rather than later. This is why it's so important to ensure that the shoulder blades move back and down as you row. You'll be in trouble if the scapula tilts anteriorly as you approach end-range.

And here's how it should look:

Obviously, there are a ton of other factors at work with shoulder function, but this is a good Cliff's Notes version to what's going on if you have anterior shoulder pain when rowing.

People don't think much about the health of their neck – at least not until they hit their 40s and 50s, and realize that they've woken up with numbness and non-functioning muscles in their arms because they've blown a disc.

These issues have a lot to do with people being stuck in a forward head posture at computers, no doubt. However, you can magnify these problems by doing various exercises in cervical hyperextension when you should be in neutral. A few examples:

Good Chin-up – No reaching for the bar with the chin.

If you really think about it, it ought to be called a chest-up. And, to take it a step further, you can't do a good chin-up with a baseball cap on (assuming it's facing forward), as you'd have to go into cervical hyperextension to clear the bar.

The so-called "at risk" position for the shoulder is 90 degrees of abduction with external rotation – basically the position at which you wave to someone. Obviously, this is also the position in which one back squats under load.

If someone doesn't have external rotation (a problem very common in lifters who bench a ton... figuratively or literally), they have to resort to taking a wider grip when squatting. The further out the hands go, the less external rotation that's required to get under the bar.

And in more severe cases, you'll see guys take their pinkies off the bar. They're basically substituting a small amount of supination to make up for super-restricted external rotation ROM.

So what's the problem, you ask?

Well, when you take your hands out wider, you're abducting (elevating) your humerus another 15-20 degrees, and in the process, bringing it closer to the impingement zone. This not only compromises the rotator cuff, but also the long head of the biceps, a common problem area for powerlifters.

So, you've got two options if you don't have solid external rotation ROM. First, you can really hammer on mobility, and use some wider-grip squatting here and there to maintain a training effect. Second, you can incorporate some front squats, safety bar squats, or giant cambered bar squats – all of which are easier on the shoulders.

When you're supporting a weight – whether squatting, benching, or overhead pressing – you should be stable. When you lift a weight off the racks of the bench by yourself, you immediately losethat stability.

With benching, you want the shoulder blades pulled back and down under you to create a stable platform from which to press, and a direct means of transferring force from the lower body to the upper body.

When you protract your shoulder blades to unrack the bar, you lose scapular stability under load. In the process, you not only minimize the force you can apply to the bar, but you also sacrifice shoulder health.

You also run the risk of dropping the bar on yourself or getting pinned under the bar if you don't have a spotter. People do die bench pressing solo every year, you know. That's not an urban legend.

We teach our athletes to always have a spotter hand the bar off, and in the process, follow the exact same counting protocol on each set:

This way, we've ensured a good lift-off while getting the entire torso – from hips to shoulder girdle – nice and stable.

People who are stuck in lumbar flexion (rounding) have screwy backs. Do you know a roofer or a plumber with a good back? How about someone who slouches over a computer all day in lumbar flexion? Or a career cyclist?

These are all low-load flexion conditions. While most back problems in athletic populations relate to extensionintolerance, that's not to say that we shouldn't go out of our way to avoid pushing the limits of lumbar flexion in what we do.

The foremost example of this in gym-goers is the way in which they stretch. If you're careless, you can stretch your hamstrings, groin, and other muscles in a position of lumbar flexion.

Or, you can put a little thought into it and actually maintain a neutral spine.

Now, let's take this a step further. Want to really destroy your back? Combine flexion with either rotation or compression... or both. Compressive loading actually increases as the amount of lumbar flexion increases; so if you can't squat deep with a neutral spine, don't squat so deep.

I know that everyone talks about "ATG" (ass-to-grass) squats, but the truth is that there aren't many people capable of actually doing it safely. You only get one spine. And, before anyone asks, this also applies to rounded-back good mornings or anything else that starts with "rounded-back," for that matter.

Here are some interesting studies to keep in mind:

Cappozzo et al. found that squatting to parallel with 1.6 times bodyweight (what I'd call "average" for an ordinary weekend warrior) led to compressive loads of ten times bodyweight at L3-L4.(2) That's 7000N for a guy who weighs about 150 pounds.

Meanwhile, in a study of 57 Olympic lifters, Cholewicki et al. found that L4-L5 compressive loads were greater than 17,000N.(3) It's no wonder that retired weightlifters have reduced intervertebral disc heights under MRI.

Any takers on putting 17,000N of stress on a back that resembles a structure like this?

Additionally, the next time you decide to do rotational sit-ups, remember that rotation with flexion isn't any better. Iron out those asymmetries and avoid lumbar flexion, especially under load and in rotation.

It's definitely the little things that count. All those tiny mistakes and oversights that don't cause you major problems today or tomorrow. Then one day you step into the gym, and before your first set is finished, something goes pop and you're sidelined with an injury for 12 weeks. Be smart about your training, pay attention to your body, and work these tips into your program as necessary. 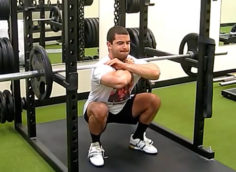 This exercise will boost your front squat strength and improve your form. If you can hold for more than 30 seconds with 135 pounds, you're awesome.
Exercise Coaching, Legs, Squat, Tips
Ben Bruno August 8

Still trying to be the biggest dude in the gym? Once you've reached your muscular potential, your body will fight back. Here's what to do when it does.
Bodybuilding, Motivation, Training
Christian Thibaudeau January 3

Move slowly through 2-3 rounds of 5 reps on each side to prep the shoulder before your next pull-emphasized training day that involves things like pull-ups.
Exercise Coaching, Mobility, Shoulders, Tips
Dr John Rusin May 18
An interview with Coach Scott Sonnon
Training
Chris Shugart March 14