If you lived in New York and wanted to vacation in Italy, would you book a plane ticket or head down to the bus terminal? The method you choose will determine when, or if, you reach your destination. The same idea applies to your training. Once you set sight on a goal, one of the biggest variables in achieving that goal is your plan of action. Choose the wrong plan and you simply won't reach your target or, if you do, it'll be a slow and bumpy road getting there.

Let's examine two very effective training programs and make sure they're being used to maximum benefit. 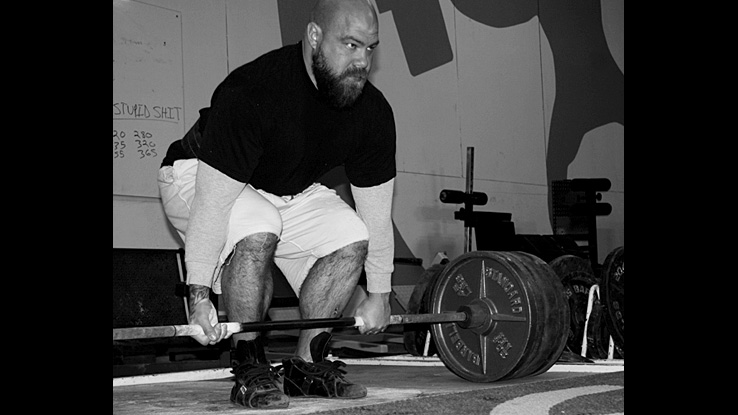 That may be the single most complete summary of the mindset behind 5/3/1 that I've ever heard. The 5/3/1 training plan is best known for telling lifters to "start too light and progress too slow" in order to emphasize long-term progress. The only real cornerstones of the plan are a focus on big barbell exercises (almost always the squat, flat bench press, deadlift, and standing overhead press), a weekly rotation in rep ranges (generally the 5, 3, and 1 giving the plan its name) with a weekly progression in weight, and setting a PR on at least one big set each workout. Outside of those points, 5/3/1 works an adaptable frame and allows customization according to a lifter's individual weaknesses, abilities, and goals.

When an underweight 20-year old, an overweight 40-year old, and 30-year old preparing for his first powerlifting meet can all use the same general training plan, it's worth paying attention to. Because 5/3/1 is a template rather than a strictly defined program, it's flexible enough to work with nearly any level of lifter for nearly any goal. As long as the four pillars are kept in place, training details such as total volume, assistance work, and exercise choice can be tailored for a dedicated fat loss plan, an intense muscle building routine, strict strength work, or athletic performance.

This level of adaptability, combined with the constant rotation of volume and regular (often once a month) deload phases are what allows you to maintain progress for the long-term. It's not uncommon for lifters to follow 5/3/1 for a year or two, or longer. That's not a claim to be made by most training programs. The plan may actually work "better" the longer it's adhered to, since it allows more time to be invested in lifting heavy weights for high reps, which is a long-trusted maxim for building a large, strong, generally kickass body.

However, because 5/3/1 does work so well over the long-term, it requires the lifter to exercise a certain level of patience and restraint. Those habits are difficult to find in an enthusiastic newb or even in an experienced vet eager to see new progress. If a lifter has difficulty trading a little progress in three weeks for a lot of progress in six months, they'll ultimately short-change themselves. Similar to taking a cheat day too often or too soon during a cutting phase, if you can't delay gratification you can only expect a lot of mistakes and "do-overs".

Similarly, while it can be a benefit that 5/3/1 allows customization towards different goals, it can just as easily be a hindrance in that 5/3/1 requires customization. Lifters need to decide for themselves how much assistance work is necessary, how much weight is needed, and how hard to push or not push each set. Simply put, even as basic as 5/3/1 is, it's also fairly easy to screw up. The two most common stumbling blocks are doing too much assistance work which shifts focus away from the primary lift of the day and simply lifting too heavy, too often.

For the programming outside of the big sets, Beyond 5/3/1 explains numerous options for assistance work to suit different scenarios, but many lifters see it as just more information to sort through. Which plan is really "the best"? What if I can't do "fill in the blank" exercise? I don't like doing A, so I want to do B instead. It's enough to make Wendler weep.

The general rule of "simple and minimal assistance is better" works for some – when in doubt, do Triumvirate or Boring But Big – but when increased muscle size becomes a goal, the right or wrong approach can be a major tipping point. Issues quickly arise when the "assistance work" starts looking like stereotypical bodybuilding routine with multiple exercises per body part per session, intensity techniques above and beyond muscular failure, and a minimized focus on the big PR set.

Further, when a lifter either miscalculates their training max, chooses to start heavier than suggested because "starting too light" seems counterintuitive, or simply pushes a set too heavy too soon, they fall into the trap of trying to exhibit their strength in the gym, rather than train their strength in the gym. When your max deadlift is 495, it takes a level of self-control to remind yourself to "only" lift 375 for your big PR set of 5 or more, but that level of discipline is what brings serious progress. 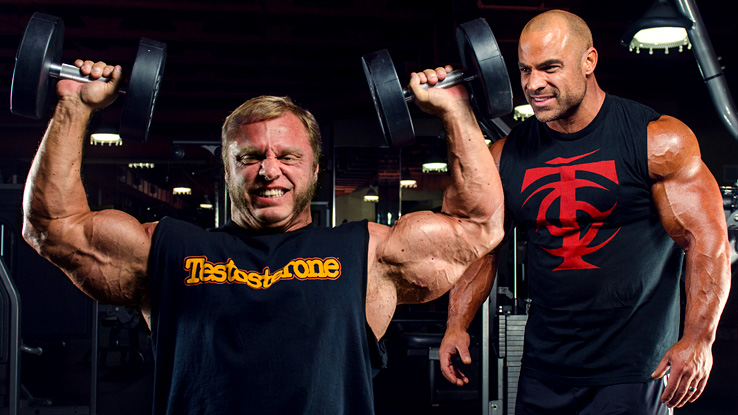 Reactive Pump Hypertrophy is, in a sense, the best of classic hardcore bodybuilding blended with a 21st century approach to daily eating and peri-workout nutrition. John Meadows coordinates unique exercises and specific exercise techniques, targeted daily diet plans, and strategic cutting-edge supplement use immediately before, during, and immediately after lifting, to elicit pure and simple muscular growth.

Work is most often performed in the traditional bodybuilding "sweet spot" of 8-12 reps, with plenty of gut-check high-rep sets and some recurring work in the 3-5 range –generally on squats, deadlifts, and a variety of presses. It's the same style of training that big guys were doing for the last 20-plus years in order to get even bigger and leaner. The lifting focuses on building, maintaining, and manipulating the pump in the target muscle. (Cue everyone's favorite Pumping Iron quote from Arnold.)

By directly attacking each body part at least once a week with several brutal exercises, the muscle is given tremendous growth stimulus which, when combined with the suggested nutrition and workout supplements, essentially gives the muscle no option but to hypertrophy. If fact, adhering to the intense training without also supporting it with the advised diet and supplement plan would be a recipe for stalled progress, if not straight-up regression. Unlike many other training programs, Reactive Pump does specifically recommend training-supportive nutrition and supplement guidelines.

The advised nutrition uses basic calorie cycling (eating more on training days and less on non-training days) as well as deliberate meal timing – eating more post-workout and using protein "pulses" throughout the day to saturate the muscles and enhance recovery and growth. A focus on standard bodybuilding proteins (whole eggs, red meat, poultry, and fish), healthy fats (especially nuts and coconut oil), and a very noticeable inclusion of carbs (such as rice and potatoes) makes the diet substantial enough to support the hard training while encouraging increased lean muscle mass.

However, as Reactive Pump does address and dictate recommendations for all three aspects of progress – training, nutrition, and supplements – it's obvious that some lifters may hesitate at the recommended workout supplements because of their limited budgets. But the fact is that the overwhelming majority of those who've actually implemented the plan have seen improved recovery, improved performance, and visible gains.

Reactive Pump makes use of higher carbs, the Smith machine, "the pump", and isolation work. If Paleo and "functional training" describe your personal belief system, you're gonna have a rough time with this program. Reactive Pump is bodybuilding. Period.

Also, because the program calls for multiple intensity-boosting techniques in each session and often uses uncommon or modified exercises in addition to bodybuilding staples, it's not suited for beginner lifters. There's no "beginner's version" of Reactive Pump, like can be found with most other training routines. It's like giving a 17-year old with a new license the keys to a vintage Ferrari. They might really, really want to take it for a test drive, but it's a bad idea for so many different reasons.

Reactive Pump training is most appropriate for relatively-experienced lifters making straightforward hypertrophy their number one goal. Beginners without an established foundation of strength and muscle and lifters primarily concerned with benching three plates or running a sub-5 40 would best be served looking into a different plan.

Are You On The Right Path?

The more specific your goal, the better organized your training needs to be, so it makes sense to regularly examine your overall plan to make sure you're actually on the way to seeing progress and not just wasting your time in the gym. If you're going to spend month after month sweating, straining, and leaving it all out in the gym floor, you better make sure all that struggle is worth it and you end up getting better, bigger, stronger, and leaner.

It's time to step back and take an honest look at what you've achieved in the last few months. Decide whether you're standing in your own way, headed down the wrong road for your goals, or if you're actually getting out just as much as you put into your training.