We all love catch phrases:

No pain, no gain!

Go for the pump!

These slogans look good on cheap, ripped-up muscle shirts, but many just don't make a lick of sense in the real world. I'm here to tackle four of the most common myths you probably hear spouted as fact by some meathead at least once a week in the gym.

This is one of the most absurd myths making the rounds. Low repetition training (under five reps) with a large load (85 to 100% of one rep max) recruits the greatest percentage of Type IIB fibers, which have the highest potential for muscle growth. I could easily end the argument with that statement since it pretty much says it all, but I'll give more examples for those of you with inquiring minds.

How many times have you read an article by a strength coach who said something along the lines of, "Olympic athletes perform low repetition training for the majority of their cycle and they gain little or no muscle weight, so low-rep training doesn't cause much, if any, muscle growth." Baloney!

Did these same strength coaches ever think that maybe these lifters didn't want to gain weight so they could stay in their respected weight class? If so, it would be easy to control the amount of muscle weight gained by merely decreasing the number of total calories consumed each day. If they consumed maintenance or sub-maintenance level calories each day, they wouldn't grow any appreciable amounts of muscle regardless of the training method. Therefore, the amount of muscle an athlete gains could easily be controlled (or maintained) by their caloric intake.

Second, the number of sets performed would have a greater influence on muscle growth than the number of repetitions. For example, a trainee might read about the benefits of low-rep maximal training for gaining size and strength. Since he currently performs three sets of ten reps for each body part, he decides to increase the load and decrease the reps to three per set. Now the trainee is performing three sets of three reps for each body part. No wonder he doesn't grow any muscle; he's only performing nine total reps!

Given the two previous explanations, it becomes apparent that the total number of sets (volume) and caloric intake are what determines the amount of muscle growth. Therefore, lift heavy with some volume and add calories if you want to grow!

It's tough to convince people this myth is untrue. Trainees like immediate responses to weight training programs. Males especially are infatuated with fast muscle growth (I include myself in this category). Unfortunately, training that causes soreness creates a false sense of accomplishment. In other words, soreness will cause an immediate increase in girth measurements, but it's not due to added muscle; instead, a certain degree of swelling accompanies medium to severe soreness. This swelling is what's making the tape measure your new best friend. Within a few days, the soreness (and swelling) is gone and so is the new "size"!

But what about the talk of soreness causing increased secretion of growth hormone, Testosterone and IGF-1, therefore leading to increased muscle growth? Sorry buddy, but I ain't buying it. Early in my training career I thought this statement was true, but years of experience have shown otherwise. From my observations, I can tell you the studies I've read supporting such a claim aren't translating into new muscle growth. Kind of reminds me of HMB – all research and no results. The same is true with severe muscle soreness.

I could do many things to your body to make it sore (hit you in the biceps repeatedly with a tire iron, for example) and it wouldn't elicit a muscle growth response! I'm not the first strength coach to make such a statement but it bears repeating. Make no mistake about it: extreme muscle soreness slows the recovery process. If you want fast muscle gains, avoid severe soreness. You can take that statement to the bank (and tell them I sent you).

Myth #3: Adding weight to the bar every session is the only way you'll make progress!

There are many factors involved in making progress; adding weight to the bar is just one of them. In short, progressive overloading is overrated.

I have great admiration for the book Supertraining by Siff and Verkhoshanksy. Not only is it one of the best books ever written on strength and conditioning, but it also does an excellent job disputing some common weightlifting myths. One of my favorite parts of the book deals with progressive overloading. Basically, progressive overload refers to a need to constantly increase load in order to develop greater strength levels.

Remember the legend of Milo? He was the fella who carried around a calf everyday. As the calf grew and got heavier, Milo got stronger with each passing day carrying that sucker around. That's progressive overloading. Sounds simple, huh? But check out this excerpt from the Supertraining book:

Closer examination of the Milo tale reveals an incomplete ending. Milo, being an enterprising strongman, obviously would have sought further increase by lifting progressively heavier bulls. If he had progressed very gradually, the implications are that he should have been lifting well over 500kg after a few years. Similarly, if you began your first bench press with 60kg at the age of 16, then increased the load by only one kilogram per week, you should be lifting 580kg at the age of 26 and 1100kg at the age of 36 years. [Note: That's 2420 pounds!] That this will not happen is obvious. In other words, progressive overloading produces diminishing, and ultimately zero, returns (1).

In other words, that Milo tale might very well be a bunch of bull! I'm not saying that progressive overloading is useless and I don't think Siff and Verkhoshansky were either. Instead, the concept isn't as clear-cut and simple as it seems. Merely adding more weight to your barbell every session isn't going to turn you into a strongman. It's just not that simple.

If you're a powerlifter, this phrase might've been engraved on your blood-stained weightlifting belt by your great grandma, Mabel. Basically, the statement refers to a greater ability to lift a load due to an increase in body weight. Initially, this statement might appear to make some sense (which is why it's hung around so long), but once you understand the details, it's just plain dumb. A physicist would slap you in the face with a pocket protector if you said this in his classroom.

Here's a sample scenario for you to ponder. Let's take a 200-pound weightlifter with a maximum squat of 400 pounds. We'll call him Sammy No-Squat, since he's as pathetic at squatting big iron as Ray Mentzer was at explaining biochemistry. Sammy decides to hire a powerlifting coach to improve his miniscule squat numbers. The coach takes one look at Sammy and says, "Boy, you need to put on some weight if you wanna squat big!"

So Sammy spends the next six months eating everything under the sun. At the end of six months his body weight has escalated to 240 pounds. Sammy retests his squat, only to find out it didn't improve one bit! In fact, it was a little harder to lift the same amount of weight. How can that be given the staying power of the powerlifting phrase, "It takes weight to lift weight"? Let me explain.

When you perform a squat with just your body weight (no external load), you're moving approximately 75% of total body weight. Therefore, if 200-pound Sammy performs a body-weight squat, his muscles are actually lifting about 150 pounds of weight. To take this a step further, if the heavier 240 pound Sammy decides to perform a body weight squat, his muscles have to lift 180 pounds of weight. It's easy to see in this example that he has to lift 30 pounds more body weight due to his feeding frenzy. Now let's carry over these numbers to the weight room.

When the lighter Sammy squats with 400 pounds of iron on his back, his muscles have to lift a total of 550 pounds (400 pound load plus 150 pound body weight). Given the same load, the heavier Sammy has to lift 580 pounds (400 pound load plus 180 pound body weight). So now, Sammy's 400 pound squat takes more effort to lift at his new, heavier body weight. He has to lift 30 pounds more weight! Combine this with the fact that he didn't change his squat routine (i.e. he didn't get any stronger) and you'll understand why his squat didn't improve with a heavier body weight. His muscles have to produce more force to lift the same load!

Now, I must state that an increase in body weight will help you push more weight, but we're talking about lifting more weight. Also, more body weight may aid your efforts when attempting to lower a load due to the laws of physics, but the last time I checked, no one was handing out trophies to the person who could lower the most weight.

Also, there's the theory that increasing the girth of your waist (i.e. base) will aid your efforts at the bottom of the squat when reversing the movement. In most cases, I've found this to be unnecessary. By utilizing the correct coaching tips, I can get my clients to expand their waist enough at the bottom to achieve the same effect without making them add eight inches of blubber to their waistlines by overeating.

Now, you might be thinking, "I know tons of lifters who improved their powerlifting numbers by gaining weight, so that statement must be true." Sure, many have, but their strength was from an increased level of muscle, not body weight. If a lifter was on any decent weight-training program and consuming a hyper-caloric eating plan, approximately 60% of added body weight would be from muscle. Therefore, if Sammy gained 40 pounds of body weight, then 24 pounds of it should've been muscle! Obviously, 24 more pounds of muscle due to sarcomere (muscle fiber) hypertrophy will make you stronger! Therefore, the phrase should be restated as, "It takes more muscle weight due to sarcomere hypertrophy to lift more weight."

If I could leave you with one phrase to summarize everything in this article, it would be: If you want to lift big, you must learn to think big. Now there's a phrase for your ripped-up muscle shirts! 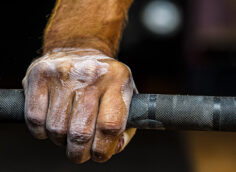 Looks odd, but this new deadlift variation will build your hamstrings and posterior chain strength like nothing else. Take a look.
Bodybuilding, Deadlift, Powerlifting & Strength
Tanner Shuck February 13

Fitness is filled with workout challenges and WODs. And most of them are stupid. Here are three smart ones that take only 10-15 minutes. Bonus: How to design your own.
Challenge Training, Metabolic Conditioning, Metcon, Training
Martin Rooney July 4