The squat is a staple of any lower body workout. If you're a newbie, then front squats and back squats are about all you'll need. If, on the other hand, you've put in some serious time at the gym and aren't seeing results, you may need to take on some challenging new squat variations.

For the record, I have my athletes squat a minimum of two times per week, with the majority squatting in some form four or more times per week. As coaches and athletes, we usually have our "go to" exercises and we program them in more often than we should. I, however, have always been a big believer in "variance." Sports are played in three planes of motion encompassing 360 degrees, and the body needs to prepare for it the best it can. Please understand, though, that variance in no way means "random"! Variance always has purpose. That purpose is progression.

Every athlete has different needs so we program for the individual. With that being said, I want to introduce you to a few back squat variations we use to overcome lack of depth on a squat due to mobility issues, weak power coming out of the hole, deficiencies in knee stabilization, and inadequate core strength. These unique variations of the back squat can help overcome these problems.

This one's by no means a new invention, but sadly, few lifters employ it. In theory, it's simple. Once you're set up to squat, you'll descend under control until you reach the full squat position. You then rise up only one-fourth of the way up before descending back in the hole. Repeat this one-fourth squat 4 more times (for a total of 5 reps) and then return to the standing position. That's 1 rep of a set of 3. These squats are great for those that lack depth or power out of the hole or for those that need additional knee stabilization.

You'll need bands and additional weights to do this. I prefer to use mini or light bands and kettlebells. The bells will start to oscillate once you step out, so take time to get stable before starting the descent of the squat. The wobble squat requires the lifter to control the weight against chaotic forces. With the proper load, these squats can be used for both hypertrophy and conditioning because you're fighting the aforementioned chaotic forces and you're experiencing some significant time under tension. These squats are great to increase core strength and depth because the descent must be purposeful and controlled. Do them for sets of 5.

Here we just combine the 1 and 1/4th squat with the wobble squat. You get all the benefits of both movements in one exercise with just a little bit more anxiety! These are done for sets of three, including the 5 pulse reps at the bottom.

Have you ever screwed up while loading a bar and put more weight on one side of the bar? If you have, then you've done a Russell squat. Russell Mueller, one of my trainers, is notorious for not loading the bar properly when we all train (we refer to this as getting "Russelled"). He's done this to me on numerous occasions over the years and my core would always end up being incredibly sore on the over loaded side. As a strongman competitor I need a strong core and Russell's mistakes led me to start using this variation in my own training.

These can be done with a slight overload on one side where you still stay centered on the bar, or a heavy overload on one side of the bar where you actually need to stand a little off center so you don't end up ditching the bar. These asymmetrical loads recruit the core and legs in a completely different manner than a regular squat. My ability to carry heavy loads in my hands and on my back has improved significantly since I incorporated Russell squats into my squat variations.

I prefer to do these for sets of 5, but remember you need to work both sides. You'll do one set facing the wall and one set facing away from the wall. Three to 5 sets per workout should be sufficient. The first video explains the lift, while the second shows Russell demonstrating both versions – lightly loaded so he can stay centered under the bar, and heavily loaded where he needs to stand off-center.

Before the naysayers start a shit storm, let me say that strongman and athletics in general can be dangerous. As an athlete and a coach I need to prepare my body and the bodies of my athletes for unforeseen contingencies. Used properly, the Russell squat can help teach the body to withstand similar deviations of load on the field of athletics. 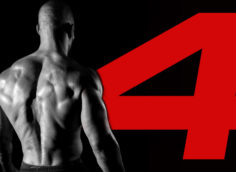 Certain muscles respond much better to specific rep schemes. Here's how many reps to do for back, quads, chest, shoulders, and more.
Bodybuilding, Powerlifting & Strength, Training
Lee Boyce April 19