Here are four (often unappreciated) tactics that pay off every time in every situation. You can implement any or all of them right away without even needing to change whatever basic program format you're using.

More muscle has been grown in the 8-12 rep range (give or take) than all other rep ranges put together. There's actually a very simple and convincing reason for why this is so.

Although the bulk of the current scientific research on muscle hypertrophy strongly suggests that muscle growth is directly correlated with how many "hard" sets you perform per muscle/per week, that same research also argues that the number of reps per set doesn't really matter much, as long as those sets are taken to, or at least near, momentary muscular failure.

So you could indeed build tons of muscle using sets of 2-3 rep, or conversely, sets of 20-25 reps – and many lifters have done just that. In practical terms, however, there are some very good reasons why you shouldn't veer toward either extreme.

Low-rep (1-7) training requires much heavier weights, which comes with disadvantages:

High rep (13-plus) training comes with only one primary drawback, but it's a significant one: Assuming that the value of a set is hinged upon taking it to failure, it becomes clear that only the last few reps are responsible for the benefit you get from the set as a whole.

So if you do a set of 20 reps, those first 16-18 reps only serve to get you to those last few result-producing reps. In other words, they're necessary, but also a waste of time and energy. If on the other hand you do a set of 8, you'll only need 5-6 reps to get you into the growth zone of that set.

There are, however, a few different legitimate reasons to (at least sometimes) do either low or high-rep training:

Finally, there's one additional reason to stray from the 8-12 range: If you always, or nearly always, train in that range, your body has likely habituated to that specific stressor. Consequently, your body is likely reacting less strongly to it than it used to.

If this is the case – if you've been training in the 8-12 range for a long time – try venturing into the 5-7 range for a month or two, followed by another 4-8 weeks in the 15-20 range. You'll be pleasantly surprised by the results.

If you care primarily about gaining muscle and much of your training deviates from this first recommendation, apply the 8-12 rule immediately and before long your gym buddies will start asking you what you're "on."

As I wrote in The End of 3x10, using "straight" sets and reps (like 4x8 using the same weight for every set) isn't wrong, but it's not the most efficient way to organize your workloads.

That's because, if you're working as hard, fatigue accumulates over the course of your work sets. Keeping in mind that it's only the final, fatiguing reps at the end of each set that really deliver the results, your early work reps will be too far away from failure to produce significant results.

There are at least two better approaches:

What you're focusing on in both cases is taking each set close to failure, not stubbornly maintaining the same weight or number of reps each set. Now there's an important caveat with this recommendation: Regardless of what your weight and reps look like on any given session, it's paramount that you improve upon it the next time, so if workout 1 looks like this...

This simple tweak is simply a matter of changing your focus from absolute numbers to the RIR ("reps in reserve") value of each set. No matter what program you're currently using, apply this strategy immediately and that program will work even better.

While that's still a useful metric to monitor, what really matters for muscle development is the number of fatiguing sets per muscle/per week. Within certain limits, the amount of weight you use and/or the number of reps you do is relatively less important.

So when growing new muscle is important to you, you should be most focused on the number of difficult sets/per muscle/per week you perform. In terms of applying progressive overload to this strategy, simply strive to do gradually more hard work sets per muscle/per week over the course of a mesocyle.

Do this even if it becomes necessary to slightly reduce weight and/or reps. This means that you should do your very best to maintain or even increase weight and/or reps from week to week, but when it comes to hypertrophy, volume is king. So if push comes to shove, it's acceptable to sacrifice intensity to volume.

Apply this simple perceptual shift to your training right away and surprising amounts of new muscle will be your reward.

This recommendation is likely to be the most powerful for many lifters, but it may be the hardest to "digest." From my over 30 years of experience with helping guys get bigger and stronger, I'd estimate that the number one reason they fail to gain muscle is their stubborn refusal to gain weight and allow themselves to get a bit soft while in a building phase.

You're either in an anabolic state or a catabolic state, so you'll need to pick one and commit to it, at least for a period of time. Unless you're the rare exception (i.e. an obese 18-year old noobie taking lots of PEDs), any weight gain you experience will be comprised partly of muscle and partly of fat.

Fortunately, you can put the odds in your favor by doing the following:

Establish a philosophical framework for your overall approach. When it comes to getting the best results, there are two similar, yet distinctly different avenues you can pursue:

1 You can strive for maximum effectiveness.

In other words, you want the maximum possible outcome, without regard to the price you'll need to pay in time, energy, money, or impact on the rest of your life. If ingesting 100 grams of carbs immediately upon finishing your workout is .03% more effective than waiting until you get home, you'll consume those carbs at the gym.

If training biceps and triceps four times a week is marginally better than three times, you'll take the former option, even if your girlfriend complains that you never spend any time together because you pretty much live at the gym.

2 You're more about maximum efficiency.

If research shows that lifting four days a week is only slightly more effective than three, you'll still train Monday, Wednesday, Friday. If stopping two reps before failure is nearly as good as redlining it, you'll leave a few reps in the tank.

In other words, you've chosen to look not only at the results, but also the costs of those results. If significantly less work, and if stressing over details gets you 85% of the results you'd get if you went balls-out, that strikes you as a good trade-off.

Neither approach is objectively wrong or right. It's just a matter of personal philosophy and goals. When you're clear about your training target, you're much more likely to reach it.

Does manipulating your hormone levels through exercise actually lead to more muscle? Or is that Broscience 101?
Bodybuilding, Training
Mike T Nelson, PhD January 16 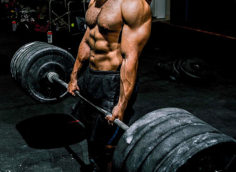 Many exercises are known for getting people jacked and strong, but they might not be the best for YOU. Here's how to tell.
Deadlift, Powerlifting & Strength, Squat, Training
TJ Kuster September 6