The great thing about the Internet is the copious amount of information available to us.

The problem with the Internet is that there’s a copious amount of information available to us.

Watching any one of a number of squat videos was a great teaching tool for me, as well as countless other lifters and coaches.

Yet, they generally only address half of the equation. We learn what good technique looks like, and we may even assess and learn what parts of our squat mechanics need correction, but where do we go from there?

Cue: An Utterance Intended at Creating or Altering a Behavior

First, for illustrational purposes, let’s list many of the common squatting cues all at once (don’t be offended if you don’t see yours in here).

“Good lord. I have to do all of that? Can’t I just squat” – Confusedcius

It’s impossible to learn this task all at once, or even in chunks. It’s a long journey to get good at all the above, and so a slow, progressive approach is what we need. Any good powerlifter will tell you that it took him years to get his squat technique down and he’s never as good as he wants to be.

We must first, above all, make sure one can squat safely, which is possible with imperfect mechanics. While you can squat safely with less than perfect form, you cannot squat maximally.

This is a spin-off of the Pareto Principle.

An 80% cue is a cue that will yield mechanical improvement to about 80% proficiency. A 20% cue will take a person from 80% to 100% proficiency. Once the 80% cue has been mastered, 20% cues will provide the last steppingstone toward perfection (though true perfection may never be reached).

A single utterance telling a person to do something.

“Knees Out” is an example – it prescribes one single action. Solo cues should, as discussed above, be kept to one at a time to prevent confusion.

A series of cues that complement each other.

Think of each piece of a compound cue as an equal part of getting a single job done.

“Chest up, butt out” is an example – pushing the chest up helps arch the back, as does pushing the butt out. Each contributes 50% to one bigger cue, namely arching the back.

These are compound because the brain’s focus is placed in the same spot – the arch. Other cues that may contribute to solving the same problem (and maybe seem compound) may, however, require separate attention, in which case I’ll refer to them as solo cues.

Two different cues, used concurrently, will reduce compliance in both.

An example is trying to “spread the floor” while also trying to “keep elbows under the bar.” The mind is placed in the feet in one, and in the upper back in the other – it can’t be two places at once, and neither improves as a result.

8 out of every 10 reps are mechanically perfect.

Now that we’ve addressed those concepts, let’s look at some squat maxims. 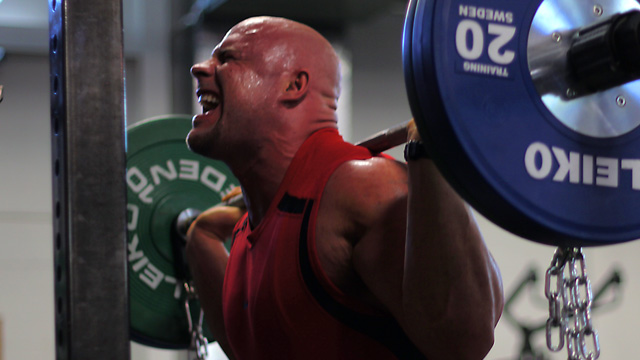 The low back must be held tightly arched to prevent spinal injury – anything less strains the spinal ligaments and discs and is a sure path to the chiropractor.

(All the below comprise one compound cue)

The weight must be transmitted through the heels with the feet flat on the floor. Going onto the toes puts tremendous strain on the ankles, arches, Achilles tendon, quads, and knees. A heel chock can be used, but even with a heel lift the weight must sit back.

This is one simple cue that, when done properly, will get the squatter to initiate movement with the butt, which shifts weight to the heels. “Stays back” is important in preventing the knees from sliding forward as the lifter descends toward depth.

(All the below comprise one compound cue)

Holding the knees out puts more of the load on the hips, which strengthens the posterior chain and reduces the load on the knees and quads. I’ve found that most squatters can more easily control their knees compared to their feet, which is why we use this as a maxim rather than “spread the floor.”

This coaching cue gives the squatter two-in-one – a command to hold the knees out, and a qualification of exactly where “out”is.

(Both below comprise one compound cue)

4 – Keep the Upper Back Tight

Upper back tightness is crucial in preventing forward lean, which will staple many a squatter to the floor. It also contributes to maintaining an arched lower back – if the upper back heads south, the lower back won’t be far behind.

(Both of the below are one compound cue)

If a person is squatting with a tightly arched low back, a compressed upper back, is sitting back into the squat, and holds the knees out over the toes (and reaching depth), he or she is squatting properly. All other techniques on top of this increase performance by helping to maintain or improve all the above. A few of these are:

This system takes the guesswork out of getting better. Couple hard work with systematic practice and you’ve got a recipe for success.

Take video of a squat at 10, 6, 3 and 1RM weights. This should show a good pattern of form breakdown as weights get heavier. Note the weight at which each flaw either appears or becomes significantly worse. Flaws will be present (we all have them); address them in the order as outlined in step 3 below.

2 – Start at the Most Injurious Maxims

Injury-prevention is the first focus – start at maxim #1 and descend in order. If any of the maxims have less than a high level of proficiency, start with 80% cues first and go down the list until 80% proficient at all four.

Within each maxim are many derivative cues that, when focused on, will improve the maxim.

3 – Adhere to 80% Proficiency For Any Single Cue

The goal is to achieve 80% proficiency using 80% cues before moving to heavier weights. Once 80% proficiency is achieved at a given weight, it’s time to add in 20% cues – you’ve proven that you can maintain great mechanical form most of the time.

Adding in the 20% cues doesn’t mean forgetting about the 80% cues, it just means proficiency has increased enough for the mind to allocate focus on an additional task.

This is where we have to start believing in practice and repetition – don’t pick two different cues concurrently. Pick one solo or one compound cue and stick with it for 3 weeks or 300 repetitions at a weight that just meets your 80% proficiency threshold.

Continue to add new cues and/or retest at new weights each time proficiency reaches the 80% mark. The goal is 100% proficiency – the 80% mark is simply to say, “We’re good enough to add in another element without sacrificing the previous.” 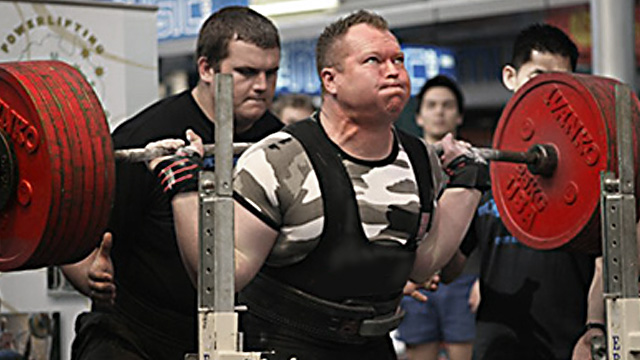 Understand that everyone’s way of teaching/cueing good form in exercises is different. It’s subjective and there’s no reason to take the list of cues, or the order in which they must be taught, as gospel.

The system of learning to practice is what’s most important. However, the maxims of good squatting are largely immutable. Argue if you must, these maxims are solid.

Can I Still Lift Heavy in This System?

Absolutely. We need the vast majority of repetitions to be perfect – hence the 80% proficiency rule – but it’s okay to go ahead and push it on heavier sets, realizing that these don’t represent the majority of sets and repetitions anyway.

Your form will be made or broken on the warm-up sets and those building up toward the 90-100% of 1RM sets. These are the ones that require the practice system outlined here.

Go ahead, test your form, and don’t fret when it’s not perfect – no one expects it to be. Still, realize that your skill work must be very dedicated and focused when below maximal levels, and every effort should be made to reach the 3 week/300 rep mark with sets performed within in the 80% proficiency threshold.

This is just like any other skill. Major League hitters are created on the batting tee, not the batter’s box. Boxers are built wearing headgear and heavy gloves. Focus more intently on the low-intensity and your high-intensity will reap the benefits.

But It’s My Weaknesses That Are Holding Me Back, Not My Focus

This may be true at 3RM weights or above, but it’s likely not true below that mark. And this is why we discussed regression – you shed bar weight until compliance with the cue can be maintained.

You can add weight and work with imperfect form at maximal intensities, but don’t use weakness as an excuse for using imperfect mechanics at lesser intensities. If you truly can’t focus on maintaining good form at, say, a 6RM or below, then quit – you don’t want it bad enough.

The steps of the 80% Proficiency System are simple and can be applied to squatting, deadlifting, or any other skill provided there’s a clear set of commonly held maxims in place for proper performance of the skill.

For review, the steps are as follows:

The Ship of Theseus

This system is in place to help the lifter keep on track and apply a process of learning to the weight room, where no one “practices” squatting – they just squat. But a mindset change is important – if you’re not getting better, you’re getting worse.

To close, a philosophical query (I’m a Philosophy grad, so I have to throw this one in there to illustrate the point of this system):

Theseus had a wooden ship out to sea. All wooden objects rot over time, as was the case with his ship. But his ship didn’t rot all at once, and so Theseus replaced a plank here and a plank there. Over time, he realized, not one plank from the original ship was left. Was it still the same ship?

In our case, the answer is no – you’ll be a new man, a squatter with great mechanics, who was made solid by persistent practice and tremendous focus.