Start your biceps work with hammer curls, then a preacher curl variation like the one here. For safety, finish with heavy barbell curls when you're biceps are fully pumped.
Arms, Bodybuilding, Exercise Coaching, Tips
John Meadows January 23 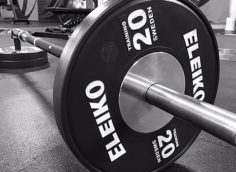 Endomorph, ectomorph, mesomorph: Dumb labels from the 1940s that were never meant for lifters. Here's the real story.
Tips, Training
Chris Colucci May 9