The problem with most fitness challenges? They rarely, if ever, take the size of the lifter into consideration.

Nine times out of 10, they'll deal with lifting a certain percentage of your max for some defined rep range, performed within a time constraint or with a certain amount of prescribed rest.

Since we know that work performed matters much more than load lifted – especially where conditioning and fitness are concerned – it's time big dudes rewrote the narrative. If you weigh over 220 pounds, take notes.

A workout involving 60% of your max squat for reps and short rest periods may equate to 210 pounds for a dude who's only 180, but you're looking at maybe using 265 pounds for a guy who weighs 240. (I'm basing that on my own PRs.)

Not only does the bigger dude have to deal with a heavier implement, but he has to move that implement a greater distance, assuming he's taller. That means more work, by literal definition. Asking him to do this with the same short rest intervals as a small dude is unrealistic and will leave big guys on their backs in a hurry.

If you're strong, tall, and large, chances are that mixing big-lift percentage work (of 1RM) with high reps and fixed low rest intervals is a recipe for injury. There's nothing wrong with doing some serious rep work, but make the right choice. Give your body the rest and recovery it needs between sets instead of holding to 45 or 60-second guidelines.

If you don't choose to ditch timing your rest intervals altogether, at least be much more generous with the rest you assign yourself during those big movements. Leave the low rest stuff to your accessory movements performed on machines or with dumbbells.

Base things off percentages of your bodyweight rather than percentages of your rep max. This can be a smart substitution when combined with low rest intervals. This will likely leave you with a number on the bar that's a bit more conservative, especially if you have freakishly strong PRs.

A dude's bodyweight-equivalent squat for 10 reps might be barely 50% of his rep max, which, by the books, may be "too light." But when factoring in the "work" discussion mentioned earlier, it changes the game and proves itself to be a worthwhile substitution.

A typical EMOM set usually ends up giving a lifter 35-45 seconds of rest before the next set begins. You can do the EMOM style for as long or as little time as you'd like, as your conditioning allows.

Before jumping into the following barbell movements, follow the criteria mentioned earlier regarding bodyweight percentages. Approach EMOMs conservatively with these wicked burners for the deadlift, squat, bench press, and strict press:

I know, it looks easy, but if you've picked an honest starting weight and you're obeying the clock, you should feel like you're almost ready to call it a workout by around set number 8 or 9. This is especially true for the squats and deadlifts – by the second half of the EMOM, you'll be drenched.

The good thing about this technique is that it backs off on the amount of weight being lifted AND the number of reps performed (relative to the most you can do) and counters that with very short rest intervals. You'll probably end up with 45 seconds of rest per set, which, believe me, you'll need.

You can choose to do two exercises using the EMOM method in the same workout, but make sure they're not competing movements. In other words, don't pair the strict press with bench press and don't pair squats with deadlifts.

If you normally belt up or wear knee sleeves for only your heaviest sets, blow the dust off of them and wear them for these workouts in the name of safety. Remember, even though the loading is light in a relative sense, your recovery time will be limited and your heart rate will probably never go down for the entire 20 minutes.

Keep yourself safe and sound so you can focus on building some conditioning while simultaneously getting a great hit for the involved muscles. Treat it like you're lifting your 3 to 5-rep max by approaching each set with the same level of focus.

As an aside, there's no shame if you need to take some of the weight off between sets. So it's smart (especially for the pressing movements) to load smaller plates onto the bar instead of bigger plates to make it easy to change weights between sets when you only have 40 seconds to do it. 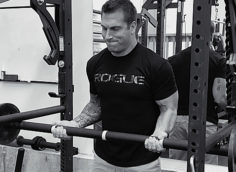 Drop the EZ-bar curls for a while and try a few of these ramped up biceps builders.
Training
Jason Brown January 18 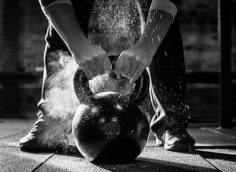 Don’t get pinned. Here are the five main reasons you get stuck at the bottom of a bench press.
Bench Press, Powerlifting & Strength, Training
Dave Tate October 26