In the world of sports coaching, game day is all that matters.

You can have the best practices, the most cutting edge training programs, and every restorative measure that you can cram into an athlete's already hectic week, but if you come up short on game day the plan was a failure.

And there are no A's for effort in high-level sports, often just a meeting with the powers that be informing you that your coaching contract won't be renewed. See you in the soup kitchen.

To that end, smart coaches look at many variables to produce a championship on meet or game day. These variables stem from a needs analysis conducted by the coaching and administration staff.

However, outside of the few perfect scenarios, coaches will have a limited and time binding period to produce results. For the most part you're looking at a window that varies from 8 to 16 weeks, and if you're lucky that's a healthy window that's not mucked up by post-season rehab or surgeries.

Considering this harsh reality, I started developing a system when I was coaching college athletes prior to my time in the NFL that combined performance feedback (through Charlie Francis's Vertical Integration) with good old chalk-dust science.

It's a progressive system and is based on my belief that you have to reactivate or stimulate the neurological/myofibril connection to accelerate a return to previous strength levels or new progressions.

The Speed of Sports

We know the amount of Motor Unit Activation (MUA) is related to the body's ability to overcome resistance by way of gradations of contractile strength – meaning as the resistance increases, our body continues to increase the number of active muscles fibers until we overcome the resistance or collapse against the load.

However, although this is the basic premise of increasing MUA, if you just go into the gym and start loading the bar until you've crushed it, you'll be singing Goodnight Arlene and see you on the dust pile of broken dreams and washed-up athletes.

The solution is to do it with techniques that trick the body into thinking it's under a greater load or stress than it really is.

The body is the epitome of efficiency and it will only do the work that it thinks it needs to. For example, if you can bench press 450 pounds for one repetition and you load the bar with 250 pounds, you'll only turn on enough muscle fibers to bench 250, not the whole enchilada.

To help you wrap your head around this, let's look at three early season techniques designed to trick the body into doing more work without having to drop a piano on the athlete's back.

This should be the primary movement because it takes away the myotatic reflex (stretch reflex), which decreases the body's natural movement pattern and efficiency.

Losing the stretch reflex mechanism also limits the potential load on the joints and connective tissue, increasing the MUA even with lighter weights.

For best results, it's important to achieve a complete relaxation between reps – simply holding a weight on your chest isn't going to cut it. The athlete has to turn "off" and then turn "on" with every rep, so you'll need to set the resistance on catch pins at the start of concentric range, even in box squats. The rest between repetitions should be at least 3 seconds.

So as an example, when doing incline presses, set the bar on a set of pins placed at chest level. Set the bar on the pins after each rep, pause at least 3 seconds, and then press the bar up.

The next progression from dead start movements are incomplete movement patterns. This uses a myotatic mechanism but also serves to confuse the body.

The technique I prefer with 1 1/4 movements requires an incomplete concentric on the initial overcoming phase.

For example, during a squat the athlete would go down into eccentric as usual, but on the concentric would stop a quarter of the way up. There would then be a momentary pause before sitting back into the hole, followed by an explosive final concentric ending in a standing position.

The 1 1/4 movement benefits MUA in a couple of ways: it increases the total time under tension of a given repetition and it stimulates a panic button when the initial concentric is not completed, making the brain go, "Hey, what the hell? All hands on deck, something happened!"

This is an awesome activation and strength progression to dead starts and 1- 1/4 movements. It's more stressful to the connective tissue and central nervous system but it also teaches the body to light up the neuromuscular response to stress like New Year's Eve on the Las Vegas Strip.

To perform this technique you can either recruit the assistance of a spotter or set up static braces that you push against. With the bench press, for example, you'd initiate the concentric phase of the press and during the rep the spotter would place eccentric resistance against the bar, slowing your movement to a stop.

As this occurs the body basically says, "Hey, get the f**k off!" and fires the engine hard until the spotter relinquishes, allowing the rep to continue. A 3-8 second mid-rep fight against an isometric force is ideal.

An alternative would be to push against pins at varying joint angles during the concentric phase, but never completing a full rep.

Here's a sample 9-week torso program using the above progressions:

* the tempo is to adjust for the extra movement – you don't pause on your chest.

It should be said that these techniques aren't easy. And if you're just an every day gym rat with little athletic background that just wants to look better in your Fruit of the Looms, you'd be best served choosing a less demanding training protocol.

However, if you're a conditioned (or formerly conditioned) athlete that needs to get into game shape fast, then this is just what the coach ordered.

Many great things have come from environments where winning is the only acceptable outcome. These systems, and the results it produces, are no exception. 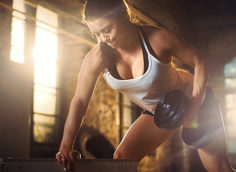 Women today are kicking butt in the gym... for the most part. But some are still making the same old mistakes, and a few new ones. Here they are.
Bodybuilding, For Women, Training
Charles Staley May 11 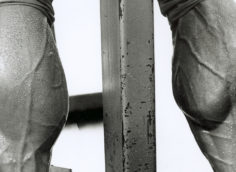 In four weeks, you can build the best calves of your training career. Warning: It's going to hurt — a lot.
Training
Ellington Darden, PhD December 1